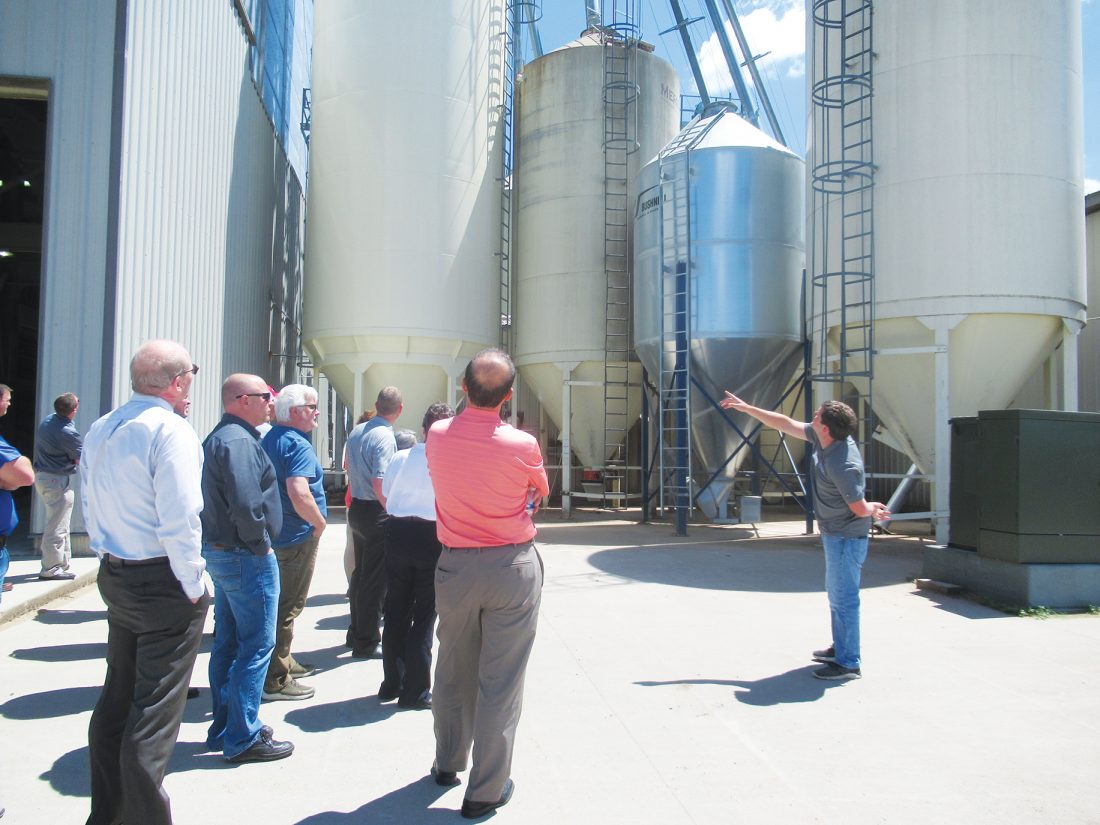 MARSHALL — Pigs are big business in Minnesota — the state is one of the top pork producers in the country, after Iowa, Greg Boerboom said. Part of the reason is because the Midwest is where the pig feed is.

“By and large, the hogs are raised where the corn is raised,” Boerboom said. But while pork production is important for area farmers, the pork industry also has a global reach. And swine production has become both more efficient and more high-tech over the years.

Marshall area residents got a chance to learn a little more about the pork industry on Tuesday as part of an Marshall Area Chamber of Commerce AgriBusiness event held at Boerboom Ag Resources. Groups including local businesspeople and ag educators toured Boerboom Ag Resources’ feed mill east of Marshall.

Boerboom Ag Resources started out with the Boerboom family farm, Greg Boerboom said. Now, their pig production business has grown to include two sow farms, partnerships with two Pipestone Systems managed farms in South Dakota and with WholeStone Farms in Fremont, Nebraska, a feed mill, and contracted growers raising pigs. Boerboom estimated they would market around 325,000 pigs this year.

Pork production in the U.S. has increased 120% since 1960, Boerboom said. However, the number of sows in the country has stayed the same.

“We’re just that much more efficient,” he said. Pig farming today also uses less water and land than it did 50 years ago.

For Boerboom Ag Resources, raising pigs from birth to market is a process with three phases, Boerboom said. The first phase is the sow farms. Boerboom Ag Resources’ newest sow farm, built in 2017, uses open pen gestation, he said. Pregnant sows can move around freely in open pens and visit feeding stations whenever they want.

“It’s kind of driven by consumer preference,” Boerboom said of the industry shift toward open pens.

The sow farm also uses an electronically-controlled feeding system. An RFID system keeps track of each sow’s diet, and dispenses the right amount of feed for them, Boerboom said.

Once the piglets born at the sow farms are weaned, they are raised in nurseries. Then, when the pigs weigh about 35 to 60 pounds, they are sent to contracted growers. Boerboom said the pigs will weigh between 280 and 300 pounds when they’re sold.

Finishing pigs has become a way for area farmers to diversify their business, Boerboom said. Having a source of pig manure for fertilizer is also a plus for contracted farmers.

“For a lot of them, that’s their motivation,” he said. The nutrients in pig manure “just matches what you need for crop acres beautifully.”

“I think of our full-time employees, about 15 of them are graduates of SMSU,” he said. SMSU doesn’t have a degree program in animal agriculture, but Boerboom said Boerboom Ag Resources has trained graduates who liked working with animals and were independent thinkers.

“We hire the agronomy and agribusiness majors, and convince them that pig production is the way to go,” Boerboom said.

Boerboom said the business also has three employees from Mexico, sponsored by the TN visa program. The visa program has helped the business find workers with the skills needed for working in the farrowing unit or as pig breeders, he said.

For biosecurity reasons, the tour groups couldn’t go inside a swine barn at Tuesday’s event, Boerboom explained. Protecting against the spread of diseases that could kill pigs is a major concern for pork producers around the world, he said. Barns use safety measures like air filters and disinfection procedures to help keep pigs healthy.

Protecting pigs from African swine fever is one of the biggest challenges facing the industry today, Boerboom said. While it’s hard to get exact numbers, he said, the disease is taking a toll on China’s pig herd.

A quarter of U.S. pork is exported to other countries, and exposure to a disease like African swine fever would have “an immediate, devastating impact to our pork industry,” Boerboom said. “It’s a daily conversation among pork producers.”