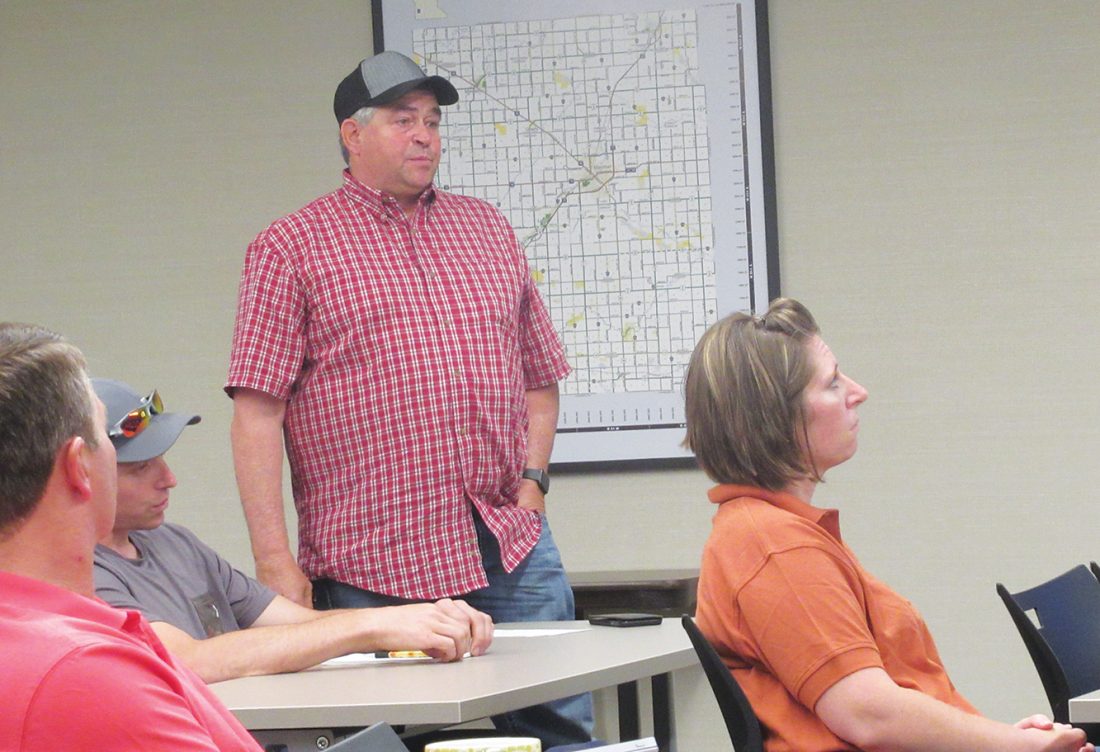 Photo by Karin Elton Joel Vandeputte spoke at Tuesday’s Lyon County Board meeting on behalf of Lake Marshall Township about the DNR’s proposed acquisition of 247 acres of land in that township.

MARSHALL — Bird watchers, hikers, pheasant and deer hunters will have a new wildlife area to “tromp around in,” said a DNR official.

Lyon County commissioners approved the acquisition of land by the Department of Natural Resources at their regular board meeting Tuesday morning.

Area Wildlife Supervisor Wendy Krueger presented the proposal to the board, asking for its approval. Randy Sook from Northwestern Farm Management and Paul Stoneberg, attorney, spoke on behalf of the current owners, Mark and Becky Doyscher.

The land, about 277 acres, is situated about 5 miles southeast of Marshall in Lake Marshall Township, parts of Section 25 and 36 in Lyon County. The cost to the state is undisclosed at this time. It doesn’t become public until the close of the sale. A “chunk” of land will be donated upon the sale, said Krueger. Payment in Lieu of Taxes (PILT) will be a factor in the sale. The payment is made to the county, but then is distributed to the townships based on acreage of DNR lands as well as to the school districts similar to a normal tax statement.

The land is adjacent to the existing Meadow Creek Wildlife Management Area. Acquiring this new land is a plus because access to Meadow Creek has been problematic, Krueger said.

“This gives us better access to the Meadow Creek property (via 290th Avenue),” said Krueger. “The only access (to Meadow Creek) is difficult to traverse.”

Another benefit is that much of it is already “an established habitat,” she said. “It has native grass and flower plantings.”

About 10 acres of grassland is Conservation Reserve Program (CRP). About 16 acres to the west is highly erodible land.

“We could restore that to a mix of native grasses and forbs (deep-rooted plants), which would help with erosion,” Krueger said. “It’s an excellent fit for us.”

In addition to established native grassland plantings, food plots for deer, wood cover plantings and restored wetlands can be found on the property. It benefits wildlife and will provide enhanced access for hunting opportunity and for wildlife management activities. The land would be open to the public, to hunters, which is good to manage the deer population, to bird watchers, photographers and hikers, she said.

Currently, 15.7 acres is farmed on the west side of the property, but the field contains some steeper slopes and erodible soils.

The Doyschers have previously tried to sell the land, said Sook, who is a licensed real estate broker.

“We’ve offered it different ways. The size of the property is not practical to split it,” he said. “The land doesn’t provide income and they still have to pay taxes.”

Krueger said “when the state purchases a property, that triggers the county board approval process.”

Stoneberg said under state statute, the DNR needs the board’s approval, “but if you disapprove you are required to state valid reasons.”

A few neighbors attended the meeting and voiced their concerns about the amount of weeds on the property which impacts their property. They were assured by Krueger and Sook that the thistle problem would be addressed by the Doyschers and thereafter be maintained by the DNR.

“The DNR has equipment to get noxious weeds under control,” Krueger said.

An audience member suggested grazing would be a good way to get rid of weeds. Commissioner Rick Anderson said it works well in Minneopa State Park near Mankato with the bison.

“(Grazing) is one tool in our toolbox we are starting to utilize,” said Krueger.

The road was another source of concern. Krueger proposed a gate would be installed near the end of the dead end road, to be opened only by DNR and nearby landowners.

Ron Prorok from Pheasants Forever and also the Marshall Convention and Visitors Bureau, said the land is a “great acquisition for us. We believe once you get signage and gates, 99 percent of hunters will comply.”

Prorok then put his CVB hat on and reiterated Krueger’s point that in the hunting seasons, nearby restaurants, gas stations and hotel would see an increase in customers.

“It’s a really good draw for this part of the region,” he said.

Commissioner Charlie Sanow told Krueger the county just found out about the proposed sale on Thursday. He said he didn’t appreciate the lack of notice to the board about the land acquisition. It didn’t give county staff time to prepare.

“It’s a little disrespectful to bring something forward with that short of notice,” Sanow said. “In the future that needs to be addressed.”

Krueger said she gave the township board notice May 8, but agreed that the county board should have had more notice.

“We can improve on that,” she said.

In addition Sanow wanted an assurance that the DNR would pay the 4.5 percent ditch (County Ditch 7) assessment, deal with the weeds and put a gate up to allay traffic on the nearby road.

Anderson expressed misgivings about the amount of land that the state already has.

“How much do we really need?” he said.