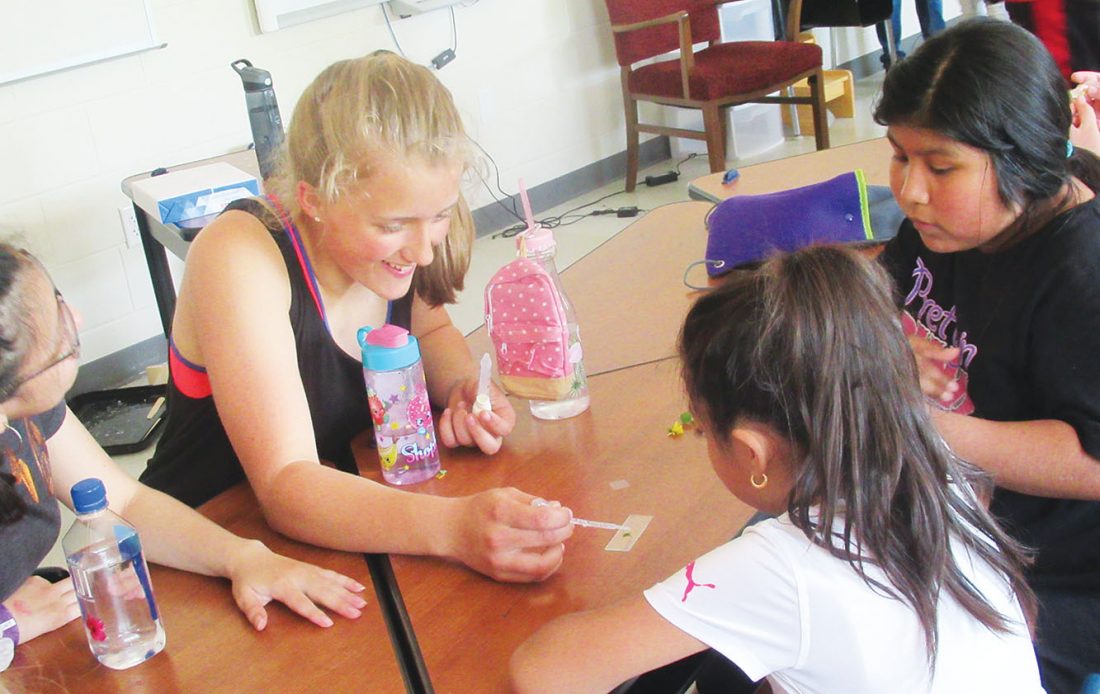 Photo by Karin Elton A Lynd Public School student Mallory Evans applies a drop of water to a slide Thursday morning for a science project in which students had to find three specimens of plants outside and then look at them on slides through a microscope.

“A little higher than usual,” he said. “We had to put some on a waiting list.”

Angel Chavarria, a sixth-grader, picked an oak leaf, a dandelion that has gone to seed and a “purple something” outside which he brought into science teacher Martin Boucek’s classroom. Boucek had directed the group of students, who range from fourth grade to eighth grade, to go outside and pick three plant specimens.

In the classroom, each student was given a slide onto which they could place a tiny sample. The students put a drop of water on the slide followed by a top slide.

“The water ‘glues’ the two pieces (slides) together,” Boucek said.

Boucek said the exercise was to give kids an introduction to the microscope.

“The older students have used them but the younger ones haven’t,” he said.

Fifth-grader Charlotte Korman peered through a microscope at a piece of a dandelion in full bloom.

Meanwhile, in another classroom, first- and second-graders weren’t picking plants, they were planting them.

Roshawn Galle gave students a sunflower seed to place deep in the soil in a little pot “that will disintegrate, so if you want, you can plant them right in the ground,” she said.

She had the kids put “about 10 drops” of water into their pots. Galle was about to say a fascinating fact about sunflowers when second-grader Anisha Damle commented, “they follow the sun.”

“Yes, I was just about to say that!” Galle said. “They start out facing east and then turn in the evening west.”

Damle said her mom has always wanted a sunflower. Damle knows about sunflowers from firsthand observation.

“At my grandma’s lake house, my friend, who is a next door neighbor, they have sunflowers and I was looking at the sunflower and saw they were copying the sun,” Damle said.