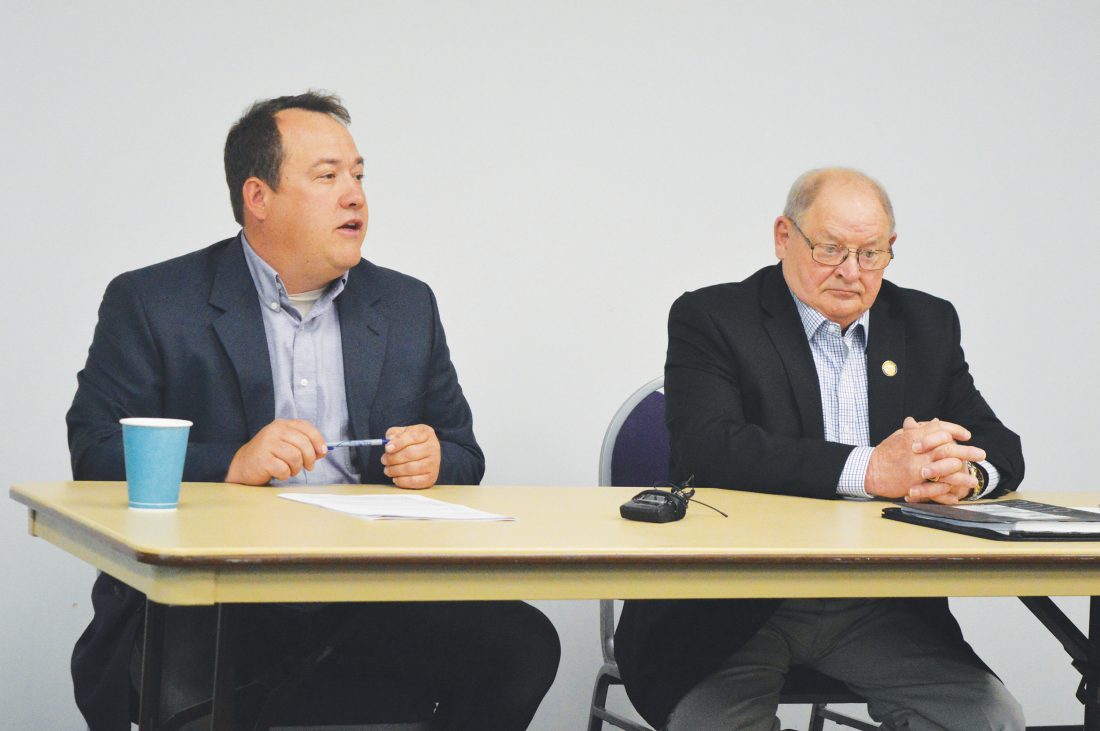 Photo by Deb Gau Minnesota state Rep. Chris Swedzinski and Sen. Gary Dahms recapped some of the important legislation of the 2019 session, as part of a town hall meeting in Marshall Tuesday morning.

MARSHALL — The 2019 session was unusual in a few ways, and came with a lot of compromises, state legislators said at a town hall meeting Tuesday morning. But in among those compromises were some positive results, like increased tax credits for agricultural land, and increased funding for education, transportation and Local Government Aid.

“It was a very interesting session,” moving quickly both at the very start and the very end, said Sen. Gary Dahms, R-Redwood Falls. Gov. Tim Walz and leaders from the Legislature were able to reach an agreement on the state budget, and lawmakers went into a one-day special session.

“I don’t think it was a deal anybody was really excited about,” Dahms said. But he added that it wasn’t necessarily a bad thing — the lack of excitement was a sign there wasn’t one party getting everything its way.

“It was a little more unique way to end the session,” Rep. Chris Swedzinski, R-Ghent, said. But at the same time, he also said it wasn’t all bad. “To a large extent, it was one of the smaller growth sessions, as far as budget increases.”

Dahms and Swedzinski said the session was unusual in other ways, too. The Republicans were in the minority in the House, which Swedzinski said was a new experience. Dahms said there was also a lot of policy negiotiation at the Legislature, something that doesn’t typically happen in a budgeting year.

“The DFL decided this year they wanted to put a lot of policy in the bills,” he said.

Although there were compromises, Swedzinski and Dahms said there were some positive outcomes to this year’s session. Dahms noted Minnesotans will see their first tax reduction in a long time, although the reduction is small. One of the Legislature’s early actions this session was to pass a bonding bill, which Swedzinski described as “kind of a cleanup from last year,” that included funding for water treatment projects like water softening in Marshall.

“A fairly large part of that bill greatly benefited our part of the state,” Swedzinski said.

There were also some positives in education, both for funding schools and easing tax burden on farmers. The per-pupil school funding formula will increase by 2% for each of the next two years. Putting the funding increase into the general formula was a good move, because it was fairer to rural schools, Dahms said. “A student in Marshall gets the same amount of money as a student in Minnetonka.”

The Ag2School tax credit for agricultural land has also been increased from 40% to 50%, and will gradually increase to 70% over the next few years.

“I do have a little concern about that,” Dahms said. He said he hoped the state wouldn’t go after the tax credit if it was facing hard financial times.

While a gas tax increase didn’t get passed this session, Swedzinski said Minnesota would be keeping its general fund spending for transportation infrastructure. Plus, Dahms said, $100 million of new money was put into transportation. Additionally, he said there would be a study in the next year or so to track what transportation funding is used for.

Another area resident asked what was being done for area roads and bridges damaged by flooding. For example, there were roads in Redwood County that were still closed from damage in last summer’s floods.

“It’s not isolated, it’s widespread,” he said. “That stuff needs to get fixed.”

“That’s why we’ve been putting new money in,” Dahms said.

Swedzinski and Dahms said legislators did do several things this year to support child care in Minnesota, including putting money into childcare grants. Swedzinski said legislators also looked into how to adjust the rules about how many infants and children child care providers can care for.

“We found a lot of those aren’t necessarily set by statute,” he said. Finding a solution might need to involve changes within state agencies, he said.

Swedzinski said he also thought it would benefit child care providers in Minnesota if the state allowed early childhood funding to follow children, instead of going to early childhood education programs at school districts.