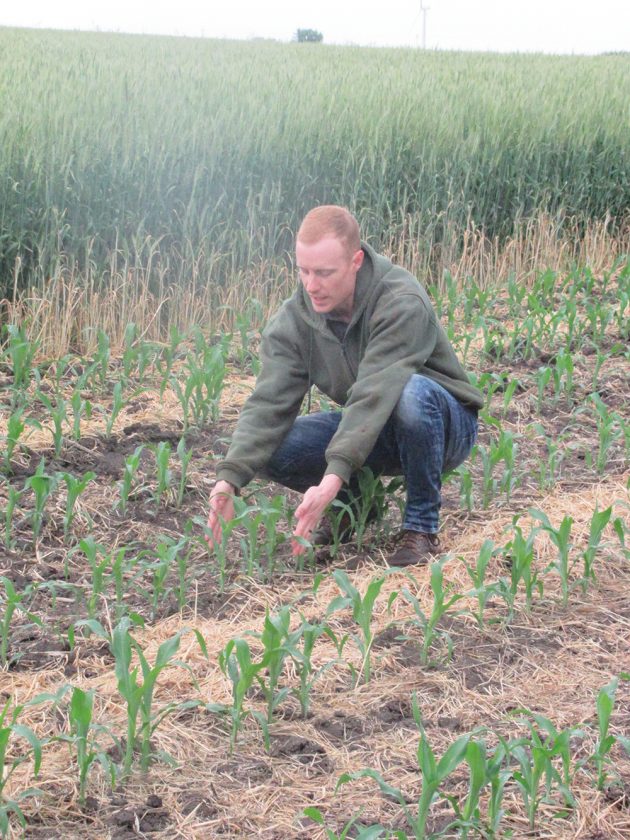 Photo by Deb Gau Ryan Tholen talked about corn plantings in a different part of the research farm’s fields.

BALATON — It was all an experiment, Randy Tholen said. At the Tholen research farm in rural Balaton, rows of soybean plants were growing nestled in between strips of rye. The plan was eventually to harvest both crops, first the grain and then later the beans.

“We’re not really sure what’s going to happen here,” said Randy’s son Ryan Tholen. But although the Tholens didn’t know how the experiment would pan out, one thing was clear — rye planted last fall had managed to tolerate both an extreme winter and a very wet spring. On a field day held at the farm Monday, the rye stalks were standing about waist-high compared to the visitors led out into the fields to take a look.

“Rye is an extremely resilient crop,” Randy Tholen said. Both he and Ryan talked about their experiences planting rye, and intercropping it with soybeans.

The field day included both a trip out to see the rye the Tholens planted, and discussions on how to grow and market rye with representatives of Albert Lea Seed, and Claus Nymand of KWS Cereals USA.

Rye is a grain that is used both as food for people and as hog feed, Nymand said. Hybrid varieties of rye are bred to be less susceptible to diseases like ergot, and can be planted in southern Minnesota. In this region, hybrid rye should ideally be planted by mid-September, Nymand said.

The Tholens’ experiment with rye started out last fall. Their research farm in rural Balaton makes use of cover crops to help stop erosion and improve the soil. But Randy said he and Ryan were also looking into other farming methods.

Then, he said, “We stumbled across this hybrid rye,” and wondered if it could work in relay cropping with soybeans. The Tholens worked with Nymand to start growing rye, he said.

The Tholens planted 50 acres of hybrid rye, Ryan Tholen said. They had contracted with a grain milling business to sell the rye crop. Another part of the field included rye intercropped with rows of soybeans planted using no-till methods. The beans were planted in May, the Tholens said. Meanwhile, the rye began to develop ears of grain earlier this month.

Another part of the field that visitors toured was an area of corn planted in narrow strips to try and allow the plants to get more sun, he said. That part of the field made use of cover crops, including rye, Randy Tholen said.

The experiment with intercropping soybeans and rye isn’t finished yet, but the field day drew a good- sized crowd, Tholen said.

“I was glad to see the interest there was in relay cropping,” he said.