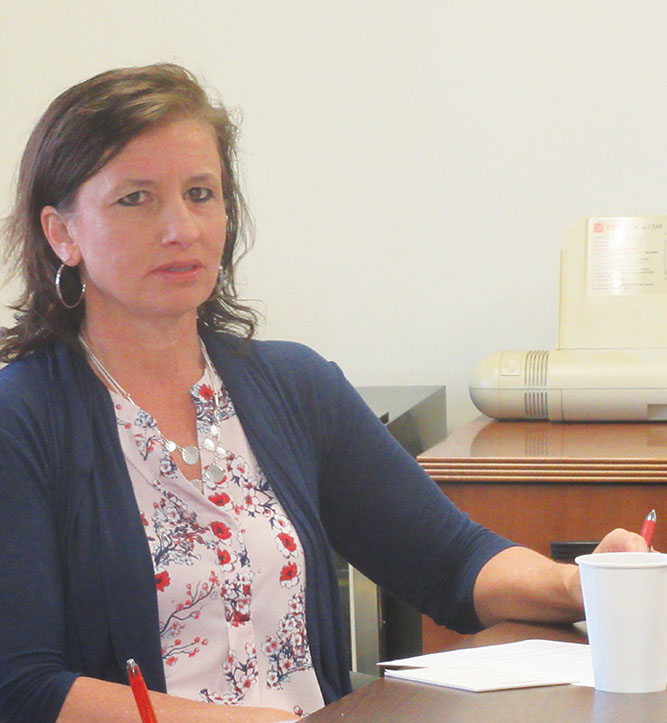 She could have gone longer, she said, but just gave an update on the city of Marshall’s activities as they relate to the downtown area.

Hanson started out by expressing appreciation for the MDBA.

“Thank you for all you do in promoting downtown,” she said. “I know this past winter was tough for business on Main Street and downtown. Hopefully, we’ll pick up business now that it’s nicer weather.”

Hanson said visitors to Marshall are always amazed with the different businesses to be found.

The city has taken a number of steps to promote downtown such as new banners on Main Street.

“This year was the first year we put up the snowflakes,” she said. “I know a number of you supported the banners monetarily and the city council voted to make up the difference. It’s a nice look for Marshall. I’ve had a number of good comments.”

The city is undergoing a re-branding and business consultants will be visiting the downtown area and elsewhere on an “orientation tour” getting to know Marshall businesses.

Another new thing to look forward to in downtown Marshall is the renovation of city hall.

“In 1914 it was originally a fire, police and city hall,” she said. “We’re going to keep those historical roots, incorporate some of those original features. We want to get rid of that ramp/step front entrance by taking out the first floor and drop it, lowering the first floor so you can just walk into it. The cost will be $6 million. That is non-staff. But the cost has risen because of inflation and the floor lowering.”

“As far as the hotel next door (to city hall), we did have a developer interested,” she said. “But we haven’t been able to come up with a good finance mechanism. There are some positives, the hotel is in an opportunity zone for any investors who have extra cash they want to shelter. Another positive is it’s on Main Street with tax value, tax capacity. Not a bad bargain. The parking lots are maintained by the city. We have had interest from other developers.”

Hanson said eventually, if no developers buy the building, the city will demolish it and redevelop it.

“There won’t be a hole on Main Street,” she said.

And speaking of Main Street/Highway 59, the Minnesota Department of Transportation is “finally fixing” the spot on the road past Casey’s that has been sunken in.

“The other parts are concrete and there is not enough structure to maintain that road,” she said. “There is a lot of traffic on 59 and 19.”

Highway 19 will undergo construction by the DOT in 2025.

“That’s a long ways off, but time flies,” Hanson said.

The intersection of College Drive and Main Street/Highway 59 will see some development.

“We’re looking at demo-ing where the taxi was and that will be a good tax capacity,” she said.

A facade improvement program is ongoing where the city will match 50/50 new signage and awnings.

“We started out small to see what kind of interest there is,” Hanson said. “Hopefully that will be successful. We’ll work with local sign companies.”

Another area that needs to be improved is the Marshall Aquatic Center which opened Saturday.

“Our pool is outdated,” Hanson said. “It loses 10,000 gallons of water a day. The structure itself is falling apart and we’ve had electrical issues with our panel as well. We’ve done some replacement there. From preliminary renderings, research, a new pool is going to be expensive. We would take that to the community for a vote to see if there’s support for doing that. We think that will definitely bring in visitors to town. In the next five years we’re looking at something.”

Marcotte owner John Full said he was grateful to the city for snow removal.

“We’re definitely over budget,” said Hanson. “We were in 2018 as well. The budget is a guess what we’ll need, but there were areas of the budget where we underspent, so overall 2018 was under budget overall.”

With the snow gone, the city is looking at people’s lawns.

“Right now (Dean Coudron, street supervisor) is looking at all the long grass,” Hanson said. “Some of the buildings are forfeited.”

The MDBA members said to Hanson it would be beneficial if a city representative could attend their monthly meetings to keep them updated.