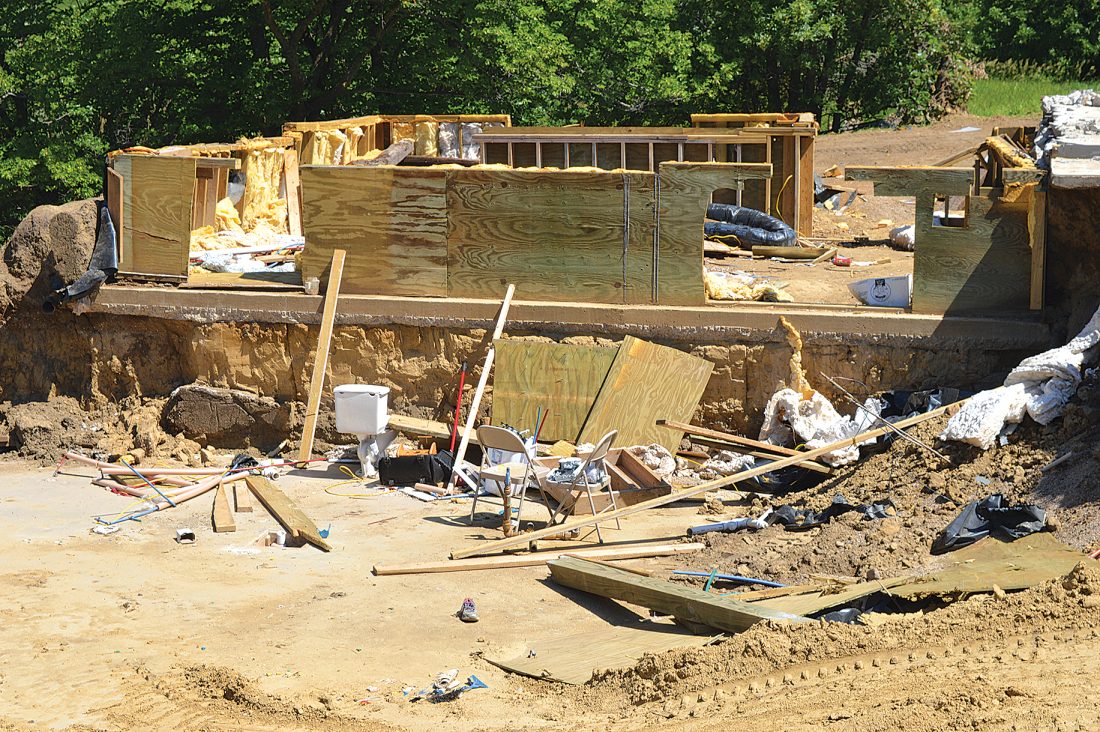 Photo by Karin Elton The foreground shows the half-basement of the Jeppesen home and the foundation of their home after it was moved to another spot on their 10-acre property.

CANBY — People are usually happy to have home siding — not so much home sliding.

A big chunk of land dropped over 10 feet right next to the house of Jessi and Brent Jeppesen’s house 8 miles west of Canby.

A slab of cement can be seen resting on the cliff wall.

“That’s my walkout patio,” she said.

She peered over the edge at what used to be her garden and said, “At least my hostas made it through.”

The rains last fall and the snowfall this spring had a devastating effect on the Jeppesen home.

On May 30, the hill their house sits on began sliding, slowly pulling the deck and patio off, and overtaking the above ground well. Then the foundation began to separate from the north wall and the soil began to slide beneath the home.

“Our bedroom corner came off its foundation because the ground beneath it was moving,” Jessi said.

The Jeppesens placed plastic sheeting on part of the newly-formed cliff to protect it from further rain so that the water wouldn’t infiltrate cracks and break off more land.

They consulted an engineer from the Natural Resources Conservation Service who advised them to vacate their home immediately.

“The engineer said there was no way we can save it,” said Jessi. “We left that night.”

Another soil and water engineer, from the Twin Cities area, said the hillside shift was “the worst he’s ever seen,” Jessi said.

The Jeppesens’ first thought was at least they had homeowners’ insurance. But they were told they weren’t covered for “earth movement.”

The family has had the support of family and friends. They are staying with Jessi’s parents, Marty and MaryAnne Grabow, who live nearby.

Jessi said her in-laws, Lois and Curt Olson and Greg Jeppesen, have been helpful as well. In addition, friends and neighbors have come over with food and help. The family needed assistance clearing the basement out, moving items to a shed and trailers.

Friends have set up a gofundme.com page, https://www.gofundme.com/f/jeppsen-family, to help with the expense of moving the house and garage up the hill. The costs include: digging a basement at the new site, putting in new basement walls and floors, moving the house, fixing siding, replacing the existing electrical, sewer, and water, and reattaching the garage. The estimated cost is over $50,000.

“I was super uncomfortable at first,” Jessi said about the financial help.

“I love helping people get their life back in order with safety and structure,” she said.

Her husband, Brent, is an independent contractor, which is helping with construction costs.

“He has been working nights and weekends on the house in addition to working at his business,” said Jessi.

Jessi said her husband has been “super positive” throughout the whole ordeal.

“(Solving the problems together) has brought us even closer,” she said.

The Jeppesens called Thein Moving Company out of Clara City to see if they could move their house.

“They took me seriously when I said we needed help fast. We called them at 10 a.m. on a Friday and by noon they were out here to tell me if they could move (the house) or not,” she said. “They were very good to work with.”

Seven days later, the house was moved. In the meantime Brent was able to cut the garage off the house. Thein came Thursday and moved the garage to the new space and the following day, the house.

“We were lucky the house could be moved because there was worries that the ground wouldn’t be stable enough (for the large equipment),” she said.