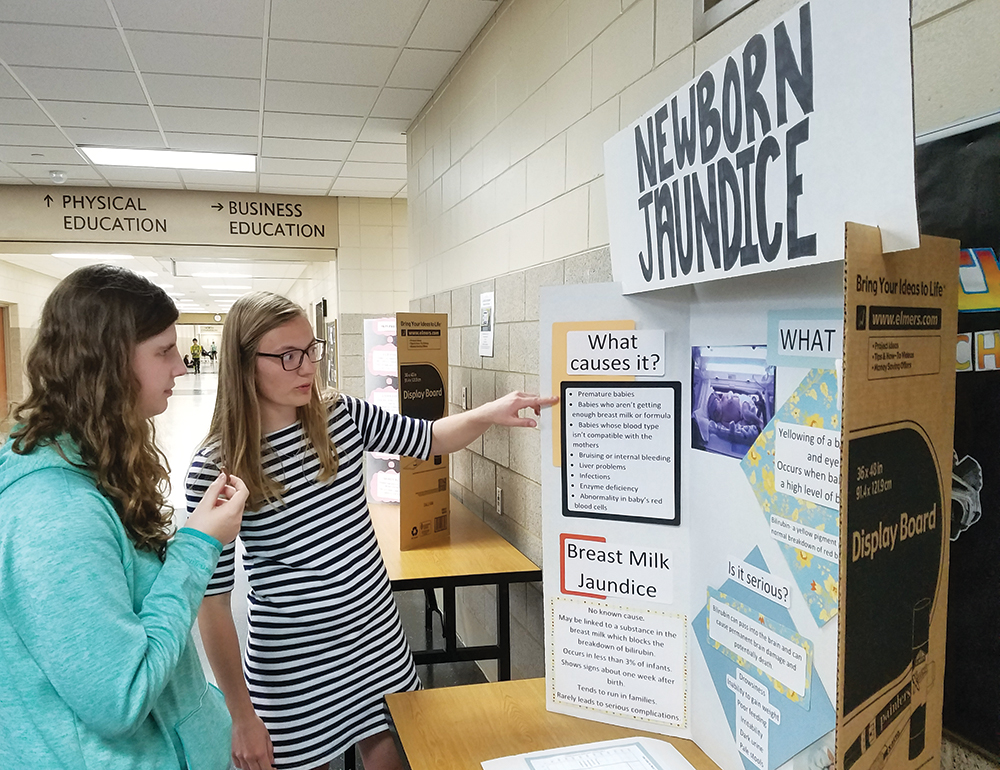 Photo by Mike Lamb Marshall High School student Kaitlyn Matzner explains her display on newborn jaundice during the career intern class open house on May 22. Matzner looked into a nursing career during an internship at Avera Marshall hospital.

MARSHALL — Before his senior year at Marshall High School, William Moua knew he wanted to do something with athletics for a career.

Cole Remme remembers his junior year trying to figure out what he wanted to do after graduating from high school. He struggled in math and didn’t like science — but enjoyed history and writing.

Kaitlyn Matzner thought about nursing as a profession. But of course she had no idea what it would be like to work as a nurse in an actual hospital setting.

Thanks to career programs at Marshall High School, all three were able to get a firsthand look at career choices during their senior year before graduating this past spring. That was because of a class taught by teacher Brenda Kellen called career internship. It’s a dual credit class that allows students to explore a career through an internship format while receiving credit through the high school and also at a post-secondary institution.

Moua, Remme and Matzner joined other students attending the class in setting up displays about their internships inside the Marshall High School hallway on May 22. Principal Brian Jones joined parents, teachers and others to look at the displays.

He listened intently as Moua talked about his internships and why he chose it.

He plans to attend Southwest Minnesota State University to major in sports management. He chose that field while taking the career internship class.

“I wanted to do something with athletics. I have a small figure, so this (sports management) is the best way for me. She (Kellen) told me about athletic directing. I got that in my head and it sounded interesting to me,” Moua said.

The career class led Remme to an internship with the public defender’s office.

“I actually got to meet with some of their clients. I got to sit in on some court hearings. I even got to take a day from school and go sit on a trial — which was super cool,” Remme said. “When I first got into it, I thought I would get to to sit in this guy’s office and watch him do work. But when I got there, they were like, ‘here’s your office.’ ‘Whoa, I get my own office.’ It was a lot more hands on than I expected. I looked at police reports and squad car videos.”

The experience helped Remme decide that law would be his career path and will be attending Gustavus Adolphus College in St. Peter. He plans to major in political science and double minoring in music and criminal justice.

Matzner did her internship inside the delivery department at Avera Regional Medical Center.

“I wasn’t able to do anything because I’m not licensed, but I was able to observe. I learned a ton by just observing. Which was cool. Then I decided I want to go into nursing,” she said. “I would love to work with babies, in labor and delivery. I think that would be super cool. Or just with kids.”

Matzner will be attending Dordt University in Sioux Center, Iowa, and majoring in nursing.

According to Kellen, students can sign up to do an internship if they meet all program requirements. She then helps the students find an internship sponsor. Avera has been a long-time participant, along with teachers within the school district.

“I try to help them find a job site and a mentor where they can go and really kind of observe and try it out. Try to see what it’s all about before deciding to go to college. We’re hoping it saves them college tuition money,” Kellen said. “As you talk to them, most of them are excited about certain careers. Sometimes you find out from the kids, ‘oh, that’s not what I really thought it’s going to be.'”

Kellen has been teaching the class since it started in 2005. She said the class has been worth college credit since 2008.

She has worked with a variety of internship mentors.

“I have had everything from a butcher, to a landscaper and a mechanic, a farmer — all the way to anesthesiology, doctor and a surgeon,” she said.

Park Side Elementary second-grade teacher Cheryl Hoff has been a regular mentor in the program. This past school year, Hoff worked with Kaia Sueker.

“Kaia was amazing,” Hoff said. “She just came in and jumped right into action. I would tell her if saw a student who needed help, she would assist that student. She did anything from assisting a student to taking on a small group.”

Sueker also assisted in speech pathology at True Life Christian School in Marshall. During a presentation delivered to the school board in May, Sueker joined other students in talking about their internship experiences.

“I really enjoyed doing both,” Sueker told the board members. “But I decided to pursue speech pathology. There are many different avenues like school settings, clinic or a hospital.”

Sueker said she is going to attend the University of Mary in Bismarck, North Dakota.

“Mostly it’s students wanting to go into nursing units,” Kayser said. “Being a nurse is different like in the emergency room versus a behavioral health unit, verses the clinic.”

Kayser said providing internships to high school students fits well with Avera’s mission to give back to their communities. But it’s a workforce issue as well.

“If we can get them in here and they have a good experience, hopefully they are going to want to come back and work for Avera,” she said.

But beyond the career class, there are other related programs offered at Marshall High School. Jones addressed those programs during the board meeting.

“At the high school, we offer a variety of career and technical programming,” Jones said. Some of those career technical education courses fall under the “agriculture umbrella” such as basic home ag. There is also maintenance and ag structures that allows students to actually build structures such as storage sheds.

“Our students provide in the way of labor and those businesses in turn sell those structures,” Jones said.

In the business department, Jones said there are opportunities in accounting, advance accounting and other classes that lead to a skill or workforce development.

There is also family and consumer science and industrial technology that involves woodworking, metal fabrication and automotive repair and maintenance.

Marshall also participates in Launch Your Future Today, which serves southwest and west central Minnesota. It allows for the collaboration between schools to deliver career and technical education. Under that umbrella, Marshall offers Project Lead the Way (engineering pathways) and exploration in aviation. Project Lead The Way provides transformative learning experiences for preK-12 students and teachers across the U.S.

“Two different programs, but two programs that address areas of high employment needs that have a very strong industry outlook in the foreseeable future,” Jones told the board. “We hear constantly about our shortage of engineers and they also see a shortage of folks in the transportation industry. So this (exploration in aviation) focuses on that small segment of the aviation industry. Through these opportunities, we are trying to get our students some real-life experiences.”

Angel Garcia had an interest in aviation and was looking for a flight school.

“I looked at the prices. They range from $8,000 to $12,000. But then I saw our school offer the flight aviation school. So I decided to take the opportunity,” Garcia told board members.

Jones said the course was taught by a certified flight instructor at the airport.

“The classroom portion of this program focuses on the ground school part and prepares the students to take the FAA written exam. That’s the first step that they will have to pass in order to get their private pilot license,” Jones said. “When they get done with the class, they are not yet ready to get their private pilot license, but they get a start on it.”

“Which is probably enough to see if it’s something they have an interest in,” he said.

“It was a fun, fast-paced course,” he said. “There was some simulators that were really fun. They were pretty realistic. We got most of our experience there. And we also got some flight hours as well.”

Trey Weber participated in an engineering design course at Lakeview School as part of the Project Lead The Way program. He said the class met two days a week.

“I think the class was really a good opportunity. Especially for someone like me because I plan to go into engineering,” Weber said. “It kind of gave me the experience that wouldn’t have gotten if I had not taken it (class as Lakeview). “It prepared me to go to the University of Minnesota.”