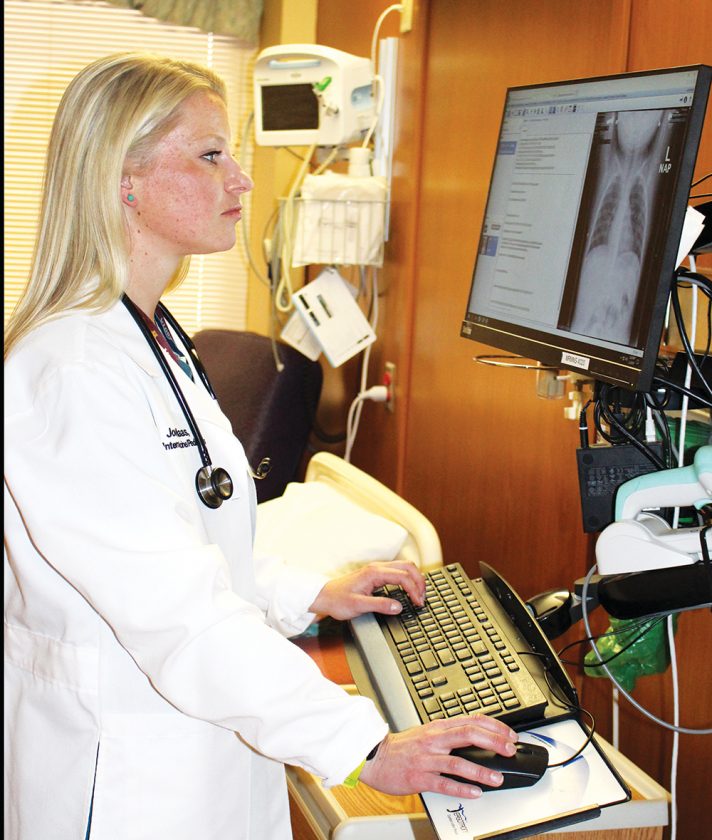 Maas is a recent addition to Avera’s team of hospital doctors, who make decisions about whether or not patients should be admitted to the hospital. That means deciding whether an illness is serious enough to require hospital care but not serious to the point that it demands services of Avera facilities in Sioux Falls, S.D.

She’s been on the job for eight months. It’s her latest step after eight years of post-secondary education followed by four years of medical residency.

Her interest in health care began to take shape while growing up on her family’s dairy farm, located north of Walnut Grove in Redwood County.

“I used to tag along with the veterinarian when he came out to the farm,” Maas said. “At first I wanted to be a veterinarian, but later decided I should be a doctor because of how it’s based on people. I chose to have patients I could talk to.”

The choice was reinforced by her mother’s work for Redwood Area Hospital as a hospice nurse in the western part of the county. Occasionally she needed to go along if her mother was called to help a hospice patient during a ride home from school.

As a high school student, she excelled in volleyball, basketball, track, band and jazz piano. She also served as the student council president.

She chose to pursue dual specialties in internal medicine and pediatrics. She also set her sights on becoming a hospital doctor because of trends in medical staffing as well as the opportunity to use her professional and personal skills.

“The faster pace of a hospital practice appeals to me,” Maas said. “Family practice doctors play an important role by treating all kinds of medical conditions for their patients. The hospital patients are often at risk of having a critical situation. I’m comfortable with the challenges those situations bring.”

As a hospital doctor, she works five days in a row with about 12-15 hospital hours every day. It also means being on call to respond at a moment’s notice at any point between late evening and early morning. She has 10 days off between each five-day turn in the rotation.

Decisions about admitting patients involve careful review and consultation with other doctors, often both family practice physicians and specialists.

Admission is likely if a patient is temporarily unable to eat without intravenous feeding tubes. Another frequent reason is a need for monitoring by trained medical professionals.

Avera Marshall has an intensive care unit, one that’s designed for intensive care that ranks at a lower level on a scale of need. Maas said the question of an emergency transfer depends on whether the Marshall-based unit can handle the medical issues at hand.

One example involves kidney dialysis. Although dialysis is available locally, it is only designed for outpatients. Someone who is in need of both dialysis and inpatient care would have to be transported. That can be handled either by ambulance or by helicopter if a condition is immediately life threatening.

“In any situation, it’s very important for a hospital doctor to know how to communicate,” Maas said. “Being admitted to a hospital is always at least somewhat scary. I need to be as supportive as possible for both the patient and family members.”

She added that she always draws strength from happy endings, any outcome that involves seeing a patient improve and then be allowed to return home.

Most days on hospital duty involve a combination of good and difficult developments for patients between the ages of toddler and older adult. Challenges are more likely when a combination of medical issues interact.

The ratio is much more on the plus side for infants. They usually sail through a careful pre-discharge screening process that considers diagnostics such as a baby’s weight, vision, hearing, food tolerance, heart health and reflexes. Even a less-than-perfect result for infants can turn out positive since something that’s identified is often fully treatable.

“The biggest challenge for hospital doctors is the need to switch hats,” she said. “We go from seeing the elation of a new baby or a good prognosis to the need to help another family deal with bad news. It’s important not to let one situation affect how we handle others.”

Hospital doctors are playing a much wider role in the delivery of medical services than they did a generation ago. Formerly something that was mainly found only in the largest medical centers, it’s now a standard in most medium-sized facilities.

“There’s more of a need for it because of medical advancements,” Maas said. “It’s led to a wider range of options and more complicated decisions. Family practice doctors therefore had more of a challenge balancing hospital visits with their outpatients at clinics.”

Avera Marshall proved to be well-suited to Maas’ search for a location to practice medicine. There was a need to add someone with both internist and pediatric specialties to fill out the hospital rotation.

It also meant coming back to the hospital where she gained her first direct on-site medical experience through a high school job shadowing process. As her career plans progressed, she learned from Avera doctors Vince LaPorte, Steven Meister, and other role models. At times she draws from life experiences that go as far back as being treated for childhood ear infections by Dr. Tom Odland.

She looks forward to continuing her lifelong professional growth in southwestern Minnesota. She often interacts with family members from the Walnut Grove area on days off, and sometimes even for short dinner breaks subject to on-call results. Her fiance, Adam Schrader, is also located in the region as an attorney with the Amundson and Johnson law firm in Spicer.

“This is a great opportunity to help people,” she said. “It’s also a very good place to keep learning and growing. I looked closely at eight hospitals, four in the metro area and four in greater Minnesota. Avera Marshall was always the first choice.”

Her third grade teacher, Paul Olson, is now WWG principal at the Walnut Grove campus serving grades K-6 from throughout the district.

He said Jonna and her brother, Jared, both still stand out in his mind as two of the brightest and most versatile students he’s ever had in class.

At the time, he guessed that Jonna might become of the world’s best newscasters because of her people skills, plus the ability to back it up with plenty of talent for gathering and interpreting information.

“No matter what I planned for the students, she always excelled,” Olson said. “She has a combination of problem solving ability and people skills that allowed her to become anything she wanted to be. She’s putting all of it to very good use in the medical profession.”

Maas’ high school student council adviser, Carolyn Enstad, remembers her as an excellent choice for council president. She added that the way she approached her duties on the council reflects a strong potential on her path toward success in medicine.

“She has a way of looking ahead for the best possible outcome,” Enstad said. “She also knows that other people are an important resource. She wants to involve them and use their input.”