‘Praying for a miracle’ 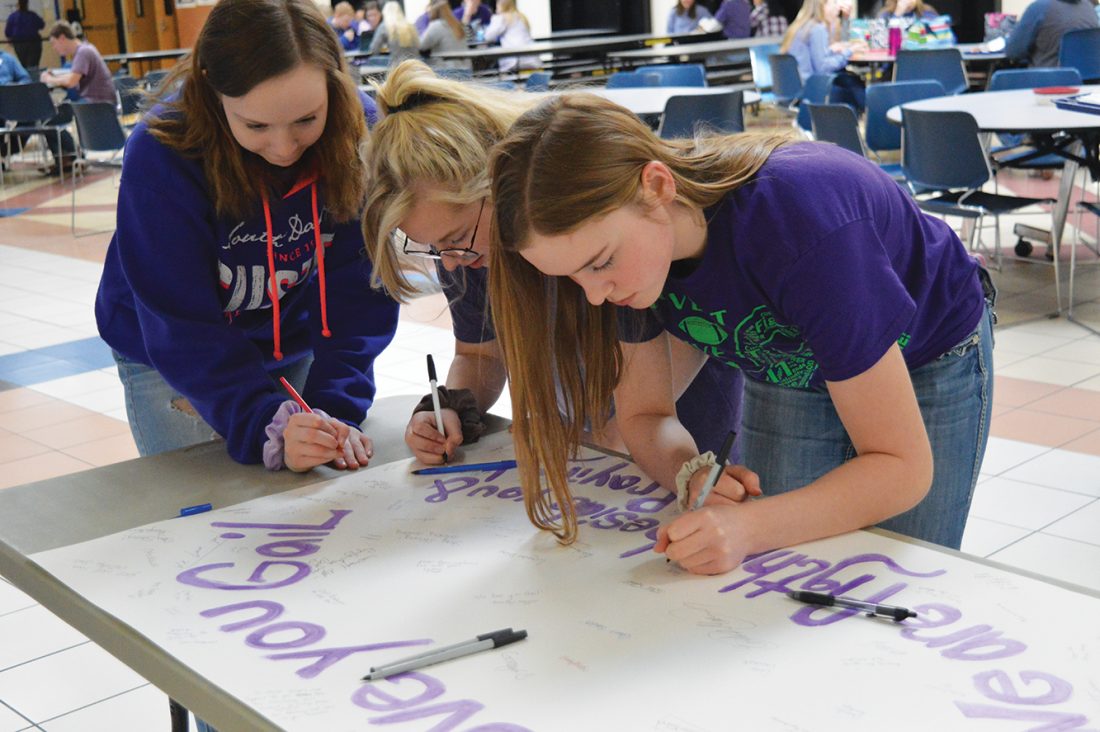 Photo by Karin Elton Lakeview students sign a poster in support of bus driver and substitute teacher, Gail Gregoire, who is recovering from a brain tumor and stroke.

COTTONWOOD — Lakeview students and staff wore purple, the color of hope, Wednesday in support of their bus driver and substitute teacher who is gravely ill and hospitalized.

Gail Gregoire went in for routine surgery in Willmar on Feb. 20, and was to go home on Feb. 21, according to a post by Gregoire’s sister, Mary Krenik, on caringbridge.org. Things were going well until late evening Feb. 20 “when she started to feel ill. Overnight she was vomiting and complained of a headache.

“On Thursday (Feb. 21) morning, these symptoms continued and the decision was made that she would remain in the hospital (in Willmar).Late Thursday afternoon she was found unresponsive in her room. Her physicians believe she had a massive stroke which caused her to slip into a coma. She had a CT scan of her brain, where a brain tumor was found and the stroke was confirmed. She was rushed by ambulance to St. Cloud Hospital. She had an emergency surgery to relieve pressure on her brain and to help with swelling.”

The Caring Bridge post continues with the narrative, saying Gregoire was placed in the Intensive Care Unit after surgery.

“Her condition was stable throughout Friday (Feb. 22). Friends, family, and her church community rushed to be by her side to encourage and pray with and for her and her friends and family.”

Shannon Geihl, a longtime friend of Gregoire’s, said the tumor was “the size of an orange. It’s touch and go. We’re praying for a miracle.”

Geihl said Gregoire is “very well known in the community, and is a friendly and positive person. If she doesn’t know you, she will introduce herself. She loved her job as a bus driver.”

At Lakeview Wednesday, preschoolers through seniors participated in events to show support. The kindergartners performed a song which was videotaped. At a pep rally for the wrestlers, the band performed “Lean on Me” by Bill Withers. The student body signed a poster that says, “We love you, Gail. We are fighting beside you & praying!”

Scott Hanson, grades 7-12 principal, said he wants to give a “shout-out to all the teachers and the staff” for organizing the events Wednesday. “It’s to show that we are right along with her in her fight. It’s a testament to this community that they go above and beyond to show support. We want to show our support for Gail and her family.”

Lakeview junior Cody Caron said Gregoire is the youth leader at his church, Swan Lake Evangelical Free Church in Cottonwood. Swan Lake had a “Night of Worship For Gail” Saturday and has set up a location to donate, which will go toward helping with any monetary needs that will arise. For more information, visit https://www.swan lakechurch.org/giving.

According to the Lakeview Schools’ Facebook page, a fundraising store has been set up to help raise some funds for the Gregoire family. The store will be open until Sunday. https://gailgregoire19.itemorder.com/

LeRoy’s Bar and Grill and Lotus Nutrition in Cottonwood also have fundraisers set up. A note on LeRoy’s Bar & Grill’s Facebook page says, “The staff here at LeRoy’s have been heartbroken for Gail and her family. She is a delightful lunchtime regular who’s always made us smile. We will be giving out ribbon to anyone who wants to show their support. We will also be accepting donations for the family.”

Gregoire is also sells Mary Kay cosmetics. She is a star team leader and their Monday meeting was a “Gail Gathering,” where they taped a message for her. Janet Chapman, senior sales director, said the Mary Kay representatives were asked to write one word that represents what they think of Gregoire. Chapman then made a video and brought it to the hospital in St. Cloud to Gregoire.

“(In the video) each person held up their card and said why they thought that word represented Gail,” said Chapman.

Chapman said Gregoire often wore her “Queen of Sales” crown on the bus when she was driving, which the kids got a kick out of.

Gregoire’s recovery will take a long time, according to Krenik.

A Monday post says, “if there is to be a recovery, it would be months, years in a skilled care facility. The damage that has occurred is in her brain stem. The brain stem part of our brain controls the body’s temperature, heart rate, blood pressure etc. all of the vital components to life.”

The latest Caring Bridge post is from Wednesday and notes that Gregoire “appears to be resting peacefully. She now wears purple nail polish as a sign of her love for community.”

Gregoire and her husband, Steve, have three children together: Ramzi, Gabby and Giselle, as well as Steve’s children, Ellen and Whitney.