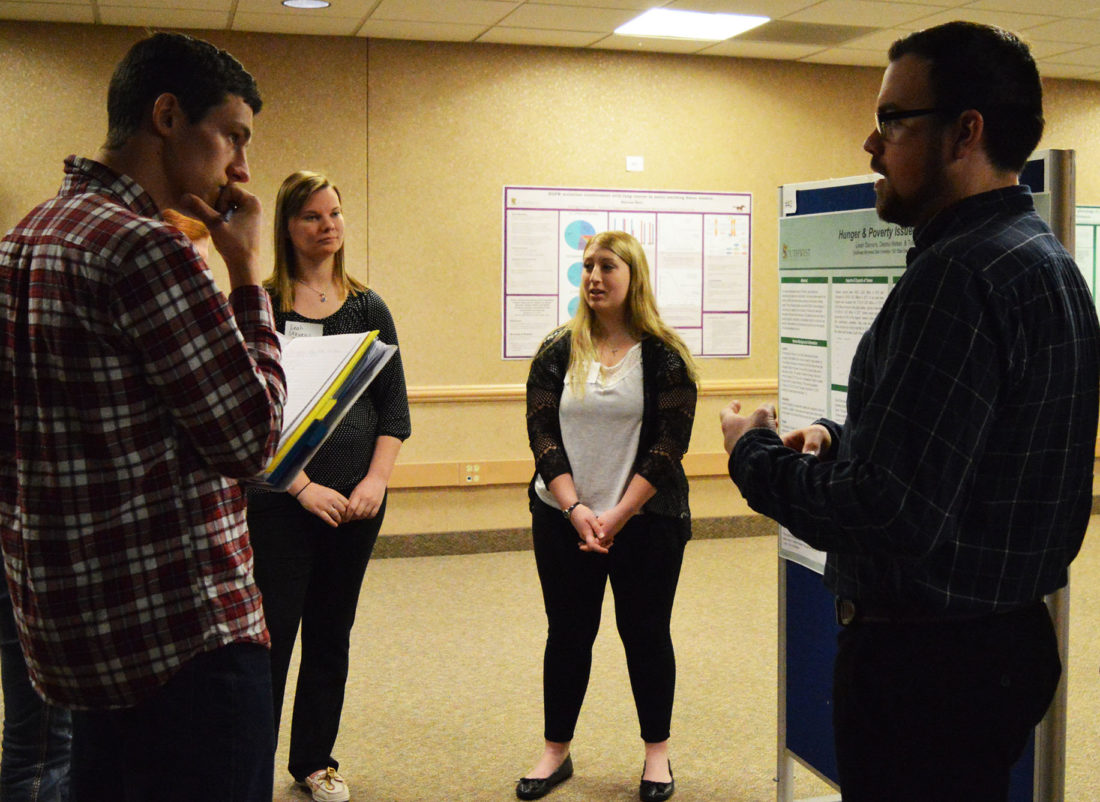 Photo by Jenny Kirk Fellow students (in the foreground) Melissa Downing and Asa Nelson ask questions of presenters Leah Stevens (not pictured), Deena Weber and Tyler Molitor during the 13 annual Undergraduate Research Conference on Wednesday throughout the campus at Southwest Minnesota State University.

Agribusiness students Leah Stevens, Deena Weber and Tyler Molitor researched and presented hunger and poverty issues in Yemen, one of the oldest areas of human civilization in the Middle East.

“One of the issues in Yemen right now is the war,” Weber said. “It’s really affecting them. It’s definitely affecting their agriculture economy. It’s making it where they have little access to water. And they can’t really get any imports in. They rely on a lot of the imports so there’s a lot of hunger, poverty and malnutrition going on.”

“Most are trying to live on less than $2,000 a year,” she said. “They have to try and evenly spread that income out over the year. It makes you realize that we kind of take for granted what we have.”

The students said Yemen’s exports are really limited because of its climate.

“Their soil fertility is just not very good,” Stevens said. “They’re receiving, on average, less than 12 inches of rain a year.”

Molitor said people in Yemen are in a rough spot.

“They do have irrigation, but they just don’t have much water in total,” he said. “And what they use most of their water for is called qat. It’s a plant that you chew on their leaves and it causes excitement, euphoria and lowers your hunger. That’s their major product, but they can’t really export it because a lot of places consider it a drug.”

The trio found that 75 percent of men and 25 percent of women in Yemen chew qat all day, every day.

“They don’t have much money, but they do seem to purchase a lot of that,” Molitor said. “It suppresses hunger, so that’s probably a big reason why they choose to chew that. But if they could use a lot of water and put it toward crop production, they’d have a lot more food available to them.”

Molitor said he focuses most of his research on the imports, exports and agriculture.

“We see that they were growing, but the last few years, they’ve taken a dive,” he said. “They’re not doing well at all. It’s because of the exports and a lot of that has to do with the war.”

Weber pointed to a graph on the poster board that showed an enormous decrease.

“Here’s 2016 and the major part, the actual civil war part of it started in 2015, so there’s this dramatic drop right there,” she said.

Molitor added that part of the issue has to do with the commodity prices dropping.

“Yemen is just not very competitive,” Molitor said. “As the market gets harder to compete in, those who are less competitive are going to end up getting an even smaller share. They’ve got a 6.5 billion U.S. dollar deficit in their trade. So the little bit of money they do have is just going out of the country.”

Drilling deeper wells in search of fresh water is one of the solutions the group came up with.

“That could potentially be a solution,” Weber said. “Another solution we talked about was desalination, so they’d be able to use the Red Sea’s water for drinking and for agriculture.”

Molitor said one positive is that the fishery sector is growing in Yemen.

“They’re surrounded by three different large bodies of water,” he said. “They have large quantities of species that are in high demand and a lot of other nations around the world are starting to regulate their fishing industry, so consumers are coming here to find cheaper, high-quality species and different food to eat.”

“I read an article that the women are having between four and five children,” Stevens said. “That’s quite different than the U.S. because on average, we’re having two or three. It’s just so expensive to raise children nowadays. So we thought that access to birth control could help.”

Like a lot of other developing countries, Yemen traditionally had high birth rates as well as high death rates.

“As first world countries go into third world countries and help them with their health, what’s happening is the birth rate stays high, but the death rate falls,” Molitor said. “So the growth rate rapidly accelerates. Then in a situation like this, where there’s very little food or water — and the water they do have a lot of times is contaminated — the infrastructure is poor. You’ve got a huge birth rate and things just go downhill from there.”

Molitor, Weber and Stevens said what is happening in Yemen is a tragedy.

“If we can get the war to stop, then there’s a chance they can turn this around,” Weber said. “But even then, it’s still going to be really hard to accomplish what they need to.”

Among the 29 different faculty advisers involved is environmental science professor Dr. Emily Deaver, who got the Undergrad Conference going. She said it is gratifying to see its growth. At the first conference in 2006, there were only science students in environmental science, biology, physics and chemistry involved.

“We have 17 different disciplines and one of the things that is different this year is that we have philosophy students presenting both posters and orals for the first time. It’s really exciting to see even more disciplines getting involved each year.”

Deaver said the research process includes a different kind of learning for students than in the classroom setting.

“Many of these projects are associated with a class, but they have to do different kinds of learning rather than sitting in a lecture and getting fed information or doing canned lab kind of things,” she said. “It’s much more focused with a lot of 1 on 1 interaction between the faculty and the student.”

As a result, Deaver said it takes “really dedicated faculty” who go above and beyond their normal teaching load.

“It really says a lot about how dedicated our faculty are in helping our students learn,” Deaver said. “The students do excellent presentations and they learn a lot in the process. They gain a lot of confidence in addition to just learning how to do presentations, how to analyze information and present it to the general public.”

While the level of projects varies, disciplines like political science and sociology use the conference as a capstone.

“In environmental science as sophomores, they do a group project in botany class and do a poster,” Deaver said. “Then next year as juniors, they do a group project and do a group oral presentation. As seniors, they do a year-long, independent research project and present an oral by themselves. It’s sort of a scaffolding kind of thing. More and more are using the conference as a capstone, where you bring together all the things from your major into one presentation. It’s really fun.”

Hundreds of other SMSU students also take part in the conference through various class requirements. Deaver asks her intro to environmental science students to pick three or four presentations and write up a paper detailing what they saw and learned.

“In that class, I have 75 students enrolled from all different majors,” she said. “Oftentimes, English faculty will have their students come and write reaction papers on the event. A lot of faculty will require students attend at some time.”

With a diverse group of students, it’s not surprising that the topics varied a great deal. Philosophy student Kelly Regan probed ethics regarding euthanasia in society and found that six U.S. states have legalized euthanasia or physician-assisted suicide.

History student Colin Hoppe researched the largest mass execution in human history, noting that while the U.S.-Dakota Conflict of 1862 lasted only five months, but left a long-lasting scar not only on Minnesota, but also on the nation.

Environmental science student Hunter Czycalla explored lichen populations on different types of granitic rocks in the Minnesota River Valley, while philosophy student Jessica Stai pondered veganism and whether or not people should join the bandwagon.

Biology student Gus Molina found that the central complement protein C3 is unknown, but that it’s discovery may improve treatments.

“I think this is really preliminary,” Molina said. “I think Alzheimer’s disease has so many different factors that affect it. This is only one aspect of it. C3 is part of our immune system. It’s naturally in us to protect us from any diseases or anything like that. What these two studies that I did were looking at were what affect C3 has on Alzheimer’s disease.”

Molina said Alzheimer’s is characterized by the formation of amyloid plaques — proteins in the brain — and neurofibrillary tangles.

“What they were noticing is that having C3 or removing it actually caused better cognitive function in mice by not having C3 there,” he said. “So maybe it’s not these plaques and fibers that are causing the cognitive decline. It might be our own immune system, our C3 cells, that affect it.”

“It was a lot of work,” he said. “Researching and reading these two articles, trying to understand what they were saying, probably took 100 hours. Then preparing the poster took about 20 hours. It took all semester to get to this point. I like learning about the immune system. I also work at assisted living and see patients with early-onset Alzheimer’s, so that kind of drew me to this project.”