Marshall sworn in as chief of police 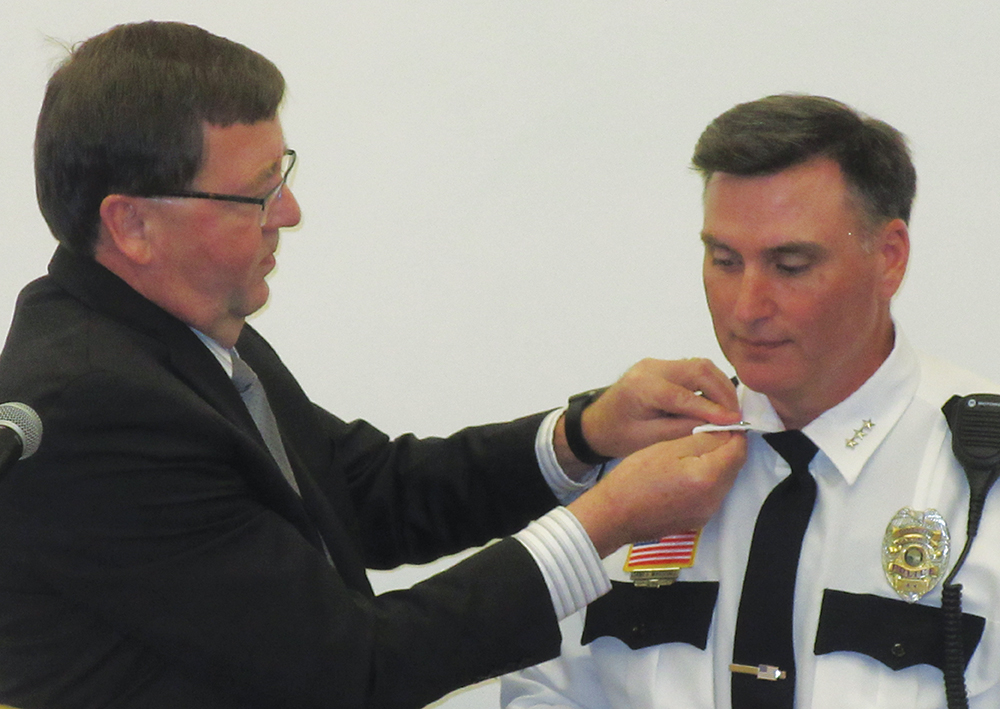 Photo by Deb Gau Marshall Mayor Bob Byrnes pinned three stars on Jim Marshall’s uniform, as a symbol of his new position as Marshall Public Safety Director. Marshall was sworn into his new office during a ceremony Tuesday afternoon.

MARSHALL — The city of Marshall’s public safety department marked the start of a new chapter of leadership on Tuesday as Jim Marshall was sworn in as the city’s new director of public safety.

“I’m both excited and a little nervous,” Marshall said of taking on a new position and responsibilities. But it was OK to be nervous, he said, because it meant those responsibilities were important to him.

“I feel so blessed to be given this opportunity to serve others,” Marshall said.

A swearing-in ceremony was held for Marshall at the Marshall-Lyon County Library on Tuesday afternoon. Marshall, a 26-year veteran of the Marshall Police Department, accepted the public safety director position in September, after previous director Rob Yant announced his plans to retire.

There were a lot of uniformed people in the audience at the ceremony, with Marshall Police officers, and representatives of the Lyon County Sheriff’s Department and North Memorial Ambulance among them. It was fitting, as speakers at the ceremony said the public safety director’s role includes working with law enforcement, the Marshall Fire Department and the Southwest Chemical Assessment Team.

“Those three stars represent different responsibilities and accountability for the public safety director. Those three areas are the Police Department, the Fire Department and the Chemical Assessment Team,” Hanson said. Leaders from those respective services each talked about their agencies’ mission statements, and how Marshall will have a role working with them.

Sgt. Jeff Wenker of the Marshall Police Department read the department’s mission statement, which includes acting as partners with the community and promoting safety, as well as enforcing laws.

“It encompasses everything that (Jim) stands for, and everything our department has been working for,” Wenker said. “I can assure you it will continue doing that with Jim in charge.”

“Our motto is ‘Our family helping your family,’ and the Marshall Fire Department is here to help you and your department whenever you need it,” Henriksen told Marshall.

Rob Yant described the role of the CAT team.

“We’re here to support the fire departments in the 14 counties of west central and southwest Minnesota as well as the city of Marshall,” Yant said. The team is a “rare resource” to support communities during emergencies involving hazardous chemicals.

“Congratulations to Jim, and I know it’ll be a successful continuation of what’s gone on in public safety,” Yant said.

After taking the oath of office, Marshall said he wanted to thank the community and public safety personnel for their support, as well as family members including his wife and his mother.

“At the strong age of 95, she still is a great example of what hard work, kindness and integrity can accomplish. And I’m grateful that I get to share this opportunity with her today,” Marshall said of his mother.

“As I transition into my new responsibilities, I look forward to working with all the employees in the police department, the fire department and the chemical team,” Marshall said. “I am lucky to work beside a large group of personnel that provide high-level services each and every day.”

Area emergency responders’ dedication was something the community saw recently, as firefighters, law enforcement and the CAT team all responded to the large fire at the Southwest Coaches bus garage last week. Responders did their work in cold and hazardous conditions, but never complained, Marshall said.

“They answer the call without hesitation, with courage, and a true, genuine concern for someone in our community who was suffering a tragic event,” Marshall said.