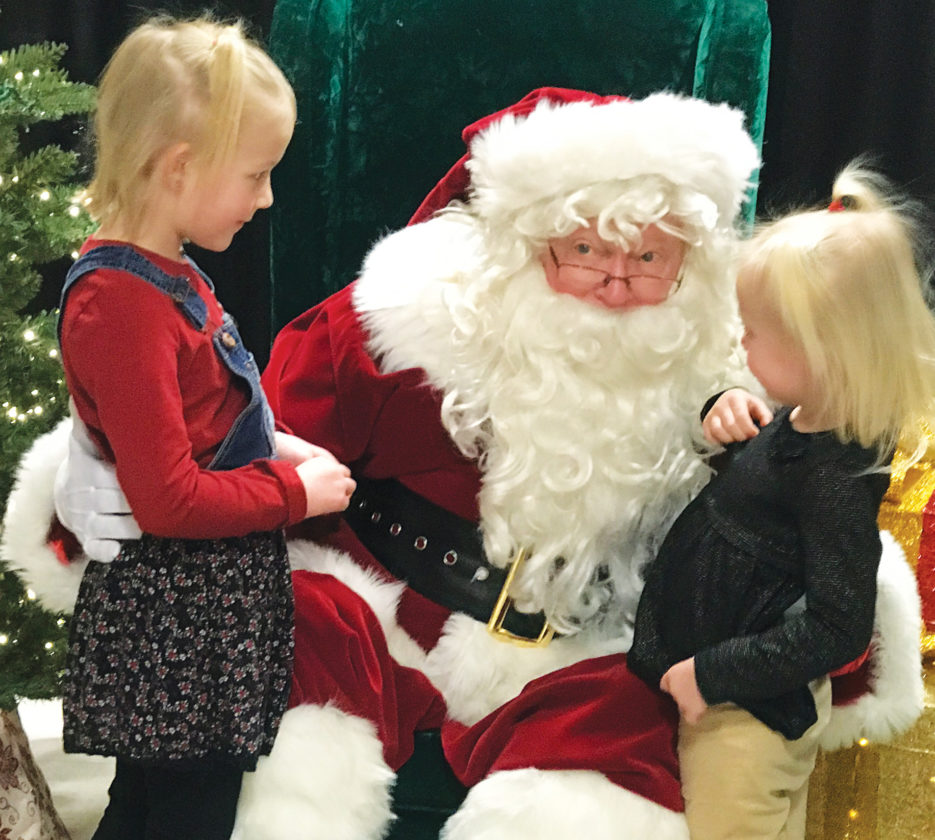 Photo courtesy of Photoworks Bob Cool as Santa Claus talks to some children at Ace Hardware in Marshall in November. Cool has played the role as Santa for 10 years.

MARSHALL — Bob Cool of Marshall applies his people skills to both retail business and to holiday portrayals of Santa Claus.

Cool completed his 10th year of service as the Ace Hardware Santa Claus during the store’s annual holiday sale and customer appreciation event. He started his Santa appearances shortly after he first began to work for Ace Hardware in 2008 as a sales assistant on the showroom floor.

He decided to return to work on a limited part-time basis after he retired in 2006 from his West Main Street retail store called Cool’s Office Supply. The building, which has a corner location across from Wells Fargo Bank, is the current home of The Note Gallery music store.

Cool recalls the store property as one of his childhood Christmas memories.

In the late 1940s, it was Marshall’s downtown Gambles store and was fronted by a balcony. The Santa that appeared on the balcony was portrayed by a Marshall businessman with the last name Holly. He sold shoes in a shop about five blocks away on East Main Street.

“I enjoyed seeing Santa as a kid,” Cool said. “My parents identified very much with the Christmas season. They wanted to pass that appreciation on to their kids.”

His family had a traditional Christmas gathering at the East Main Street home of his parents. The tradition has continued at the home of Bob and his wife, Trixie. It’s where they raised all four of their children; Christine, Missy, Gretchen and Jason.

Along with popular holiday staples such as Santa, Christmas trees and Christmas cookies; Cool said his family has also emphasized religious traditions since they serve as “the reason for the season” throughout the holidays.

He decided to try portraying Santa Claus in 2008 because of the chance to impart the Christmas spirit to the latest generation of young children.

At times he has been surprised by what some of them ask for prior to Christmas morning. An example is how one child wanted nothing except happiness for his mother.

“I’ve heard them tell stories that break my heart,” Cool said. “There have been others that brought hope to my soul. Kids are incredibly innocent, sincere and honest. I’ve noticed that they tend to be just as concerned or more concerned about others than they are of themselves. That’s a really good thing.”

It didn’t take long for him to decide in 2008 that his Ace Hardware Santa role would last much longer than one or two years.

“Within 20 minutes, I could see how much it means to kids and their families,” he said. “I’ll do it as long as I can, until I’m not physically able to do it.”

Ace Hardware managers said they’re happy to have Cool back as their Santa each year because of his soft-spoken way of relating to children.

Diane McCormick, a manager who works with Ace Hardware marketing, said he provides the right combination of enthusiastic holiday cheer and a friendliness that helps to prevent kids from becoming afraid of something that don’t see on a daily basis.

“He has a kind, soft voice,” McCormick said. “Children respond really well to that. He keeps things moving but also takes enough time for them.”

She said the Ace Hardware holiday event serves between 72 to 80 families each year. Cool begins each appearance with a walk around the showroom floor to get noticed and to drum up public interest in talking to Santa Claus.

“One year a little girl ran all the way across the show area to give him a big hug,” said Carol Christensen, who manages Ace Hardware’s electrical and plumbing department. “He’s a natural people person who does a wonderful job.”

Cool has posed for photos with many children and families. Once in a while a photo includes a dog, such as a huge but kindhearted Bull Mastiff named Rita who belongs to Mike Fox, one of Ace Hardware’s general managers at its Marshall store.

“The same qualities that help Bob as our Santa help him to make a big contribution as a customer service employee,” Fox said.

“We started him off in the paint department, but saw almost right away that he should help customers throughout the store. No matter what a customer needs, Bob will find it if we have it in stock. If he doesn’t know where to look for it, he finds someone who does.”