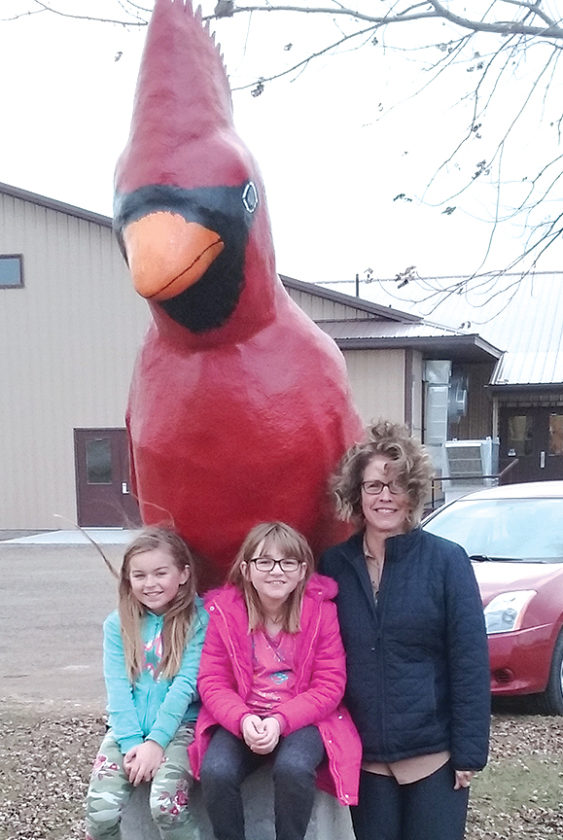 Submitted photo Students and staff at Clarkfield Area Charter School see the cardinal as a symbol that education continues to thrive in the community.

CLARKFIELD — While the city of Clarkfield searches for a strategy to make the best possible use of the former Clarkfield K-12 school campus, the tradition of the Clarkfield Cardinals continues to thrive on the southern edge of the city limits.

The Clarkfield Area Charter School is the home for a giant carved cardinal that towers over students, teachers and vehicles in the parking lot. It was made by Shorty and Larry Miller at the request of charter school officials.

“We told them we wanted a cardinal, and they gave us one that is more than we hoped for,” said CACS principal Kathy Koetter. “It’s stands out for traffic on Highway 59 when they enter or leave Clarkfield.”

The cardinal idea was part of the development process of a charter school alternative that began 10 years ago. It occurred at the same time the Yellow Medicine East School Board voted to realign the grade configuration at its Granite Falls and Clarkfield campuses.

Through the 1993 consolidation of the former Granite Falls, Clarkfield and Echo districts, it was agreed that Clarkfield would have its own K-6 elementary and all of YME junior high seventh and eighth graders. Granite Falls had its own elementary and all 9-12 high school grades. Echo retained its own K-6 elementary, but faced the potential for closure when the enrollment continued to decline.

The school board voted in 1997 to close the Echo campus by an 8-3 margin. As a charter school concept gained steam, the YME board changed its mind with a 7-4 vote to keep Echo open with the idea that would soon become a charter school. It grew into a K-12 campus that now features a recently built gym.

The grade configuration stayed the same for Granite Falls and Clarkfield for 14 more years. That changed when school board members voted to move the two junior high grades to Granite Falls.

The charter school concept took shape with the purchase of a building formerly used as an antique and collectibles store operated by Dan Jahn (known as Peddler Dan). The conversion to a new floor plan led to administrative offices near the front entrance, a lunchroom, media room, classrooms for each K-6 grade school, and a gymnasium.

Parents of K-6 students were left with a choice of the remaining elementary portion at the public or the charter school. More than half chose the charter option, which required multi-age classes at the former K-12 school and a staff reduction to only three teachers.

The YME Board closed the public elementary school a year later, with one board member sharing a point of view that residents walked away from it.

After a period of 11 years with limited building use, Clarkfield faces a need to plan for the future of the public school property.

“We’d like to keep the newer gym and turn it into a community center,” said Clarkfield City Administrator Amanda Luepke. “The rest would be demolished, but it depends on the cost of demolition. It’s in limbo at this point.”

She said it’s helpful that Yellow Medicine County offered to pay half the demolition cost. The next step will be to find out the cost of demolition, which is hard to predict considering the large size of the facility.

It’s not possible to repurpose all of it without spending an enormous amount of money,” Luepke said. “Up to a point, the city could fund its share. If it would amount to something like $1,000,000 to demolish the older portions, it would be more than we could afford.”

In the meantime many community members as well as charter school staff and students see the school’s cardinal as a symbol that high quality education continues to thrive in Clarkfield.

“I like the cardinal,” said fourth-grader Kendra Jahn. “It’s good to have an animal mascot. Having a cardinal is a good symbol of both our school and community.”

“It stands for our school,” she said. “We want to be respectful, kind and honest.”