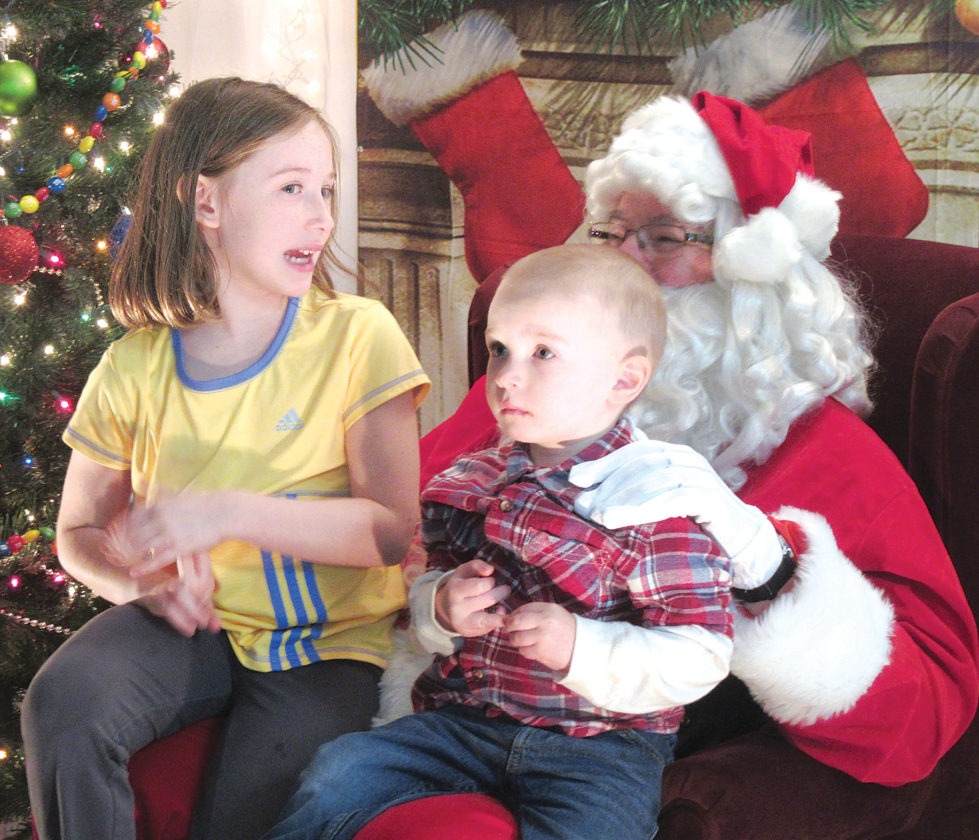 Photo by Deb Gau Karissa Pesch and Levon Homann met with Santa on Saturday morning at Cornerstone United Methodist Church. Breakfast with Santa was one of a few different events held at the church, as part of Cornerstone’s Family Christmas Weekend.

MARSHALL — When they were deciding on a schedule for special Christmas events, members of Cornerstone United Methodist Church ended up making a weekend of it. On Saturday morning, kids were playing games, making ornaments and lining up to meet Santa. By Sunday afternoon, community members were donning robes and headscarves as they got ready to play the parts of Mary, Joseph, shepherds and more for a living Nativity display.

“We enjoy it. It’s a lot of fun being here,” said Gary Vincent. As he spoke, Vincent was decked out in a gold robe with a wreath on his head — he had the first shift playing the Roman emperor Caesar at the start of the Nativity story.

An important part of the fun was sharing it with others, church members said.

Cornerstone hosted three different holiday events as part of a “Family Christmas Weekend.” Community members could attend a breakfast with Santa, a children’s program or the drive-through living Nativity.

The family weekend is a new event for the church, said the Rev. Josh Doughty, pastor of Cornerstone United Methodist. The living Nativity was expanded from its debut last year, while the breakfast with Santa was brand-new.

“I thought it would be a great event to bring to Marshall,” and one that would give families in the community a chance to get together, said Doughty’s wife Kristen Doughty. More than 100 kids in fourth grade or younger attended the breakfast and received stockings from Santa and his helpers, she said.

On Sunday, the living Nativity was returning for its second year at Cornerstone. The event had drawn a lot of visitors last year, organizers said.

“It was really great, and people loved the animals,” Josh Doughty said. It was a chance to see something different, she said.

Organizers said this year’s Nativity was expanded to include more scenes from the biblical story of Jesus’ birth. Judy Kimpe, head of trustees at the church, said Doughty helped with the planning process there.

“He helped with some ideas of (Bible) verses, and to put scenes with the verses,” Kimpe said.

Visitors could drive or walk along West Redwood Street on Sunday evening, and see community members in costume, together with live sheep, goats, llamas and even a donkey.

Planning for the drive-through Nativity “started a couple months ago,” Doughty said. Church members worked on everything from sketching out the backdrops for Nativity scenes, to creating costumes, and preparing food for the performers and refreshments for visitors. Around 40 people, plus a choir, took part in the Nativity cast.

The camaraderie of planning this weekend’s events, and the fun of bringing people together, were an important part of the Cornerstone community, said church member Rennae Petersen.