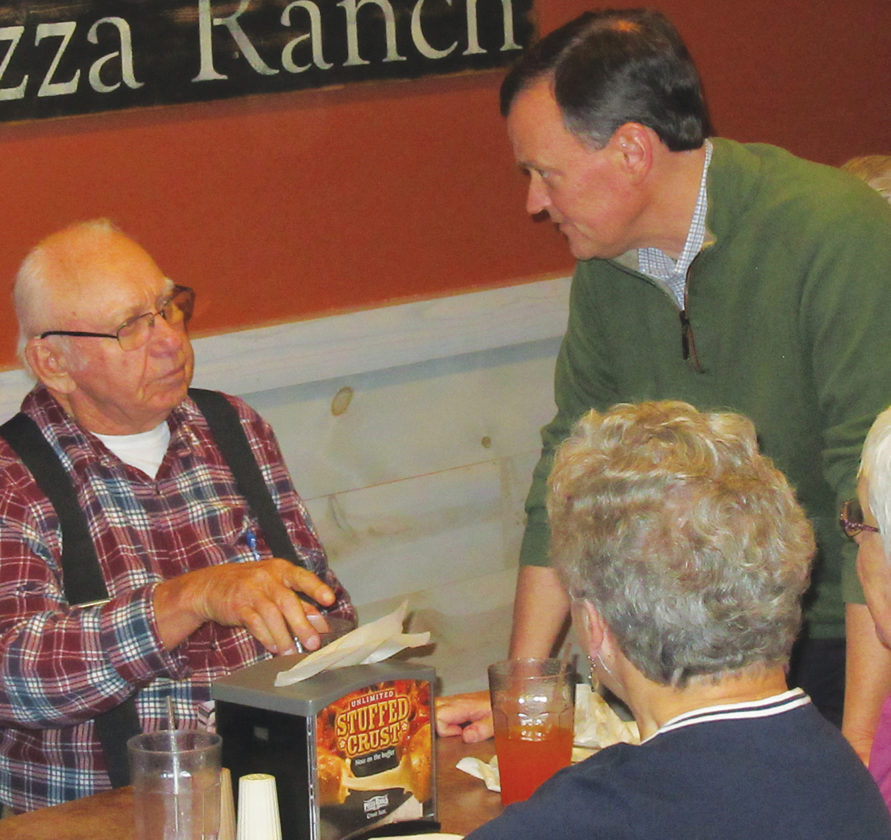 MARSHALL — The mood was pretty enthusiastic for Republican candidates and supporters gathered in Marshall on Wednesday evening. Speakers called on area residents to get out the vote and create a “red wave” in Minnesota’s midterm election.

“We’re going to win because of the grassroots,” said gubernatorial candidate Jeff Johnson, speaking to residents during a campaign stop in Marshall.

“The ‘blue wave’ has to fizzle out, and we have to have that red tsunami,” said state Sen. Bill Weber.

Current state legislators, including Weber, Sen. Gary Dahms and Rep. Chris Swedzinski, and Minnesota governor and attorney general candidates Jeff Johnson and Doug Wardlow, met with voters at the Marshall Pizza Ranch. Wardlow and Johnson were the evening’s keynote speakers, each going over their campaign issues and taking questions from area residents. Earlier in the day, they had toured area towns and industries, including the ethanol plant near Granite Falls and the tru Shrimp facility in Balaton.

Wardlow is running for Minnesota Attorney General. On Wednesday, he said he has been hearing concerns from people around the state about the role of the attorney general — the state’s top law enforcement officer.

“What people tell me most is they want an attorney general who will stand for the rule of law,” Wardlow said. Wardlow said many Minnesotans are concerned about the burden of regulations on industry and agriculture. Minnesota’s buffer law also needed to be dealt with, he said.

“The way it’s being applied right now, there are constitutional questions,” Wardlow said.

Wardlow said if elected, he was going to take a “rule of law approach” instead of using the attorney general’s office for political reasons. That’s something Democrats have done for years in Minnesota, he said. Wardlow had plenty of criticism for DFL attorney general candidate Keith Ellison.

“He wants to use the office . . . to wage a political war with taxpayer dollars,” Wardlow said. He added that if Ellison wanted to make public policy, he should have stayed in Congress.

Besides not using the attorney general’s office for politics, Wardlow said he wanted to make sure Minnesota’s law enforcement and county attorneys have the tools they need to do their jobs effectively. He also said Minnesota needed to act to help fight human trafficking within the state.

Johnson, a former member of the Minnesota House of Representatives, is running for governor, against DFL candidate Tim Walz. The two faced off in a debate in Willmar on Tuesday.

“I thought it went well,” Johnson said of the debate. “It clearly showed we have a difference in philosophy.”

Audience members asked Johnson for more detail on his plan for more affordable health insurance. Johnson said the first major step would be to ensure affordable coverage for preexisting conditions. The next step would be to “force competition into the system,” and help bring down individual insurance costs. Options like encouraging businesses to self-insure, and allowing people to shop for coverage across state lines could help make that happen, Johnson said.

Johnson said tax conformity, and reviving a state tax bill, would have to be his first priority as governor. He also drew applause for his position on the buffer law — Johnson said it was unconstitutional to take private property without compensating the owners.

“I would repeal that (buffer law) and start over,” this time including farmers in the process, Johnson said.

Johnson said there’s a desire for change in Minnesota government right now that could play a big part in this year’s elections.

“There is an energy out there now that is amazing,” he said. People want their state government to be held accountable for its actions.