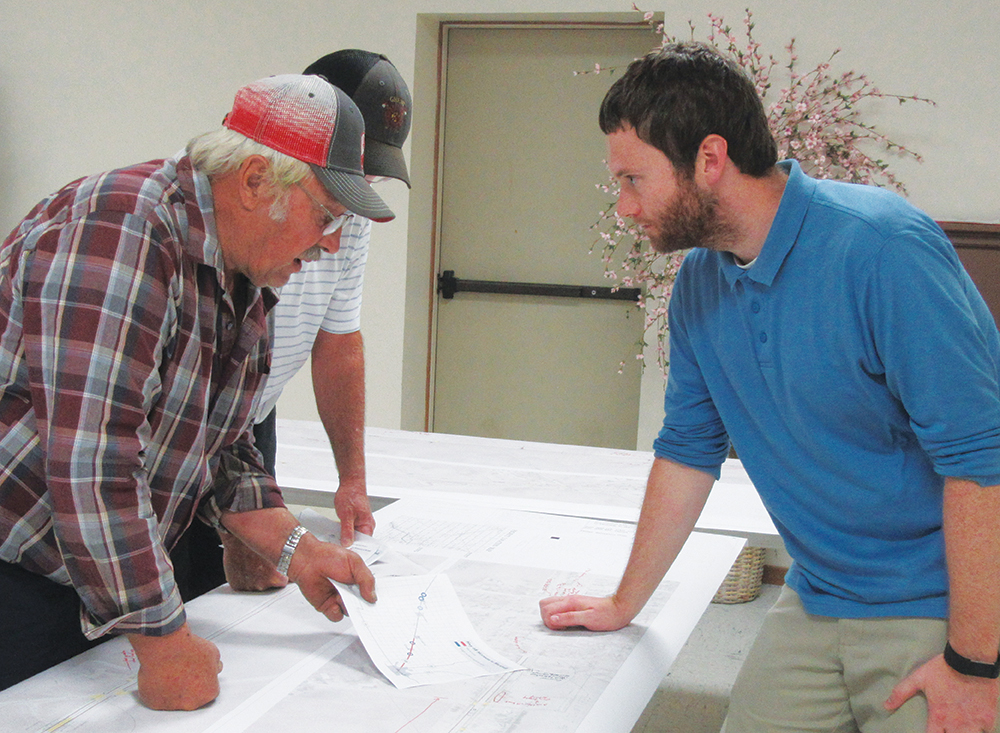 Photo by Deb Gau MnDOT project manager Chris Nienaber, at right, speaks with area residents during an open house on construction planned for Minnesota Highway 68 between Minneota and Marshall.

MINNEOTA — Area residents had a chance to learn more about planned construction affecting Highway 68 north of Marshall — although not all the details of the project are available yet.

The Minnesota Department of Transportation held an open-house style meeting Thursday at the Minneota Community Center to talk about the project. MnDOT plans to widen the shoulders of Highway 68 between Marshall and Minneota during the 2021 construction season. At the same time, MnDOT will also be replacing a total of five culverts. Two are located between Marshall and Minneota, while three are located near Porter.

The biggest questions on area residents’ minds were whether a detour would be put in place during construction, and whether the whole stretch of Highway 68 would be closed at once.

Unfortunately, those details weren’t available yet, as the project is still in the design stages, said project manager Chris Nienaber. MnDOT plans to have another informational meeting this winter on the project, he said.

Nienaber and other MnDOT representatives were able to explain the type of construction being planned. Currently, the shoulders on Highway 68 north of Marshall are four feet wide, Nienaber said. The planned construction project will expand the shoulder width to nine-and-a-half feet, with the additional width graveled. At the same time, he said, MnDOT plans to re-slope the ditches along the highway, so they aren’t so steep.

The total length of road that will be worked on is 11 miles.

Two of the culverts being replaced in construction are being made longer to go with the wider roadway, Nienaber said. The three culverts near Porter, on the other hand, are being replaced due to their age and condition. Nienaber said the plan eventually is to widen the shoulders of Highway 68 north of Minneota as well. But that construction would be years away, and the old culverts needed to be replaced.

The cost of the construction project on Highway 68 was $10.5 million.

More information on the project is available online, at www.mndot.gov/d8/projects/hwy68minneotatomarshall.