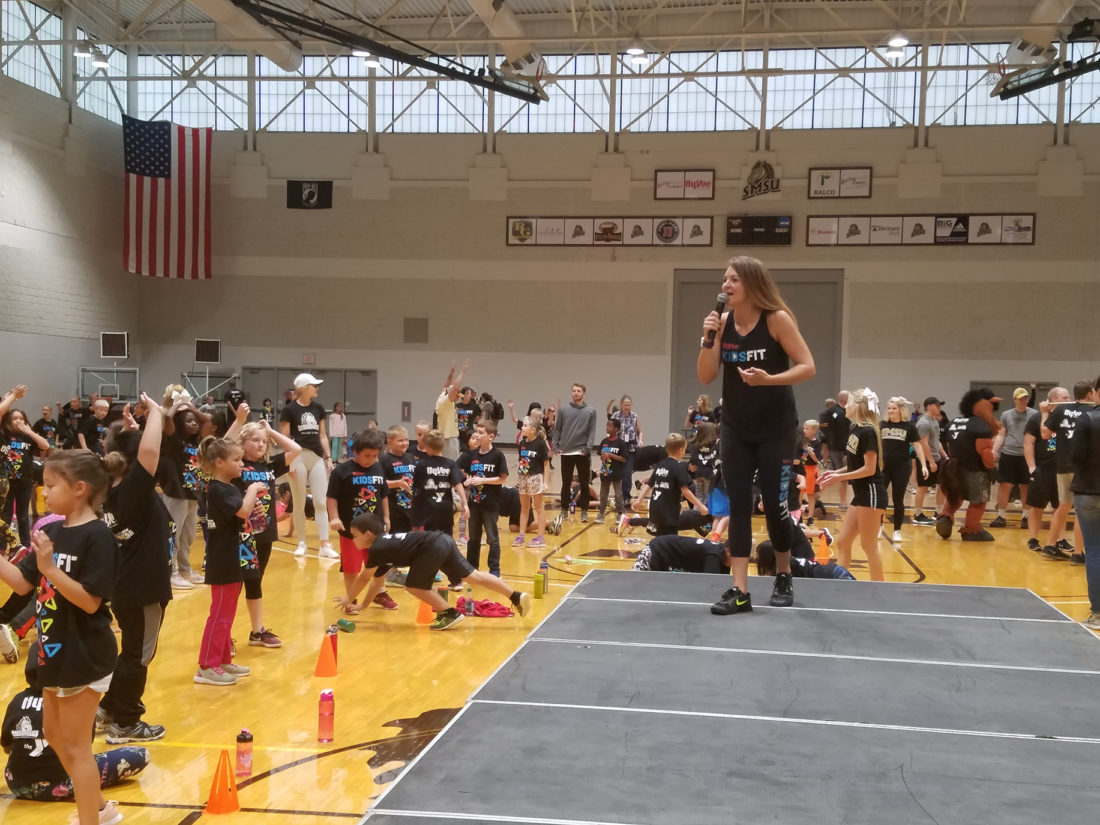 MARSHALL — “Back on your feet,” Daira Driftmier shouts.

Immediately, nearly a thousand third through sixth-grade students jump up into position. They are spread entirely around a stage set up inside the recreation/athletic facility on the Southwest Minnesota State University campus Thursday morning.

“Three frog jumps, go,” Driftmier yells to the students as she holds a mic. She paces back and forth on top of the stage.

The students bend down and then leap up.

In a matter of seconds, Driftmier shouts out “fourth grade.” The facility is full of screams from excited students. The fourth graders had just won one of the many exercise contests that Driftmier coordinated among the large group.

Getting kids excited about exercising may be a challenge for most parents or teachers. Driftmier, however, has a reputation in getting thousands of kids exercising at once with enthusiasm.

Driftmier is the Hy-Vee KidsFit certified trainer. And when she’s not training children and adults on a one-on-on situation, she travels among eight states where Hy-Vee stores are located to hold large exercise rallies for students.

“We do about 20 large events every year,” Driftmier said. She holds a bachelor’s degree in kinesiology and exercise from Central College in Iowa.

“This year we visited with 200,000 kids, we worked with over 350 schools. Our largest event is in Des Moines, Iowa, where we had 10,000 kids. It’s almost the bigger the group, the more kids realize it’s a big deal. Their attention and their awareness even becomes greater.”

Besides the traveling exercise events, Driftmier and Hy-Vee offer a “Kidsfit” website and app (hy-veekidsfit.com). According to Hy-Vee, the website is designed for families who may not be able to afford gym memberships. The website is designed to lead kids in fun exercises and get nutrition information.

“Sometimes I’m dancing around and get more pumped up,” she said. “The bigger the show — the lights and everything — the more pumped up I get.”

Driftmier’s dedication to fitness and health developed as youth. She had a heart condition and was considered overweight in fifth grade.

“I just thought I was overweight. And you get made fun of as a kid. I don’t want kids to ever feel like when they are in that position that they don’t have a choice. So that is why like today at the assembly I tried to talk about they have a choice,” she said.

Toward the end of the KidsFit event, Driftmier settled the kids down and talked about those choices.

“Life is not fair, is it?” she asks the students.

“We have a couple choices when we get into situations that are not fair. We can choose to rally and stick with it. Or you can be negative and do worse. Which do you think sounds better?”

Many of the kids yell back positive responses.

“Yea, we can get better.” she tells them.

“I never thought I would be doing something like this if you would have told me 10 years ago I would be working for Hy-Vee,” Driftmeier said after the event was over. “I would have said you are crazy. But what I have learned is that Hy-Vee is so much more than grocery stores. It actually makes me emotional thinking about all the things that Hy-Vee does for our communities.

“And it makes me proud to be working for a company that is invested in not just the customers that come through our doors, but we are reaching out. We have dieticians that do a lot of community work. We are invested in the community and go to all of the fairs, trying to show that healthy choices can be easy and really fun actually.”