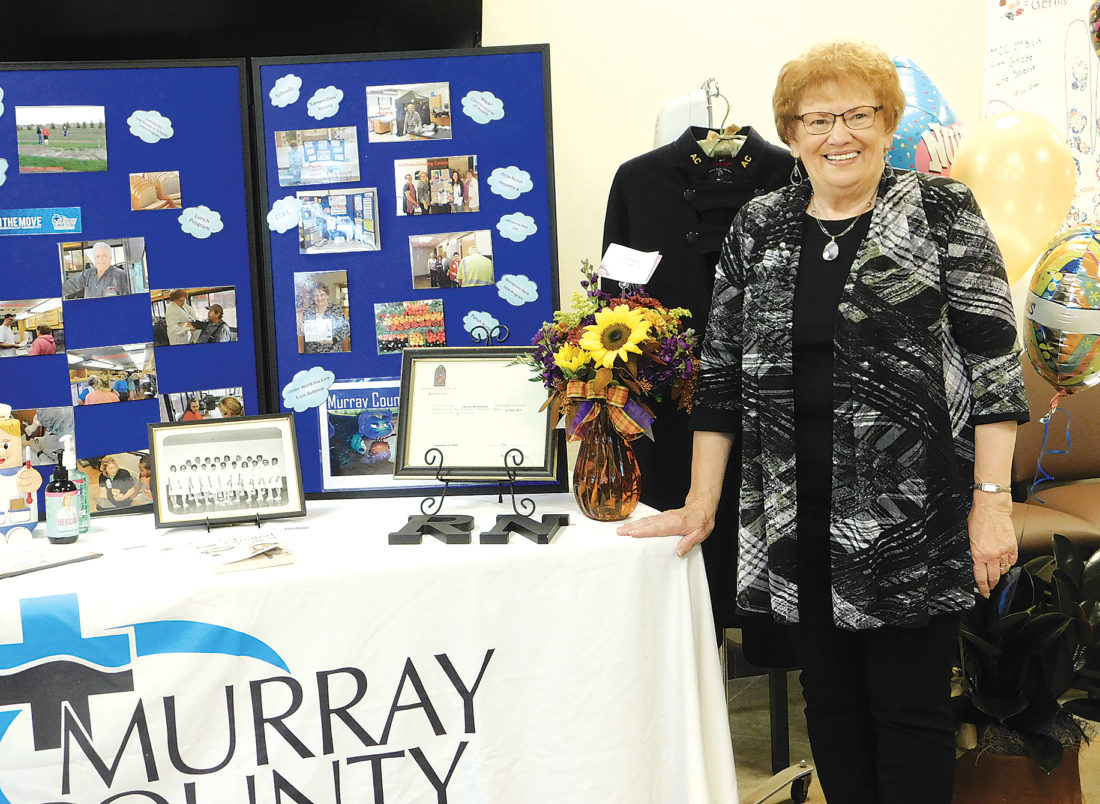 Photo by Jody Isaackson Nurse Darlene Mechtenberg of Murray County Medical Center marks 50 years of nursing this year. There was a celebration Wednesday for her work anniversary, which included a speech from the Minnesota Nurses Association president.

SLAYTON — Nurse Darlene Mechtenberg celebrated her 50th work anniversary Wednesday by greeting all her party guests at the door with smiles and hugs as well as cake and coffee.

The veteran nurse graduated Augustana College in Sioux Falls, S.D., 50 years ago and hit the ground running. For the last 30 years, she has been with Murray County Medical Center. The previous 20 years were at “other places,” she said.

Minnesota Nurses Association President Mary Turner was on hand for the party. Turner gave a short speech and presented Mechtenberg with an elaborate plaque commemorating the longevity of Mechtenberg’s career.

“I may be slowing down, but I’m not quitting,” Mechtenberg said, then cracked a joke about all the RNs that showed up for her party, calling them “Retired Nurses.” “My mother used to say, ‘You don’t retire, you just re-fire.'”

Many of the guests were currently employed nurses at the Murray County Medical Center, but there were also many friends there, like Mechtenberg’s best friend, Linda Namur from Alexandria.

Mechtenberg had brought several mementos for a display, including a wall poster with a hand printed on it along with a thank-you note and the signatures of several elementary students who had enjoyed her presentation on hand washing.

In addition to classroom visits, Mechtenberg had taken a hand-washing booth along to kids’ camps and other public events where she held demonstrations.

“We would put fake germs on their hands and they would see them, then they’d come in and wash off the germs before going out to play again,” she said.

“I’m so grateful to the Murray County Medical Center for letting me do that,” Mechtenberg added.

Mechtenberg regaled the audience with tales of her nurse’s training days when the uniforms were chalk white, including the nurse’s shoes and starched hats. Quite different from the colorful scrubs and Skecher tennis shoes they wear now, she said.

She also mentioned the differences in cost of medical services. For example, having a baby with a 10-day stay and nursery back when she started nursing was only about $120. Now, it’s over $10,000.

Mechtenberg also talked about the scholarships the MNA Foundation awards, one of which she was a recipient.

“I was a single mom when I was in nursing school,” she said. “I was able to provide for my two boys while going to nursing school because of a Legacy Scholarship. It was the thread that kept me on track.”

Mechtenberg announced that this year, the MNAF gave out $170,000 to 77 applicants.

“I read every one of those applications and their essays,” she said. “I’ve been really fortunate to be on that board.”

“It’s not just a celebration for me, but for the whole hospital,” Mechtenberg said. Then she modeled her graduation cape at the close of the program.