Minneota hometown hero considers himself one of the lucky ones 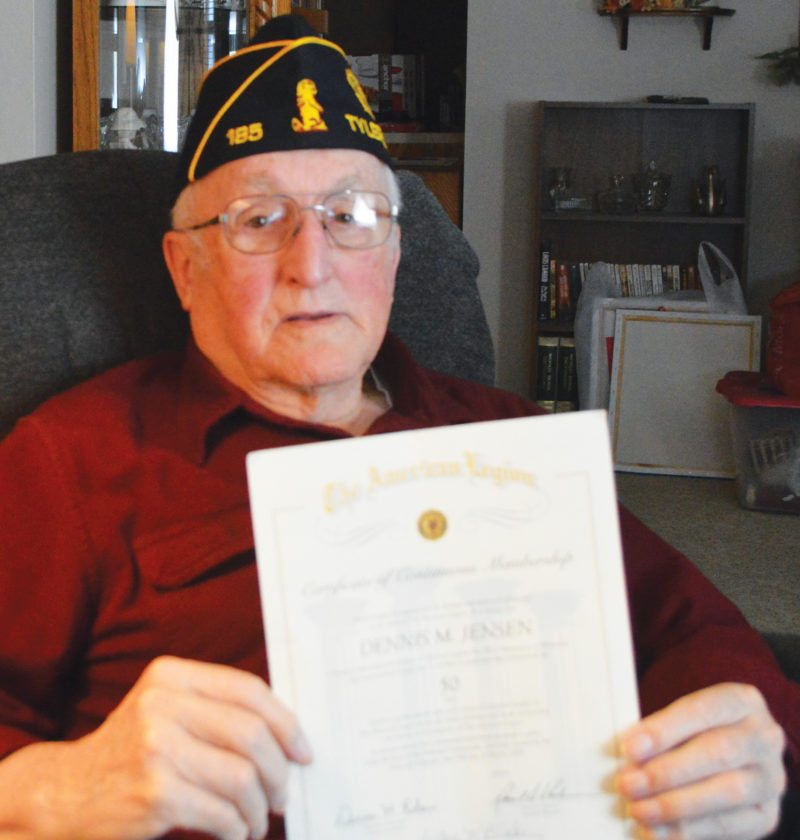 TYLER — Korean War Veteran Dennis Jensen was one of the lucky ones. Not only did he return from service in Korea, but he had won a coin flip to stay in camp on the day that one of his buddies step on a roadside bomb on the excursion.

“We flipped a nickel and I won,” Jensen said. “He had to go. He got schrapnel all up and down his leg.”

It could have been worse. Many war victims got home in body bags, if at all. But Jensen said this buddy considered himself the lucky one.

“He kept laughing,” Jensen said. “When asked why, he said he got to go to Hawaii to take care of his leg. He was a Johnson from Minnesota, but I don’t remember his first name.”

After his two years in the Army, Jensen said one of his many jobs was as a truck driver. He had a load to the Minnesota town where this buddy lived, so he stopped for a brief visit.

“He limps a little, but otherwise was getting along pretty well,” he said.

Jensen was in the Army for two years, from 1952-53, serving as the company clerk for most of the time. He duties included developing work details/groups and filling out and filing multiple forms. When he was drafted, they shipped out of Seattle on a big ship that took 10-11 days to get to Korea. Jensen said he did not get seasick but several soldiers did.

“When I visited Japan, at that time it was really poor,” Jensen said. He had gone there for chemical training (long before Agent Orange came out).

He didn’t mind talking about his unit moving up and down from the east side to the west side of Korea when he was there. Every time they got close to the front lines, there was a nice trade-off for being that close to the shelling.

“It was a cold place,” Jensen said. “Almost like Minnesota. We lived in tents and slept in sleeping bags. Near the 38th Parallel, the buildings were well-built and held in the heat. It was nice.”

Back then, a soldier never new how much mail they would get or when it would arrive. Often it was very little and far between, he said.

On the homefront, after Jensen joined the Tyler Legion, he has participated in uncounted number of parades, gun salutes for funerals and serving at the Legion bar during town celebrations and wedding receptions.

One Feb. 22, Jensen was recognized as a 50-year member of the Tyler American Legion Post 185. He received a certificate commemorating the occasion. “It would have been longer, but I didn’t sign up for membership right away when I got back to Tyler,” he said.

Having graduated from Tyler High School just prior to going into the service, Jensen did not have an opportunity to go to college, but did not have any trouble finding jobs after he left the Army.

In the years in between, Jensen took on a bookkeeping job with Lincoln County Co-op Company, which is a story in itself.

“They’re not in business anymore,” Jensen said. “I worked for them for about 30 years total.”

Jensen spun a story about how the company management came up with the idea he knew wouldn’t work, so he left the company for some time. “I was office manager to start with, then I got to be manager,” he said. “Then they decided on some expansion that I knew wouldn’t work, so I quit. Then, they went broke, and then they hired me back as manager. I worked from 1986 until I retired. I retired in 1996.”

During the years he didn’t work for the co-op, he still worked for area co-ops as a trouble-shooter.

“I worked everywhere, working at a lot of different jobs in between,” he said. “Hendricks’ went broke, too, so I went up there and got their books together and got it ready for sale.”

Jensen basically did the same thing for another area town’s cooperative.

“They were in the same problem, going broke,” Jensen said. “I went over there as assistant manager and got things together before they sold it.”

“I did really well in high school. I didn’t have any problem with math,” he said.

Jensen had stayed home with his parents from the time he returned to the States and lived with them until he was 30 years old, helping them, until he met his wife Esther, and got married. They started a family of their own.