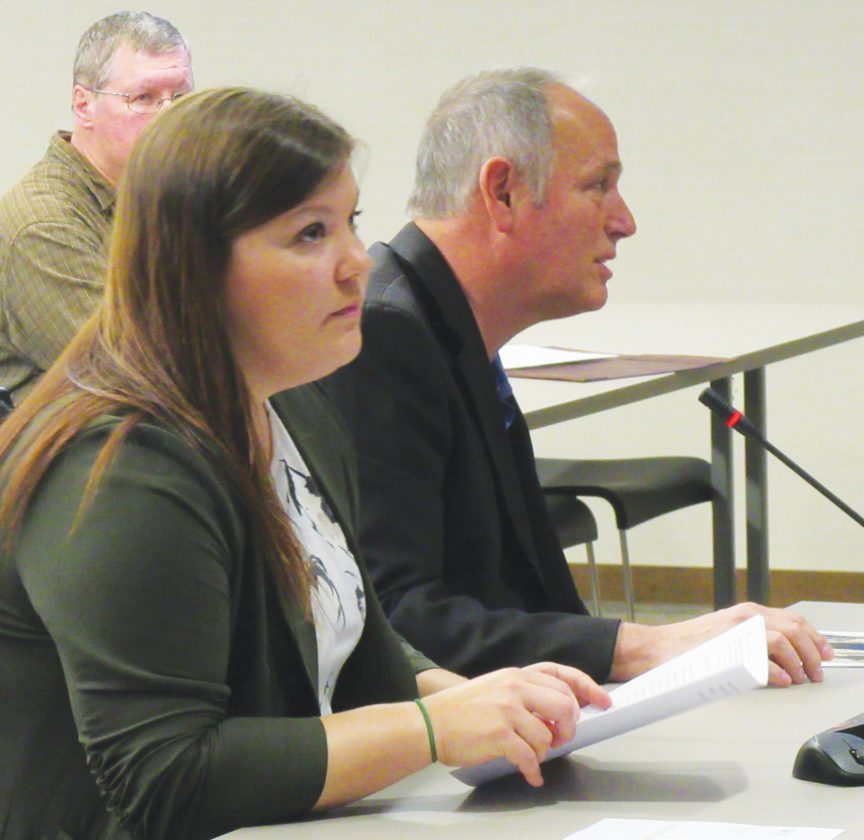 Photo by Deb Gau Tara Onken and Cal Brink addressed members of the Lyon County Board during a public comment period Tuesday.

MARSHALL — The turnout was small. But at a public comment session held Tuesday morning, Lyon County commissioners did get some of the feedback they were hoping for on proposed interchanges on Minnesota Highway 23.

Commissioners heard from representatives of Marshall schools, Southwest Minnesota State University and the Marshall Area Chamber of Commerce, as well as written comments from Lyon County residents. All supported the proposed interchanges.

“A letter of support from you would be huge,” said Marshall School Board member Bill Swope, addressing commissioners.

While county commissioners did pass a resolution of support for the projects, Commissioner Charlie Sanow had some criticism for the way the interchange proposals were brought forward by the Minnesota Department of Transportation. He compared it to the 2015 construction of a reduced-conflict intersection at Highway 23 and Saratoga Street. Sanow said there were negative feelings about the 23/Saratoga project because it didn’t gather public feedback first.

At Tuesday’s comment period, Sanow said he wasn’t opposed to applying for Corridors of Commerce funding. He was opposed to supporting the application without getting public feedback.

“I just want to make sure the public has a chance to say something,” Sanow said.

At the county board’s March 20 meeting, Sanow had compared the way the interchange proposals were being made to the construction of the 2015 reduced-conflict intersection project at Highway 23 and Saratoga Street.

Brink said he “took to heart” some of Sanow’s comments from the March 20 meeting, and asked MnDOT representatives about what would happen next if the proposals are funded. If the projects are funded, there would be several meetings with the public before plans are finalized, he said.

During a safety study conducted on Highway 23 in Marshall, several public meetings were held to gather public feedback, and the idea of building interchanges got positive feedback, Brink said.

Even with the Corridors of Commerce funding application, the proposed interchanges are not a sure thing yet.

“We may not even get funding,” Brink said. “But it looks favorable.”

“I really hope they’re looking at different options” for the interchanges, said Commissioner Rick Anderson. Some of the concept drawings commissioners had seen for the proposals showed the interchanges going through areas that had already been developed — like the drainage ponds, university sign and Southwest Minnesota State University mustang sculpture at the intersection of Highway 23 and Highway 19.

If the interchanges are built, Anderson said, he thought Highway 23 should be the road that is built into overpasses.

Bill Mulso, vice president of advancement at SMSU, and Swope both spoke in favor of the interchange proposals.

“We probably stand to see some of the biggest changes,” Mulso said, but the project would still be positive. An interchange at the intersection of Highway 23 and Highway 19 would be safer for both SMSU students and Marshall High School students.

“The safety of our students is most important,” Mulso said.

Swope was injured in a crash at the Highway 23/19 intersection in 2014, when his vehicle was hit by a semi truck. However, he said, he was also concerned about student safety.

“The bottom line, really, is our kids,” Swope said. The proposed interchanges could help prevent more serious crashes in the future.

In his letter, Knochenmus said safety at intersections with Highway 23 in Marshall is an ongoing problem. Safety on the Highway 23 corridor is also an issue that has directly affected Ralco and the people who work for the company, he said. In 2015, Greg Heintzeman, a Marshall resident and a Ralco employee, was killed in a crash at the intersection of Highway 23 and Saratoga Street.

“While I do believe the J-turns have made it a safer route, the congestion and safety at the intersections of (County Road) 7, (Highway) 59 and (Highway)19 has certainly remained a problem,” Knochenmus said. “The potential of having overpasses at any or all of these intersections would drastically improve safety and efficiency.”

Although they had already approved a resolution supporting the Corridors of Commerce application, county commissioners said they appreciated getting public input on the proposed interchanges.

“I’m glad we had this meeting before sending a letter (of support),” Sanow said.