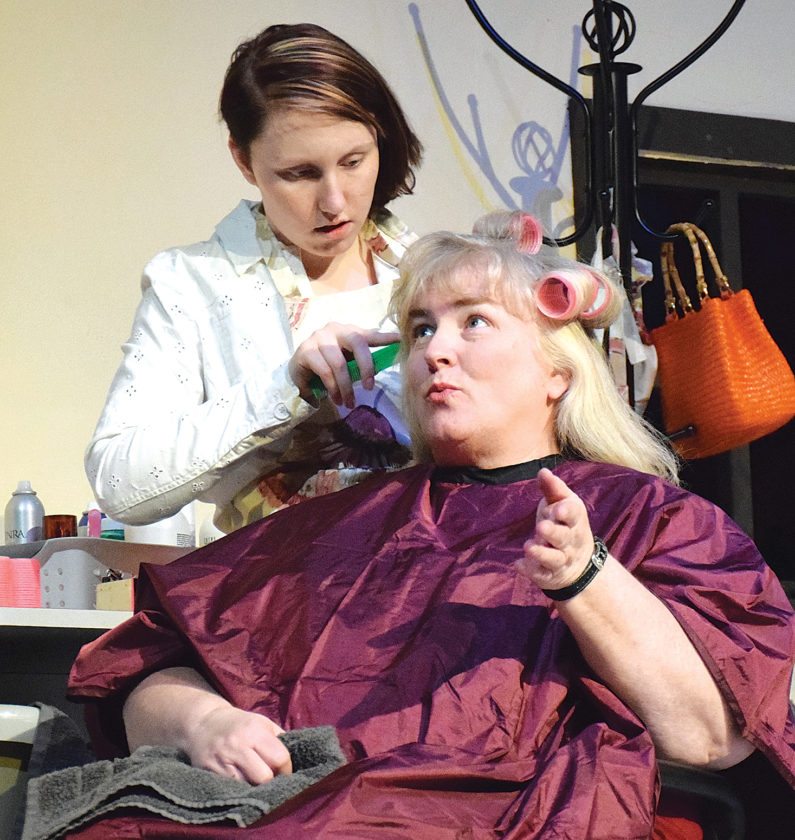 LAKE BENTON — In preparing for her role as Shelby in the play “Steel Magnolias,” Lacey Barke said she learned a little from watching Julia Roberts play the character in the movie.

“Steel Magnolias” will be performed at 7:30 p.m. today-Saturday, and April 13-14, and 2 p.m. Sunday and April 15, at the Lake Benton Opera House. The show is being directed by Alan Riedel.

In “Steel Magnolias,” the show is set in Truvy’s beauty salon in Chinquapin, Louisiana. Among her customers are Clairee, Ouiser, M’Lynn and her daughter, Shelby. Truvy also has a new assistant, Annelle. According to the play’s synopsis, Truvy’s is “where all the ladies who are ‘anybody’ come to have their hair done.”

Barke said her character Shelby is a diabetic and has had some complications in her life because of it. Kathy Holck portrays M’Lynn in the show. M’Lynn, one of the southern ladies of Chinquapin Parish, is Shelby’s mother.

“Shelby has a unique and sometimes strained relationship with her mother, but in the end they do really love each other,” Barke said. “Shelby is independent, strong-willed and kind-hearted, which makes her a fun and memorable character to play.”

“She’s a typical mom, critical of her daughter’s choices, always thinking that she knows what is best, is overprotective of her family and trying to keep her head above water,” Holck said of her character.

“I love being this type of character,” Wilmes said.

To get ready for the show, Wilmes said she read through the script several times and watched the movie version again as a reminder. She had remembered watching the movie years ago.

“I wanted to see the characters and the difference between the movie and the stage version of the show,” she said.

Holck had only seen the she once or twice many years ago, so she wasn’t sure what part might be right for her when she auditioned.

“I’m not exactly Julia Roberts, but I learned quite a bit from the way she portrayed Shelby,” Barke said. “It was difficult to try and be a kind person while also keeping that spunk that makes Shelby Shelby, and watching the movie helped with that little bit.”

Barke watched the movie again before auditioning for the play, and the movie was a roller coaster of emotions that ended in her crying.

“That’s how you know it’s a good movie,” she said. “I knew that I had to audition for it then.”

“The best thing about the story is how the friendship that these women have developed during their weekly visits to the beauty shop strengthens their ability to get through both good and bad times,” Holck said.

One of the most emotional points comes near the end of the show during M’Lynn’s portrayal of what happened at the hospital, Holck said. Wilmes said one of her favorite parts of the show is how all the women support each other, in good times and in bad.

“They can laugh too,” Wilmes said. “That’s what friends are for, after all.”

Each character develops throughout the play, Barke said, and has their own emotional growth, which is fun to watch, especially Miss Ouiser.

Each show is so much fun, Wilmes said, meeting new people, getting to know new friends, hanging out with friends from past productions and struggling together to make this production successful.

“The characters in the show are all very relatable to people you meet in everyday life,” Holck said. “I’ve worked with all these ladies in other shows, and they are all great actors. It’s so much fun to see the outcome of all the hard work that goes into the production.”