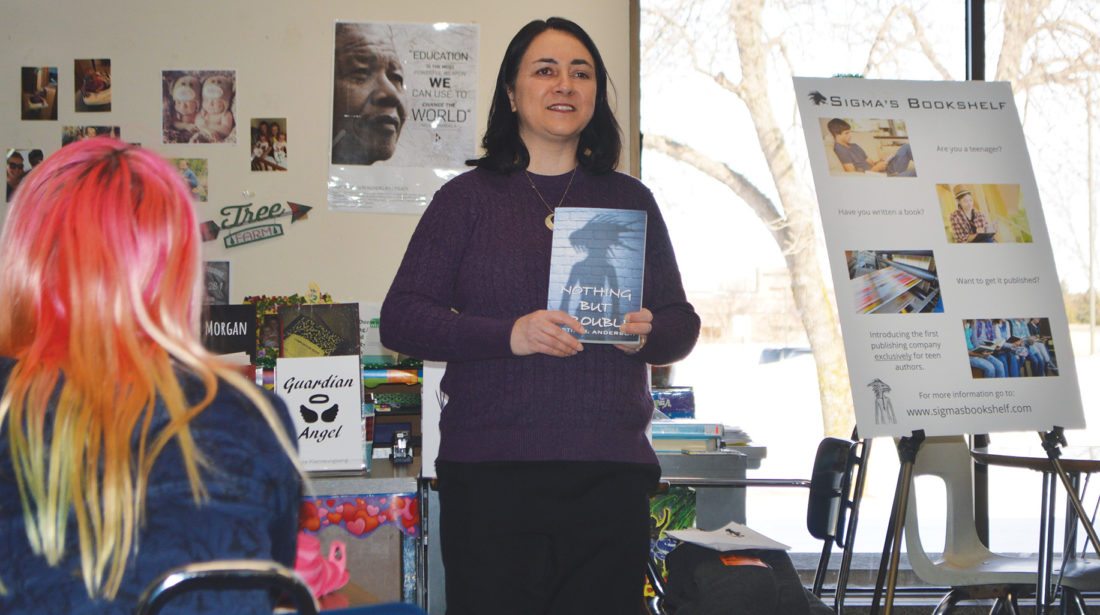 Photo by Jody Isaackson Children’s book publisher/editor Rachel M. Anderson visited Marshall Middle School and talked to eighth-grade students about self-publishing their own books. Anderson described her teenage son’s process and how he helped her decide to publish other student’s books with Sigma’s Bookshelf.

MARSHALL — Using her experience in the field of publicity, Rachel Anderson of Minnetonka helped her teenage son get his books published. In the process, Anderson co-founded a publishing company for kids to get their books published for next to no cost.

Through her presentation called “Empowering Teen Writers to Become Published Authors,” to Marshall Middle School students Friday, she talked about the different types of books on the market, the reasons writers write and shared the story behind how Sigma’s Bookshelf came about. The presentation also educated students on the types of publishing available and how to submit a book to Sigma’s Bookshelf for consideration.

“I do all the editing for free,” Anderson told an eighth-grade English class.

She said that when she was young, she wrote a story about her mom and her mom’s twin sister, but it got stuffed into a drawer and forgotten until Anderson was an adult. She didn’t want that happening to other good children’s stories.

With the advent of computers, the Internet and Internet marketing, the students who publish with her receive a 60 percent commission on all their books published through her.

Anderson talked about her son, Justin M. Anderson’s first book, “Saving Stripes, A Kitty’s Story,” in which he tells the true story of the cat family he helped rescues from the point of view of the orange tabby he ended up adopting.

“To date, more than 300 copies of the book have sold with 100 percent of the profits benefiting S.O.S. Rescue relief of Plymouth,” Anderson said. The nonprofit, whose mission is to prevent euthanasia in adoptable animals, helped with the rescue, she said.

Justin Anderson came up with the idea for Sigma’s Bookshelf after being overwhelmed by all the attention he was getting her son’s first book. He wanted to help other teens enjoy their own publishing success, his mother said.

The company has now published seven books written by teenagers, including Justin’s second book, the novel, “Nothing But Trouble,” which tells the story of a teenager who transforms into a lizard-like humanoid creature after having been a test subject in a cancer-cure project gone terribly wrong.

“It took him about a year to get (‘Nothing But Trouble’) finished,” she said, “because he went through a couple of rewrites before he got the version he wanted to publish.”

“Editing is very important,” she said. “Just because you write it one way, doesn’t mean it will end up that way.”

There were about a half dozen other books on which she spoke as well. Each book was written by a child or teen and had met the criteria she sets before them in that they are book length, not just story length. They had a beginning, a middle and an end.

“You have to have an ending,” Anderson said. “It can’t be a cliffhanger like on some television shows. Each book has to be a complete story and tell a good tale.”

She read a couple of the shorter ones to give examples. One of which, as submitted, hadn’t had good closure, so she sent it back to the author asking questions about what happened to the protagonists in the story. The young author sent back an epilogue that answered the questions and completed the book to Anderson’s satisfaction.

If Anderson ever rejects a book submission, she said she always writes and sends her reasons why so to that the authors can improve their work.

Further inquiries regarding publishing books written by students can be made at www.SigmasBookshelf.com.

Sigma’s Bookshelf is a sponsored project of Springboard for the Arts, a nonprofit arts service organization. Contributions on behalf of Signa’s Bookshelf are tax deductible and can be made online at www.SigmaBookShelf.com/Donate.