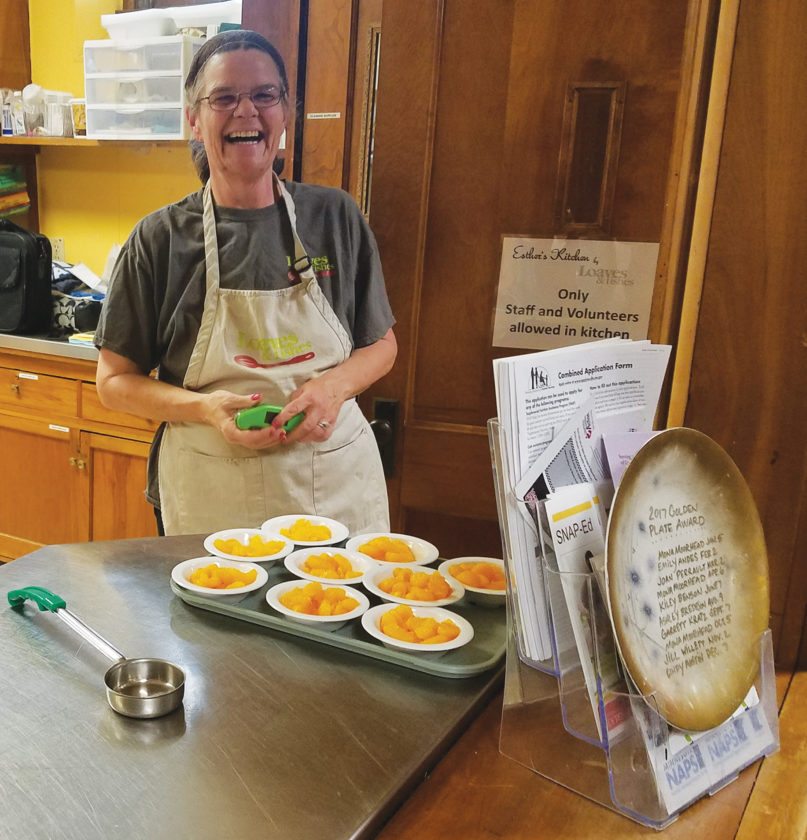 Photo by Mike Lamb Esther’s Kitchen site coordinator Cindy Austin gets ready to serve meals Tuesday to guests inside the Christ United Presbyterian basement with the “coveted” Loaves & Fishes Golden Plate on display in front of her.

MARSHALL — Cindy Austin knows how to put an appetizing plate a food together.

And the board of directors for a Minnesota free-food program called Loaves & Fishes agreed. In December, the board awarded the site coordinator for Esther’s Kitchen in Marshall the Golden Plate.

“I wasn’t quite sure what it (the award) was for. Which plate it was,” Austin said Tuesday, as she dished out food to guests in the kitchen located in the Christ United Presbyterian Church basement.

Austin found out which plate of food was the winner when Loaves & Fishes Executive Director Cathy Maes showed up at the kitchen before meal time.

Maes explained all the site coordinators in the 26 Loaves & Fishes locations submit photos of their top food dishes each month. Then the board judges them and picks the winner.

“It’s based on color, healthiness of the meal,” Maes said. “We know if a plate looks good, people will come back. We look at ourselves as the largest free restaurant in Minnesota. So you don’t come back unless the food looks good. So the food has to be good and the board of directors thought that meal she made at that given time was amazing.”

Austin said her secret to making an appetizing plate of food is simple.

“I’m pretty much putting all of the me into it,” she said. “I feed my family exactly the same things I make here. Between the fruits and the vegetables and everything this is what I made at home. Plus I worked at different restaurants.”

Austin said she serves about 35 to 45 meals daily, Monday through Thursday in Marshall.

She said the number of people who show up for the free meals often depends on the weather. But she is hoping to expand those meals to 60 or 70 during the summer.

“We are real excited about her,” Maes said of Austin. “This is her first time winning. It’s kind of coveted.”

Maes also said it’s also the first time the plate has been awarded in Marshall. The plate lists all the award winners for the year.

“A lot of people ask why are we in Marshall?” she said. “People are hungry and we need to be here to help those in need. I tell people that needs in rural Minnesota looks a lot similar to the needs up in Minneapolis and St. Paul. We are happy to be here.”

According to its website, Loaves & Fishes meal program started in 1982. The program now serves 2,000 meals daily throughout the state.