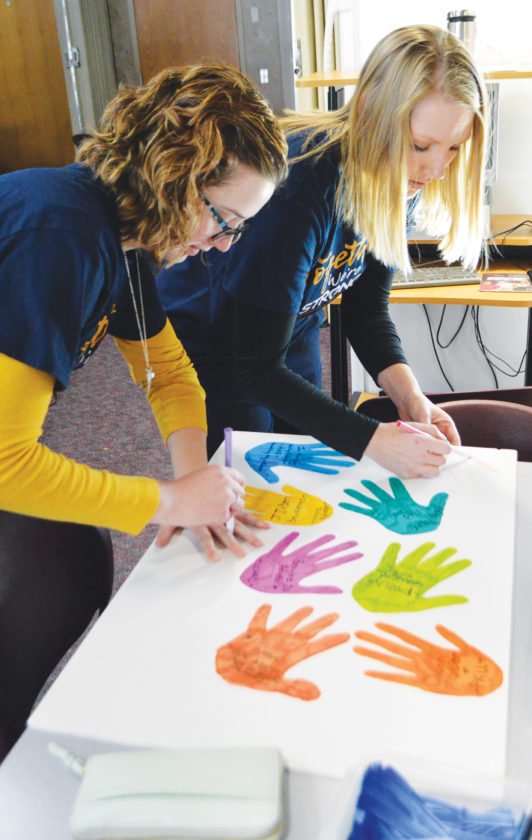 Photo by Jenny Kirk Peyton DeSmet, left, and Brittany Pridal trace their hands and begin coloring them in as part of a special activity to honor people with rare diseases. A two-hour event was held on Tuesday at Sanford Canby Medical Center as part of an awareness and fundraising campaign for today’s Rare Disease Day being recognized in Minnesota.

CANBY — Braylee Pridal had an enormous impact on the people around her throughout the five years of her life. Her smile could brighten a room — you could say that her smile was unforgettable, as is Braylee, who died on Nov. 13 from complications of a rare genetic disorder called LCHAD.

On Tuesday, supporters came together to honor her life — as well as others who are affected by rare diseases — at the Sanford Canby Medical Center.

“Braylee was a such a little trooper,” said her mother, Brittany Pridal. “She was very brave and just so positive about everything. She’s the only 5-year-old I’ve ever seen who would sit there and sing the ABC’s when you would start an IV. She knew it would hurt for a little bit, but then would say she knew it was going to get better because she was going to get her medicine.”

In kindergarten, Braylee had issues with vomiting, one of several unpleasant conditions associated with LCHAD.

“She would literally go from doing her lesson in school to getting up and going to the bathroom, vomit and then come right back to finish her school work again,” Pridal said. “She was so resilient.”

LCHAD stands for long-chain 3-hydroxyacyl-CoA dehydrogenase, which is a rare condition in which people with LCHAD have problems breaking down fat into energy for the body.

“In her DNA, she’s missing the enzyme that would break down fat to energy,” Pridal said. “Our DNR is not altered like hers is, so we can break that down. When you’re sick or your body needs energy, first it will go after glucose or carbs because that’s your immediate source. But once your body has used that, then it will start burning fat and turn it into an energy.”

Unfortunately, Braylee’s body couldn’t do that.

“As soon as her immediate glucose store was gone, her body would try to find energy and it would eat her muscles,” Pridal said. “She would get really tired and weak, to the point where she couldn’t even bear weight on her legs. She’d fall. And it’s very painful. Her body was essentially eating her body to stay alive.”

Like the large majority of other rare diseases, there is no cure for LCHAD. Early detection is a major key, however.

“There’s supplements and all these things that aren’t FDA-approved that you can do, but there’s not a ton of research on it,” Pridal said. “The oldest person I know of (with LCHAD) is 23.”

Pridal said she believes the rare metabolic disorder was first identified in the late 1980s by a Swedish doctor.

“In terms of medical, that’s not very old,” she said. “Thirty years is not a long time, so there’s tons of knowledge that needs to come out of it yet.”

The lack of awareness, research and funding are some of the reasons why Pridal, her husband, Jarrett, and their family and friends have been such strong advocates for rare diseases. According to GlobalGenes.org, 30 million people in the United States and 350 million people globally are affected by rare diseases.

“There are 7,000 rare conditions and only 400 of them have treatments,” Brittany Pridal said. “Approximately 80 percent are caused by faulty genes. They also say that half of the people affected are children and 30 percent of them don’t live till their fifth birthday.”

Karol Haas said her granddaughter made an incredible impact both before and after she got her angel wings.

“It’s amazing what that little girl has done for the community,” Haas said. “And watching a community come together and recognize rare diseases, along with comforting and supporting each other, has been overwhelming and touching.”

Brittany and Jarrett Pridal are Canby natives and Braylee was a kindergartner at Canby Elementary School, so it makes sense that their hometown would rally to support them.

“People have really pulled together for this family,” said Brenda Knutson, director of nursing at Sanford Canby Medical Center. “The reason we wanted to do this (Tuesday) was just to support Brittany and her family through the journey they’ve been on with Braylee. Brittany’s drive and push for awareness, even after Braylee is gone, is admirable to many, so we wanted to show our support.”

Pridal has been employed as a nurse at the medical facility for seven years — even longer if you count the time she spent working while attending nursing school.

“I knew our employees would come and be supportive because we have a strong family value here,” Knutson said. “We want to support each other no matter what they’re going through. I was especially impressed to see people from the community come in.”

Knutson said the staff came up with the idea of a meal fundraiser.

“We’re going to donate all of the proceeds to rare disease research,” she said.

Pridal coordinated special activities, including the opportunity to trace one’s hand on a poster board as a way to celebrate the life of someone who is affected by rare diseases. People in attendance could also wear pins in recognition of rare diseases and be educated about the impact they have on people by reading about the facts.

“The number of people that Braylee’s life has touched, whether it was knowing them, seeing them or just though Brittany’s quest to get her story out there to get more people educated, it’s amazing,” Knutson said.

Pridal admits that she didn’t know nearly as much about rare diseases until after Braylee was born. Since she had severe endometriosis, Pridal said doctors suggested she and her husband start their family as early as possible or risk potentially not being able to have them. After getting married, they conceived quickly. While the pregnancy and delivery “went perfectly,” Pridal said everything changed when Braylee was 3 days old.

“A nurse went to go check her temperature and it was quite low,” Pridal said. “And at 3 days old, newborns should be able to regulate their body temperature better than what she was. So that kind of signaled them to do more testing.”

“The next day, we found out that it had flagged high for LCHAD,” she said. “That was just a screening and not a definite diagnostic, so we had to do DNA sequencing of her blood to find the true mutation and the exact diagnosis.”

Like most couples, the Pridals hadn’t given a thought to doing genetic testing prior to starting a family.

“There’s more and more advancements, obviously, on genetics as technology has grown, but there’s huge barriers,” Brittany Pridal said. “Insurance does not cover it, so it’s very costly.”

The first year of Braylee’s life included many hospital stays, but then her needs leveled out quite a bit. Then, it wasn’t until May of 2017 that Braylee started having critical issues.

“Early detection, they say, is good, and Braylee did very well,” Pridal said. “She was in the hospital many times in the first year of her life, but that’s pretty typical because they’re young and more fragile. But overall, she was managed very well. Things were going great — up until May. Then things just changed.”

Pridal said doctors couldn’t figure out what was going on.

“So we don’t know exactly what happened,” she said. “Unfortunately, Braylee ended up passing away. What kind of led up to her complications is she had cardiomyopathy, which is heart failure that occurred because her body could not efficiently pump fluid or blood through her body, so then her lungs filled up.”

Through an online support group, Pridal has since learned that three other children with the same condition as her daughter are facing similar complications.

“The three of them have recognized cardiac issues now and have had defibrillators placed,” Pridal said. “I’ve even reached out to the Melanie Gillingham, the researcher at Oregon Science and Health, who has done some research on LCHAD and she’s starting to notice some significant things with cardiac issues and LCHAD.”

Pridal added that she believes it is a positive thing that more light is now being shown on that specific complication, which hopefully leads to fewer losses of life in the future.

“It’s possible that one of the reasons people aren’t well aware of rare diseases is because (those affected) are passing away when they’re young,” she said. “Years ago, you didn’t hear of LCHAD. Even in nursing school, you didn’t hear about it. Braylee’s doctor in Sioux Falls (South Dakota) specializes in genetics and she has only seen it once and that was when we was on residency on the east coast. It’s that rare.”

The Pridals also have a 17-month-old daughter named Briella, who they conceived using in vitro fertilization.

“We had to use a donor egg and IVF, so she doesn’t have my DNA,” Brittany Pridal said. “She was fertilized with my husband’s sperm, so she could have DNA from him, but she won’t have it from me.”

Pridal said she is optimistic about having more children in the future.

“We hope to,” she said. “When we got our donor eggs — you buy them in lots, actually which sounds kind of funny — there were 10 of them and then they fertilize them. Four of them survived after fertilization — they grow them out to a Day 5 embryo and then they freeze them. So when we transferred for Briella, we only transferred one and it took. So we still have three frozen that we could use for future use.”

While becoming quite knowledgeable about LCHAD, Pridal said she plan to remain an advocate for all rare diseases.

“We’ve learned a lot over the years,” she said. “Looking at Braylee, you wouldn’t have had any idea that she had anything. It’s kind of like a silent, non-visible disorder, but yet it affected her internally in a huge way. I know there are so many other people who are affected by rare diseases, and I can just imagine how lonely and scared they feel if there aren’t people out there who can help them or support them, so my biggest goal is to advocate and not just specifically for LCHAD.”

Thanks to Gov. Mark Dayton, today is a day to recognize both the progress and the challenges associated with rare diseases. Dayton proclaimed Feb. 28 as Rare Disease Day.

“I’ve written two other times, because when you write for a proclamation, it’s only good for that year,” Pridal said. “So I did it this year again and he approved that February 28 is officially Rare Disease Day in Minnesota.”

While grateful that the effort helps draw attention to rare diseases, Pridal said there is still a long road ahead.

“I like that (Dayton) did this, but now it would be nice to see how much further we can get,” she said. “When you say Rare Disease Day, what does that really mean to everybody else? That’s the next step.”