They’re not on the ball — they’re in the ball 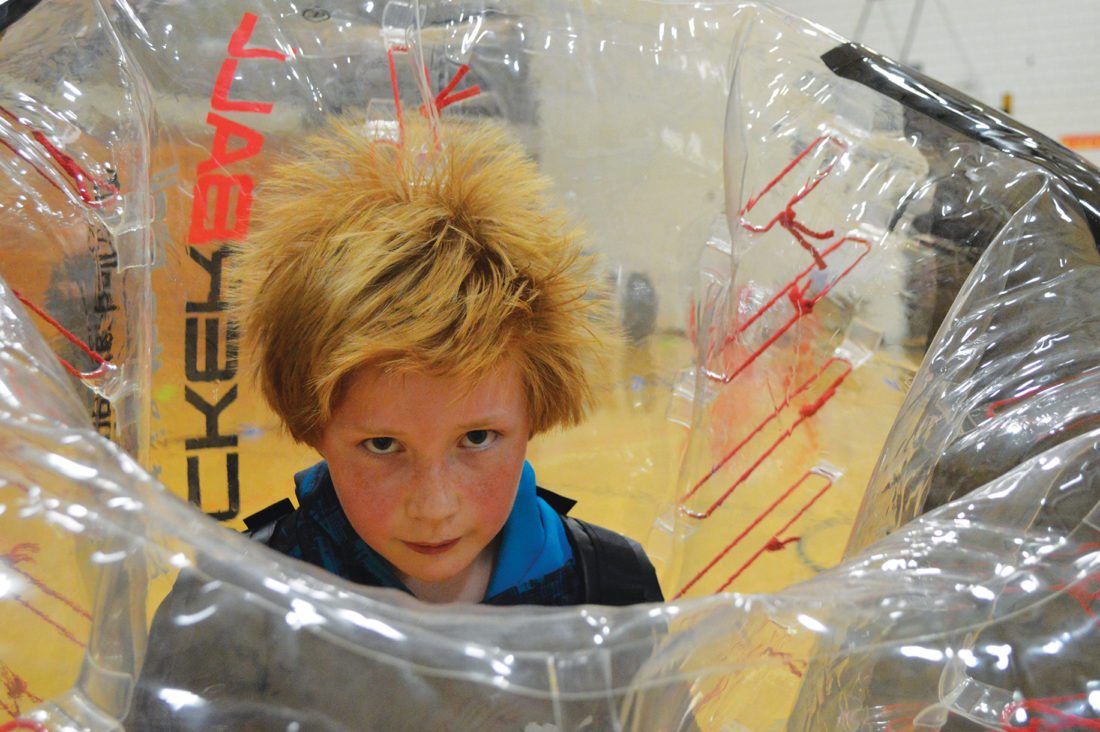 Photo by Deb Gau Doing somersaults inside an inflatable Knockerball made enough static to make Caleb Steilen’s hair stand on end. Steilen was one of the area kids who tried Knockerball during an open event at the Marshall Middle School on Sunday.

MARSHALL — The aim of the game was simple enough: kick the soccer ball across the gym and into the opposing team’s goal. But when Jazlyn Lenort blew the starting whistle, young players Madyson Hasert, Makayla Hasert and Keynan Coequyt found themselves bumped backward before they could even get to the ball.

All three kids were inside Knockerballs, round inflatable contraptions that looked a little like giant beach balls. Wearing the Knockerballs made it possible to bounce off of other players, or even roll around or do flips.

With a little running momentum, Caleb and Chloe Steilen were somersaulting from one end of the Marshall Middle School gymnasium to the other.

“It was harder to do the back flip,” Caleb Steilen said.

Local residents had a chance to try Knockerball during an open event at the Marshall Middle School on Sunday. More events are being held on November 19 and November 26.

“We want to get people out there to learn what Knockerball is all about,” Kerry Lenort said. The Lenort family have gotten into the Knockerball business in the Marshall area.

“There are a few affiliates in the area. There’s one in Willmar, one in Sioux Falls, and one in Mankato,” Lenort said. Knockerball seemed like it would be a good fit here, too, he said. “It’s bringing some fun to Marshall.”

Lenort said he first learned about Knockerball through social media.

“I think it was typical Facebook stuff,” Lenort said. After seeing the inflatable spheres in action, he said, “I thought, ‘This seems like fun.'”

It was also something the family could do together, Lenort said. As Knockerball Marshall employees, they set up for events, lead games and provide safety supervision.

There are a few different games that Knockerball can be adapted to, and that can be played indoors or outdoors, Lenort said.

“The most fun game is just playing soccer,” he said. “Knocker soccer” is played like normal soccer, but with the players all strapped into the inflatable balls. Trying to take possession of the soccer ball means getting close enough to bounce off of other players.

“We have a version of musical chairs, but instead of chairs, we use hula hoops,” Lenort said. There’s also a Knockerball version of sumo wrestling, where players compete to be the last person standing inside a circle on the ground.

“It’s a lot of fun. It’s something where you can have a lot of people at once,” Lenort said of Knockerball. The Lenorts said they hope to spread the