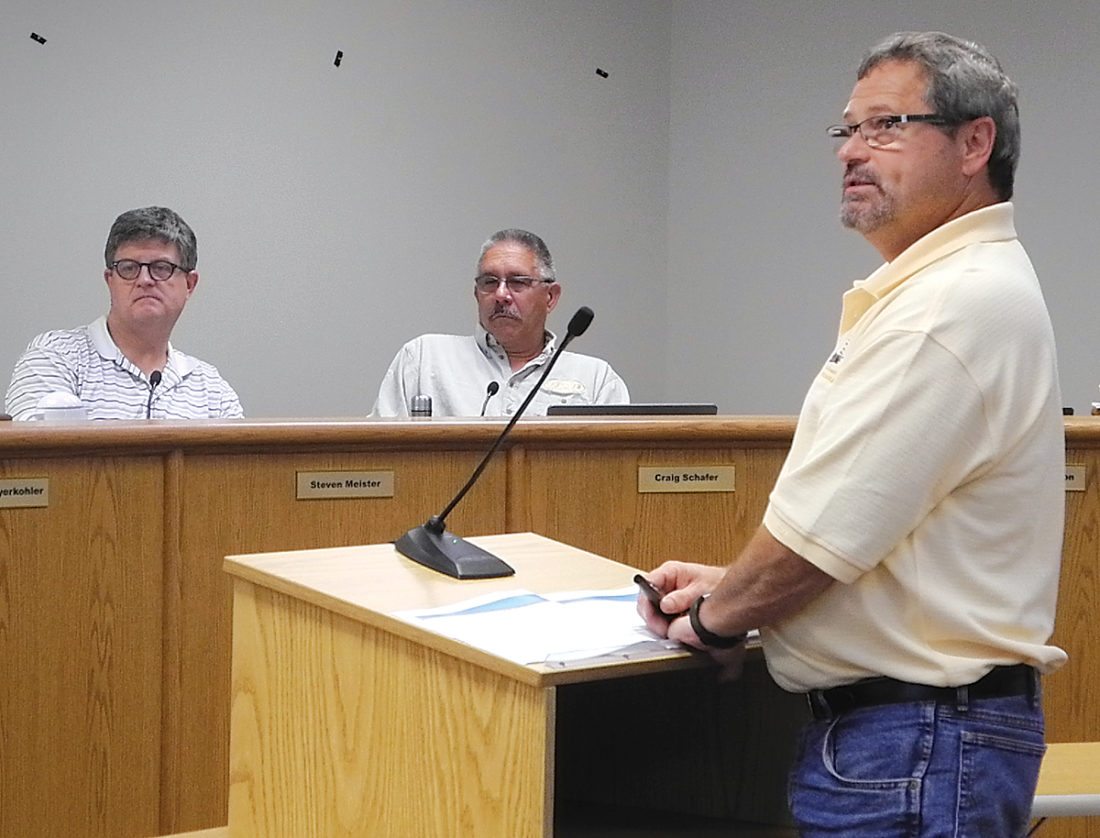 Photo by Deb Gau Bob VanMoer, manager of the Marshall city wastewater plant, spoke to members of the Marshall City Council on Tuesday night. The city is in the planning stages to pre-soften municipal water and hopefully reduce the amount of softener salt that ends up in wastewater.

MARSHALL — It’s an important — and expensive — issue for the city of Marshall, Public Works Director Glenn Olson said. Marshall needs to reduce the amount of salt being released into the Redwood River by April 2024. And while the city and Marshall Municipal Utilities have a plan to do just that, they’re also hoping to get some financial assistance to make it happen.

At Tuesday’s meeting of the city council, council members voted their support of a plan to address the problem by pre-softening city water. Having a certified plan in place could help improve Marshall’s chances of being awarded a state grant to help with funding the project, city staff said.

Bob VanMoer, manager of Marshall’s wastewater treatment plant, and Brad Roos, general manager of MMU, updated council members on issues related to cutting back chlorides in city wastewater. The wastewater plant operates on a permit from the Minnesota Pollution Control Agency, and the permit sets limits on pollutants that can be released into the Redwood River from the plant. The limits on chlorides — chemicals from water softener salt and road salt — will be more stringent starting in 2024.

VanMoer said it will be easier to pre-treat the water at the MMU water plant than it will be to remove chlorides at the wastewater plant.

“Once the salt gets in the water, it’s extremely hard to get back out,” he said. And Marshall is currently releasing around 13,000 pounds of salt into the river every day.

MMU has proposed to soften its raw water using lime and soda ash, VanMoer said. But the proposed upgrades to the water plant would cost around $9 million. MMU had applied for a $7 million state grant to help with the cost, but the request wasn’t funded, VanMoer said. In order to maximize the chances of getting a grant in the next funding cycle, MMU and city staff recommended the city have a certified plan and design for the water pre-treatment.

“If we greenlight it very soon, it will fit the timeline,” Roos said of a rough plan for the water softening project.

Plus, Olson said, it won’t be feasible to move forward without help from a state grant.

The design phase for the water softening project would cost an estimated $815,000, Roos and VanMoer said. MMU commissioners approved paying 10 percent of that cost and were proposing the city pay the remaining $733,500.

Under the resolution, the city would also commit to a capital contribution to the water softening project.

Council members voted to approve the resolution and support the water softening project.

If the city did nothing, said VanMoer and council member Craig Schafer, it would eventually face enforcement consequences from the MPCA.