Dayton: ‘I am here to listen’ 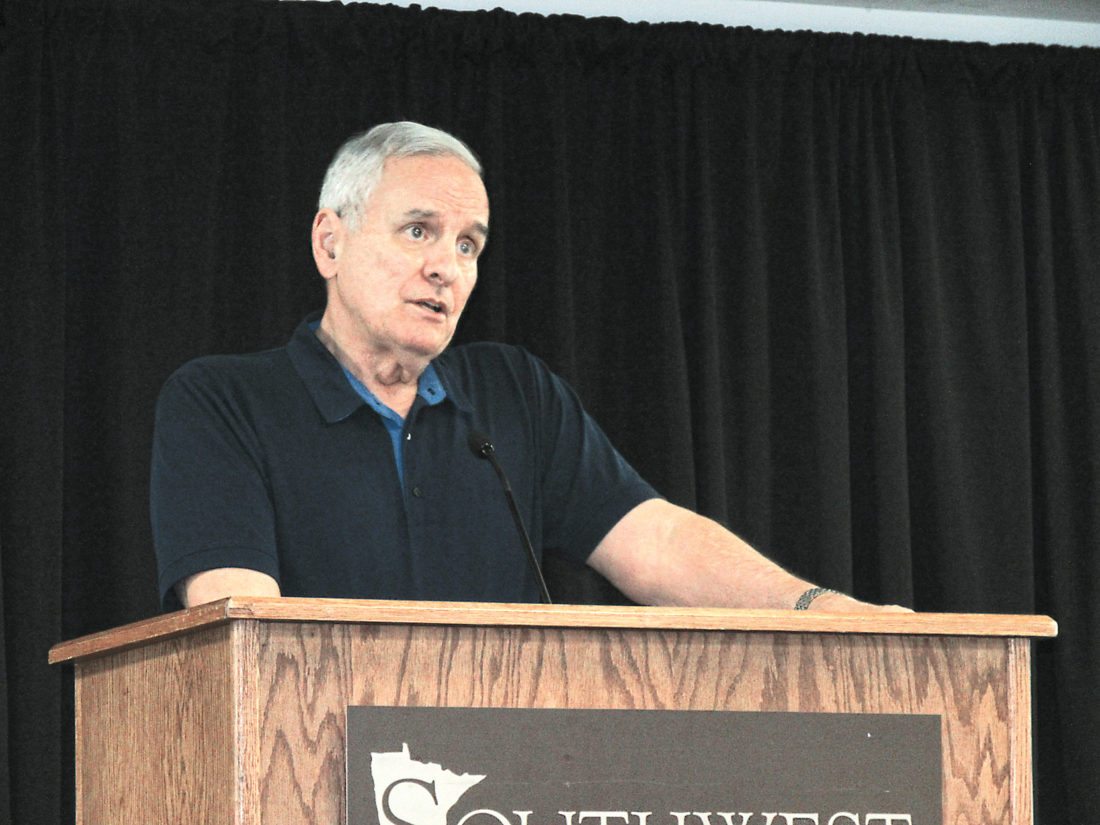 Photo by Deb Gau Gov. Mark Dayton spoke to a crowd of more than 200 people at SMSU Thursday night, during a water quality town hall meeting. Dayton later joined some small group discussions on how to improve water quality.

MARSHALL — In some ways, Gov. Mark Dayton said, his work for clean water started in southwest Minnesota. He was reading a 2014 draft report on contaminated water in the region, and was “shocked” by what he learned.

On Thursday, the topic of water quality came back to southwest Minnesota at a town hall meeting in Marshall. Dayton told a crowd of area residents that it was their chance to share concerns and ideas for cleaner water in the state.

“We each have a shared responsibility,” Dayton said, to see what we can do to protect our water.

“I am here to listen to you,” Dayton said.

Around 220 people attended the town hall meeting, which was held at SMSU. It was the third in a series of town halls, after similar events in Rochester and Mankato. A total of 10 town hall meetings are planned around the state.

“He was very attentive,” said Jeff Potter of Redwood Falls. Potter and fellow group member Marilyn Bernhardson said they were glad to see Dayton and members of his staff taking notes while he took part in the discussion.

“I think he listened,” said Lyon County resident Donald DeLanghe. “I hope my points got across.” While he was in the group discussion with Dayton, DeLanghe said he suggested using wet and dry dams for water retention, and that the state use more voluntary programs and incentives, instead of mandatory requirements.

Not all people who attended the town hall meeting had positive feelings, however. Doug Albin said Friday that it was “disturbing” to see representatives of state agencies present at the town hall. Having members of the Department of Natural Resources, the Minnesota Department of Agriculture, and the Board of Water and Soil Resources at the meeting could have influenced the discussion, he said.

While there was a lot of talk at the town hall about strip-tilling and planting cover crops, Albin said, he didn’t hear much discussion of concrete solutions for improving water quality — like stabilizing stream banks, for example. Albin said he was concerned that the town hall was instead going to lead to more meetings, and more spending for state agencies.

Although the state has appropriated millions of dollars from the Clean Water Fund to state agencies, Albin said, “I’m not seeing anything happen out here, other than monitoring and a few projects here and there.”

Part of the goal of the town hall meetings was to avoid deepening divisions or placing blame for water quality issues, Dayton said Thursday.

“We set up a structure where people aren’t giving speeches to an audience,” Dayton said. “We want there to be a dialogue.” Town hall participants were able to get that face-to-face dialogue, he said.

Dayton and other officials acknowledged that some previous water-quality measures — the buffer law, in particular — have not been well received. Dayton said he has been called a “buffer bully” by some Minnesotans.

“I think when it started out it seemed heavy-handed,” Dayton said. “That was my mistake.”

BWSR executive director John Jaschke, who was among the officials at Thursday’s town hall, said BWSR was working to be more adaptable and work with landowners on buffer law issues. Another important factor, Jaschke said, was that local governments were opting to take on enforcement responsibilities for the buffer law. Local control will be helpful in working together with landowners, he said.