Wind turbine noise too much for South Dakota homeowner 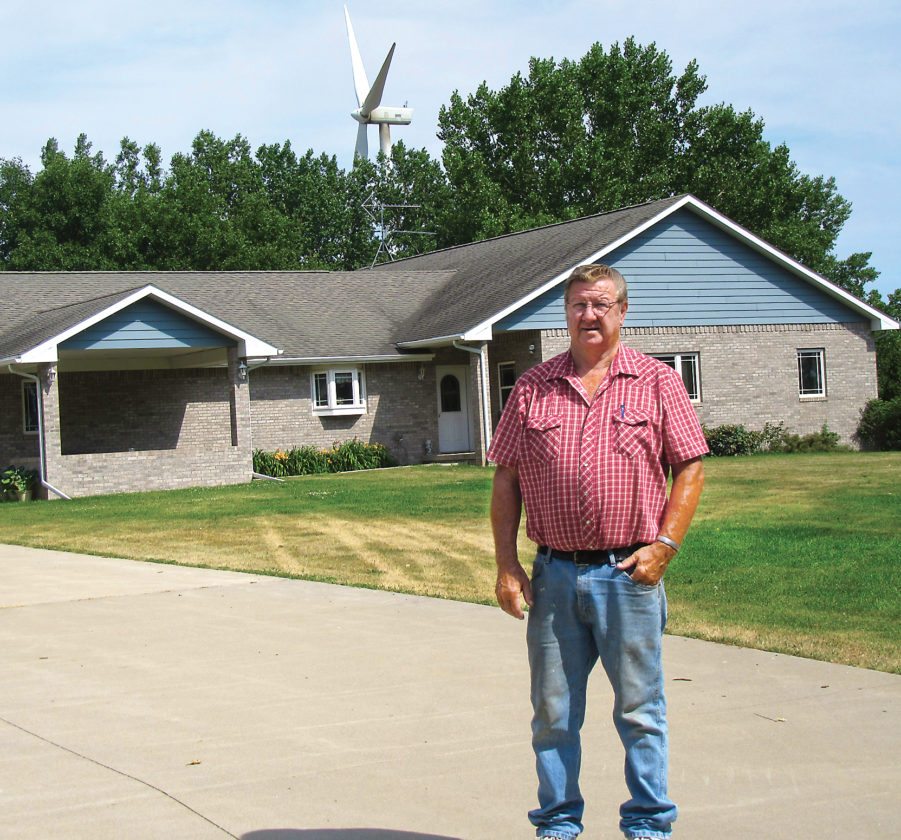 Photo by Jody Isaackson David Janes of rural Toronto, South Dakota, stands outside his home which is overshadowed by a wind turbine. His entire place is nearly in the middle of a wind farm, and the noise and shadow flicker are disturbing his peace in more ways than one.

TORONTO, S.D. — While the wind power companies tout the economic benefits of planting not one, but two wind farms in Lincoln County, some neighbors are fearing the possible negative impacts.

A Deuel County, South Dakota, resident says he found out the hard way there are drawbacks to having a renewable energy source in his backyard.

David Janes of rural Toronto, South Dakota, said he and his late wife had built a retirement home on their South Dakota farm site 17 years ago. They never suspected that the peace and tranquility of their location would be dramatically changed.

“I like to sit in the backyard and listen to the birds sing,” Janes said. “But when the turbines are running, I can’t hear the birds. All I hear is swoosh, swoosh swoosh, like a jet plane engine.”

The wind farm was constructed nearly 10 years ago and Janes said he never received a notice that his neighbor had sold the land rights to an energy company. He also said he was given no warning about how noisy the turbines could be, even at the 1,200 feet setback.

He also said he purchased special window shades for those times in the morning and evening that the shadow flicker from the rotating propellers creates quite a distraction inside the house.

“It gave us headaches,” he said. “They don’t have to be so close to people’s house. They’re not good for people to live near. They’re only good for farmers who don’t live near the towers.”

Janes has also noticed grease leaking from the turbines. The gray discoloration was slowly making its way down from the gear house at the top of the tower behind his house. He was wondering if that was going to slow down the energy production or just create an environmental hazard.

“I tried selling the place once, but there were no takers,” Jane said. He’s afraid property values have dropped because of the wind turbines that dotted the fields on three sides of his place.

The project manager for the Red Pine wind turbine project in Lincoln County vows her company will work with area residents to deal with any possible issues that may come up.

“As a company with more than 30 years of experience, we know the value that robust due diligence, preparatory analysis and siting research can provide to the community who will live in our project area,” Shanelle Montana said. “As an integrated developer, owner and operator since 1985, this is something we do not take lightly.  Should an issue arise during operations that affects a farming operations or household, we will work through every issue to identify a reasonable solution.”

Janes’ friend, Jim Ekholm of the Lake Cochrane area, is a opponent of wind farms and claims to have studied the their negative effects on neighbors. He claims that taxpayers end up paying for wind power twice. Government subsidies help pay farmers for the land on which wind towers are built, he said.

“The companies making money are using foreign materials and sending their profits off shore,” Ekholm said. “The Bloomington subdivision is from London, England. The power they generate cannot sell to electric companies without a government subsidy. The subsidies will go away in 10 years after they start.”

Ekholm said he’s all for clean energy, but wind power isn’t reliable because the wind doesn’t blow all the time, only about 35 to 40 percent of the time by Lake Cochrane, and that is the highest in the area, he said.

The other problem with wind towers is the human factor, Ekholm said.

“They’re very noisy. And, shadow flicker is extremely irritating. It gets into your mind,” he said.

Additionally, companies like to compare their wind turbines to the 40-foot windmills our grandparents had, but these are over four times that, Ekholm said.

“Wind companies try to tell residents we don’t have to worry about land restorations, but they should,” he said.

Ekholm also said wind energy companies tried to set up in Lake Cochrane, South Dakota, but residents around the lake are against it. They fear that the change in the quality of recreational life wouldn’t be worth it.

“Our laws are lax,” Ekholm said. “You’ll still hear the turbines a mile away, not just if a bearing is out. That’s something we shouldn’t have to live with.”

Ekholm said that every wind tower has to have a backup coal or hydroelectric plant because the wind lets up and/or the energy fades over great distances.

“Why are we dumping money into something that can’t run without subsidies?” Ekholm said. “It’s a fact that you’ll never see your taxes go down because of wind towers. The energy companies want townspeople to vote for it. Townspeople won’t have a problem with it because they won’t be living near the turbines) and will only see the money that will be coming back to them.”

Montana agrees wind does have a production tax credit from the federal government. But she said this credit is being phased out starting in 2020.

“Like every energy industry in the U.S. including gas and coal, the federal government has helped to spur innovation and domestic production,” Montana said. “Wind is now cost competitive. Many times beating out coal and natural gas.”

“By 2021, the utility expects wind will be its largest energy source — not in terms of capacity, but actual generation,” Fowke was quoted in the article.

“What’s even more amazing is the prices. We’re looking at (prices)in the low teens to low 20s (in dollars/MWh) — not starting prices, but levelized across the 25-year life of the project.”

“That beats gas, even at today’s prices,” he said. “I like to say we backed up the truck because the fuel of tomorrow was on sale today.”

Minneapolis leaders push ahead with efforts to change police