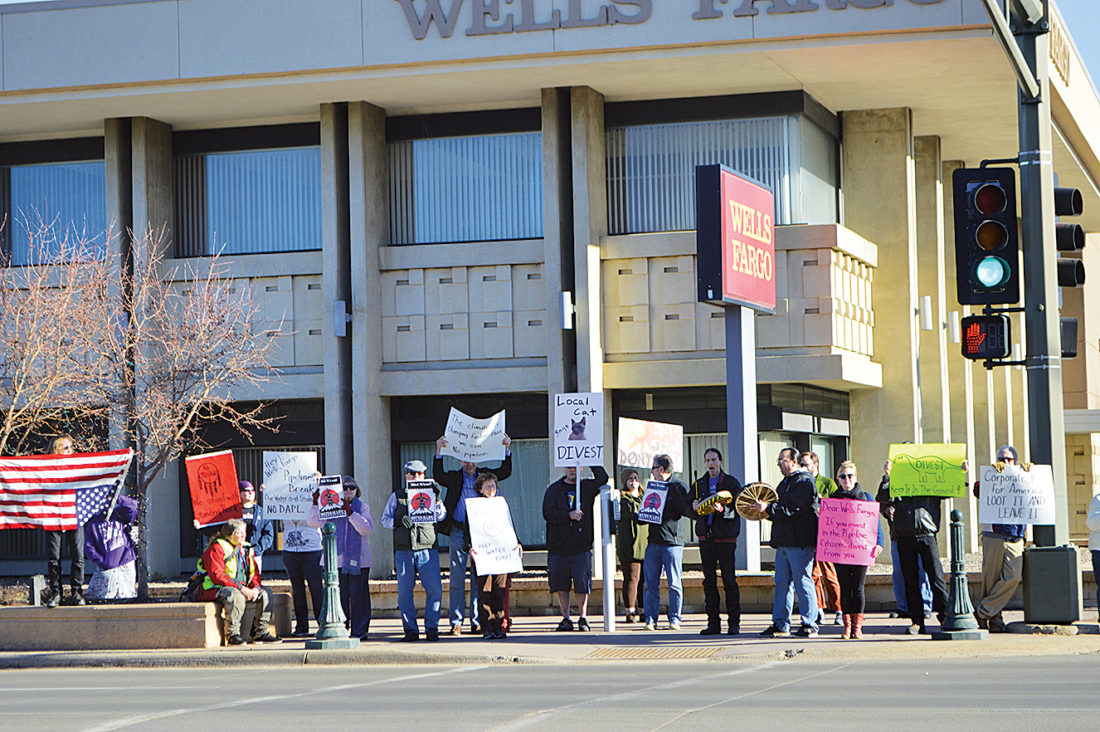 Photo by Karin Elton Protesters held up signs and chanted ‘hey, ho! This dirty pipeline’s got to go!’ during a Dakota Access pipeline divestment demonstration Friday morning at Wells Fargo on Main Street in Marshall.

MARSHALL — About 20 to 25 protesters lined an area in front of Wells Fargo Bank on Main Street in Marshall Friday morning.

Members of Marshall Area Peace Seekers in partnership with Water Protectors Collective held signs, beat drums and chanted to bring awareness of Wells Fargo’s role in the Dakota Access pipeline, a $3.8 billion project that would run from western North Dakota to Illinois, and is opposed by the Standing Rock Sioux Tribe because of potential harm to its drinking water. Wells Fargo is one of 17 banks directly financing the project.

Leo Gunner Baker of Granite Falls said he has traveled to and from Standing Rock since August.

He said, in North Dakota, people can “light their tap water on fire” from the hydraulic fracturing or fracking. Fracking puts chemicals in water to get to the oil.

“The chemicals are carcinogenic — poison,” he said. “They are pumping that through pipes. You can’t use that water again.”

Gunner Baker said the issue is “not just a native issue — this is a human issue. We’re just asking for clean water. Why is that such a big deal? I guess there’s not money in clean water.”

People ask him why is Standing Rock so important? He answers them that it is just one place defending their water, but it’s like a paper cut.

“One isn’t so bad, but a thousand, a million cuts can kill you,” he said.

In the middle of the protest a woman walked by and said she had just taken all of her money out of Wells Fargo Bank.

Mike Murray of Ghent also plans to switch from banking at Wells Fargo to a credit union. He protested Friday morning because of the “Standing Rock situation and all the other pipelines including Keystone.”

Murray said he should have pulled his money out from Wells Fargo earlier because during the 2008 economic crisis Wells Fargo was involved in “mortgage scams and were throwing people out of their homes.”

Individuals are pulling their money out and the city of Seattle recently cut ties with Wells Fargo over the Dakota Access pipeline.

According to money.cnn.com, Tim Sloan, Wells Fargo’s CEO, defended the bank’s role in the DAPL. He said Wells Fargo is just one of 17 banks providing a credit facility to Energy Transfer Partners, which is building the pipeline.

“We have an obligation,” Sloan said Feb. 8 at the Yahoo Finance All Markets Summit. “That credit facility was properly vetted and independently reviewed within Wells Fargo. We thought it made sense.”