Looking to the future — our children 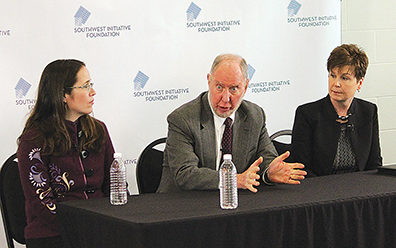 MARSHALL — In its 30-year history, the Southwest Initiative Foundation has focused on supporting growth in southwest Minnesota — often business and economic growth. But community needs are changing, SWIF President and CEO Diana Anderson said Thursday. In order to develop a future workforce, we need to look to the needs of our children.

“The data is telling us there is a growing opportunity gap in our area,” Anderson said. SWIF is adding a new area of focus, on children and communities, in hopes of closing that gap.

SWIF’s Grow Our Own Summit drew more than 500 people to Southwest Minnesota State University on Thursday to hear speakers and discuss strategies for helping ensure southwest Minnesota’s children have opportunities to succeed.

Some of the presentations at the summit laid out the challenges and opportunities children face today.

One in six children in southwest Minnesota lives in poverty, said SWIF Chairman Bob Thurston, in opening remarks at the summit. And due to widening gaps in opportunities for different economic classes in the U.S., some of those kids might not reach their potential. It’s a situation that can’t be ignored, especially if the region hopes to develop its future workforce and economy, Thurston said.

“We need to make sure young people and newcomers to our region . . . are set up for success,” he said.

In many ways, lots of opportunities have opened up for Americans over the past 50 years, said Robert D. Putnam, the keynote speaker at the summit. But at the same time, he said, “American society has become much more divided along social and class lines.”

Putnam, a professor of public policy at Harvard University, talked about the effects of that divide, which he examined in his 2015 book “Our Kids: The American Dream in Crisis.”

Putnam said not only are American communities today becoming more segregated by economic class, but there are other trends that make it harder for poor children to succeed, compared to 50 years ago. Children in lower-income, less educated households are more likely to have a single-parent family, spend less time interacting with their parents and are less able to pay to participate in sports or other activities outside of school. The isolation keeps children from learning the social and problem-solving skills that will help them succeed in life, Putnam said.

Putnam said Americans’ sense of community has changed, and that has helped set up these trends.

“Our sense of ‘we’ has shriveled,” Putnam said. “We used to think about all the kids in town as being ‘our kids.’ We’ve got to do that now.”

Putnam’s research had a national focus, but the evidence of an opportunity gap was also present in southwest Minnesota, said summit speaker Beth Mattingly. Mattingly, the director of research on vulnerable families at the University of New Hampshire’s Carsey School of Public Policy, shared information on Minnesota demographics and poverty that the Carsey School studied.

Mattingly said the information came from a variety of sources, including census data, Minnesota cost of living data and information from the Stanford Education Data Archive.

Mattingly also went over statistics on cost of living and poverty in SWIF’s service region. While living expenses in southwest Minnesota are low, wages are also among the lowest in Minnesota, she said. About 17 percent of children in the region are poor, which translates to about 11,000 kids total.

“Economic inequality has grown across the region,” Mattingly said.

Around 25 percent of children in southwest Minnesota are also facing risk factors to their success, like experiencing domestic abuse or excessive alcohol use in their families. More than 10 percent of children had a parent who is or has been in jail, Mattingly said. Young people in southwest Minnesota are also coping with substance abuse and mental health issues.

However, southwest Minnesota has some important strengths, Mattingly said. Participation in school sports is higher than the national average, and youth in the region report that they feel safe here.

“That’s good news, that they have a high level of engagement,” Mattingly said.

“In this region, you’re coming from a relative position of strength,” Mattingly said.

Putnam said there is some cause for optimism that things can get better on the national level, as well. We’ve done it before, he said. The invention of public high schools in the 1910s set the stage for lasting economic growth and greater equality across the country.

“It turned out to be the best public policy decision the U.S. has ever made,” Putnam said.

Today, high-quality early childhood education would be another crucial investment to make, he said.

A more complete report on the Carsey School study’s findings will be released in early 2017, Anderson said. SWIF will host community sessions to talk about the findings, and plan next steps.