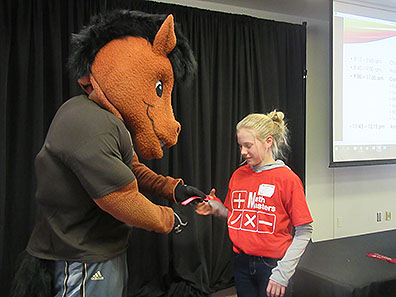 MARSHALL — It’s all a matter of numbers. Representing 15 schools from around the area, 40 teams, comprised of 20 fifth-graders and 21 sixth-graders, competed individually and as teams on eight sets of mathematical problems in the competition.

“Math Masters was a challenge, but I got through it and it was fun,” said Katelynn Jensen, a sixth-grader at Tracy Area Public School.

Dr. Heather Moreland, an SMSU mathematics professor who was the site coordinator for the event, said the students were excited for the day.

“They’re really gung ho,” she said. “It’s fun for them to come to a college. It’s cool to see them cheer for each other.”

Moreland said the event was a day to promote math.

“It’s to get students excited about math, not be phobic,” she said.

It doesn’t hurt that a possible side effect would be to promote SMSU.

“They can see SMSU as part of their future,” she said. “They can remember this great thing.”

The conference center at SMSU is a great location, Moreland said, large enough so the fifth and sixth grade can be combined.

“It’s nice for teachers not to have to go to different sites,” she said.

Amanda Zeug, the Tracy fifth- and sixth-grade math teacher, said students have been practicing for the competition since January.

“Math Masters is a good opportunity for students to practice their problem solving skills and work as team,” she said.

SMSU math professor Dr. Wije Wijesiri, was the master of ceremonies for the event. The students started out with a fact drill, then individual rounds, then team rounds.

Tracy sixth-grader Alex Munson said an example of one of the easier individual problems is “what is the sum of prime numbers up to 30?”

Moreland said the college’s food service provider, Chartwells, had healthful snacks on hand for the breaks between tests — water, bananas and pretzels.

Statewide sponsors include The Hormel Foundation and IBM.

Education Briefs for May 26

Campus Notes for May 21

Education Briefs for May 20

SMSU Briefs for May 14

Education Briefs for May 14

Education Briefs for May 12