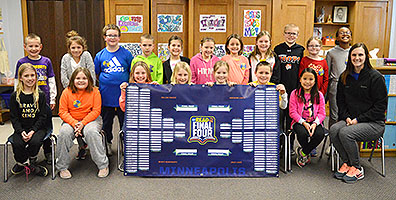 Photo by Jenny Kirk Holy Redeemer School teacher Dana Peterson and third-grade students pose with a banner of the bracket for the Read to the Final Four contest they have been excelling in and recently advanced to the next round in.

MARSHALL — Holy Redeemer School third-graders were thrilled when they recently found out they had qualified for the first round of Read to the Final Four which is similar to the March Madness-style competition.

“I think it’s kind of fun,” third grader Liam Beyer said about advancing as one of the state’s top-reading classes.

The Minneapolis Final Four Local Organizing Committee (MLOC) and the NCCA teamed up to offer Minnesota third-grade students the opportunity to take part in Read to the Final Four — a year-long statewide reading initiative that promotes and inspires reading for young people. The program is tied to the 2019 NCAA Final Four that will be taking place in Minneapolis in April.

A total of 275 schools participated in the reading contest, with more than 3.9 million minutes of reading recorded to date. Holy Redeemer School qualified among the top finishers for the Round of 68.

“It’s cool,” third-grader Carson Mensink said. “I like reading. We got started by getting this app and just reading.”

DeMuth said she thinks it’s “really cool” that she and her fellow third-grade students are among the top reading classes in the state. She added that she’s optimistic that they can continue advancing to the next rounds of competition.

Holy Redeemer School finished the first round as one of the top classes in the Great Lakes Region for the Read to the Final Four contest. The three other regions include: Rolling Prairie, Northern Lights and Mighty Mississippi.

“It’s a contest that is only for third graders across the state of Minnesota,” HRS teacher Dana Peterson said. “We’ve been tracking our progress as we’ve been going along. It’s always fun to go to the contest page. When we left on Friday (Jan. 25), we were in third or fourth place in our region, which has 51 teams. We kind of figured we were going to make it, but they went on the app (Thursday, Jan. 31) and saw they made it to the next round. It was very cool.”

The first round ended on Sunday, Jan. 27, but the third graders didn’t officially learn they had advanced to the next round until Thursday because dangerous weather conditions forced school to be canceled for three straight days.

“I believe the way it works is that for every two minutes you read, you get 10 points,” Peterson said. “It’s based off points, but it’s also averaged out so bigger classes and smaller classes can still compete against each other. I think the reason why they’re doing it this year is because Minnesota is hosting the Final Four this year for the NCAA tournament. There’s different prizes along the way.”

Peterson said HRS Principal Josh Langseth was the one who learned about the reading contest and shared the information with her.

“He heard about it from someone and passed it on to me,” Peterson said. “I said, ‘Well, it’s a free reading app for the year, so why not?’ We like to read a lot on Epic, which is another free reading app we use in school. Then when (Langseth) brought this to me, I found out it’s through Renaissance, which is like the Accelerated Reader program.”

Peterson said the third-grade students just started Accelerated Reader this year, so the compatibility is another benefit.

“After the students are done reading their books on the app, there’s a button that says, ‘Take a test’ and it’ll take them to a test and they can get (AR) points right there,” she said. “It’s really nice, especially since it’s our first year doing Accelerated Reader.”

Sunday is the cut-off for the Round of 68. The lowest-scoring school from each of the regions will be dropped, while the other 16 in each region will advance to the Round of 64.

“I hope (advancing) keeps them motivated to read,” Peterson said. “It started over in points and now there’s 17 teams in this region and the top 16 go on. From there, it cuts it in half each time.”

“There’s a lot less time in between each round now,” Peterson said. “We started in November and it ended on Sunday, so it was a long first round to keep them motivated to read. They like books on other apps, too, so sometimes I give them the option to read where they want to.”

The MLOC anticipates identifying a champion on Monday, March 18.

VFW art contest open to students The local Veterans of Foreign Wars Post 742 of Marshall Auxiliary is offering to ...

Schwarz named to dean’s list at Bethel The following student has been named to the dean’s list for academic ...