Called to serve: Pavek studying to be a pastor 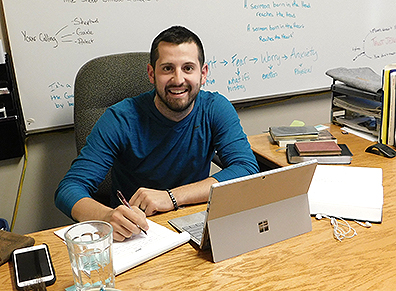 Photo by Jody Isaackson Living Word Youth Minister Greg Pavek gets some of his pastoral studies done at his desk at work and some at home. He said he spends about 10-15 hours online course work and can use his youth ministry experiences toward his seminary outcomes toward graduation.

MARSHALL — Having felt the call to ministry since he was in junior high, Marshall resident Greg Pavek has taken steps toward becoming a pastor.

“I was pretty young, about eighth grade, when I felt the calling to seminary,” Pavek said. “I didn’t know whether it was to be a pastor or a priest, but I knew the Lord was calling me to serve.”

Pavek grew up in Hendricks and had attended the Catholic church in Wilno prior to coming to Marshall to attend Southwest Minnesota State University.

It was in college that he became active in such campus ministries as the one sponsored by Living Word Lutheran Church, and he met the Rev. Dave Christensen who serves at Living Word.

“I was in Sioux Falls for almost two years when Pastor Dave got hold of me about an opening at Living Word as a youth minister,” Pavek said. “I had been open with (my wife) Erika from the start. She knew that becoming a pastor was probably in my future, so it wasn’t a surprise.”

Pavek took the job at Living Word just over three years ago, now having about eight years of youth advisory experience, including volunteer work. Last year he registered with Sioux Falls Seminary for online courses and is now working through its Kairos Program with a Lutheran Track. His goal is to do it in five years.

“The end date is unknown for sure, depending on how fast I can get things accomplished,” Pavek said, “but I started in 2017 and hope to be done by 2022.”

Additionally, he spends two weeks per year on-campus to meet a requirement in that regard.

“I like the flexibility of online classes,” Pavek said. “I take an average of 8-10 credits per semester.

The Paveks had a baby boy eight months ago. Baby Sawyer has been a blessing Pavek cannot deny.

“Being a husband and a father is a higher calling than being a youth minister,” he said. “You have to protect your time with the family.”

The one thing that makes it easier, makes it all work, is that his seminary classes are designed to give him maximum credit for duties he is already performing as a youth minister.

Over the course of time, Pavek has coordinated a half dozen youth mission trips and given as many sermons at Living Word. The sermon topics usually interconnect with the overall theme that the congregation is exploring with their other two pastors, Christensen and the Rev. Kelly Wasberg. These all count toward his course credits.

The most challenging thing about it is time management and decision making.

“It becomes tough to have a direction to go, what areas to track and when,” Pavek said, “creating a path.”

The seminary gave Pavek a large binder full of outcomes he has to meet before graduating, and a mentor team helps guide him in applying his ministry duties to reaching the outcomes required. The upside, he said, is that they don’t have to be accomplished in any special order.

“I have a personal mentor, a pastoral mentor and a seminary mentor,” he said. “They are good advisers. They say that my work experience provides ‘contextual education.'”

The courses themselves can be challenging, challenging the student to open up about what they believe.

“You’re always protecting what you think about God,” Pavek said. “In seminary, you have to open that door up a little and let it get touched. It allows you to go deeper (into your beliefs).”

Pavek enjoys working with people. It is one of his spiritual gifts.

“I feel like I connect well with the youth,” he said. “I can make groups of people feel at ease.”

Individual counseling, too, has been something Pavek has experienced in his youth ministry.

“A lot of people are struggling with their identity,” he said. “Who they are, not feeling like they are enough, having a lot of anxiety and feelings of inadequacy, struggling with family relationship issues and such. I offer support and guidance through the Scriptures. When you know what God says about us and the situation we’re in, we have to take our thoughts captive in obedience to Christ and to God’s Word which is true.”

Pavek has leadership experience, a teachable heart and believes that Christ is constantly making him a new person, he said.

“I know that in Christ I can help others have an incredible future,” Pavek said.

CDA and CCW to have Christmas party Monday

The Catholic Daughters of the Americas and Council of Catholic Women Christmas Party is planned for Monday in ...