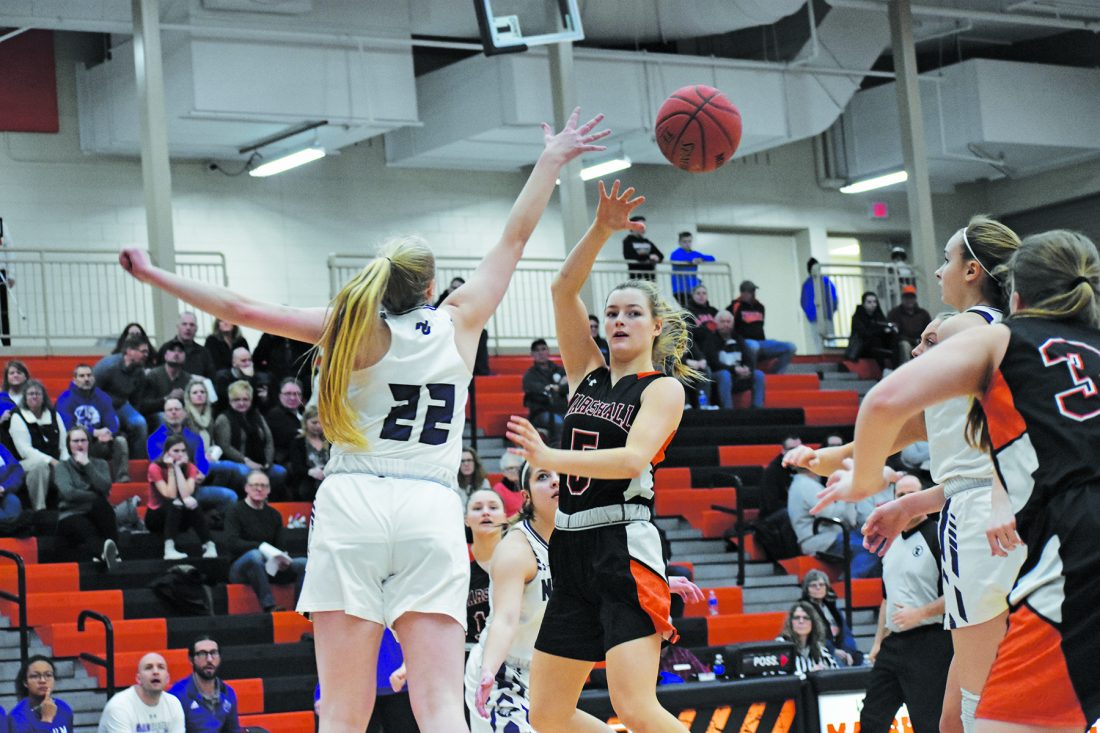 Photo by Sam Thiel Marshall’s Corrin Naughton passes the ball towards teammate Emily Meier during their Section 2AAA tournament game against New Ulm on Wednesday. The Tigers defeated the Eagles 78-38.

MARSHALL — After emerging from the regular season with a perfect record, the Marshall girls basketball team looked to get out to a good start to its postseason play against New Ulm. The top-seeded Tigers made a strong statement in their Section 2AAA opener, controlling the tempo on both ends of the floor en route to a 78-38 victory over the eighth-seeded Eagles on Wednesday night.

Marshall coach Dan Westby said even though they began with a slow start, he felt his team did a nice job of getting into the zone and creating a sizeable lead.

“Those first three or four minutes we actually kind of started slow,” Westby said. “Then our kids rallied, New Ulm came out in a zone and we were able to find some kids underneath and able to get a nice lead.”

The Tigers got out to a quick start, building a 5-0 lead thanks to two quick baskets by Jordyn Hilgemann before New Ulm battled back to cut the deficit to 7-6. Marshall would have to make some adjustments near the basket, as New Ulm’s size helped the Eagles control the boards early and deflect the Tigers’ shots or passes over the next few minutes.

Westby said the Eagles challenged them right away and forced Marshall to work for its scoring but added his team was able to make the necessary adjustments as the half progressed.

“I felt like New Ulm had too many offensive rebounds and we had a difficult time finishing inside,” Westby said. “We had some easy opportunities that we let get away but then the kids settled in a little bit and were able to clean some of those things up and build that nice cushion.”

As soon as the Tigers settled into a groove, they ran with it, quickly pushing a five-point lead to double digits thanks to the offensive duo of Hilgemann and Emily Meier. Then the Marshall defense was able to crank up the pressure, forcing several Eagle turnovers in the middle of the frame. With New Ulm’s offense out of sorts, Marshall took full advantage as a layup from Hilgemann made it 35-14 with six minutes left before Abby Wendorff connected on a 3-pointer to cap a 28-5 run by the Tigers.

Marshall was able to extend its lead to 30, but New Ulm continued to fight. The Eagles attacked the basket and drew a pair of 3-point plays to help spark a 9-0 run and cut the deficit to 44-23 with 2:40 to go, but Marshall got a boost of its own from Megan Wegner with three quick baskets to give the Tigers a 52-28 lead going into the locker rooms.

Looking to continue its strong play, Marshall jumped out of the starting gates in the second half, with Hilgemann leading the charge. The Tigers guard scored 12 quick points in the first three minutes of the frame to extend Marshall’s lead to 64-28.

Marshall’s defense continued to shine in the opening stages of the half, as the Tigers held the Eagles scoreless for eight straight minutes before going up by 40 near the midway mark. Marshall’s reserves helped close out the game, with the Tiger seniors getting a nice ovation in their final home game before Marshall earned the 78-38 win.

Hilgemann led the way for the Tigers with 29 points while Meier added 14 and Wendorff had nine. Meier led in rebounds with eight while Lenei Estrada and Corrin Naughton led in assists with four each. As a team, Marshall shot 45% from the field (31-of-69), including 13-of-19 from the free-throw line.

Westby felt several players were able to help make key contributions on the court throughout the night.

Defensively, Marshall held New Ulm to just 34% shooting (16-of-47) from the field, including 4-of-14 from 3-point range and allowing just two free throws while also forcing 30 turnovers.

Westby was pleased with their defensive efforts, especially in the second half when they went away from their press.

“We got out of our pressure there and sometimes that’s a concern because we just don’t feel like we defend as well when we’re not in our pressure,” Westby said. “So that was good to see us get out of that pressure and still be able to play some solid half-court defense.”

Marshall (26-0) will face No. 5 seed St. Peter on Saturday at 6 p.m. at Gustavus Adolphus College in St. Peter. The Saints defeated No. 4 Hutchinson 59-47 in the quarterfinals on Wednesday.

Westby said they need to be ready for the challenges St. Peter will bring on either end of the floor.

“They like to play a full-court game, so we’ll have to be ready for that and they have the ability to strike quick,” Westby said. “It’ll be a hard-fought game.”