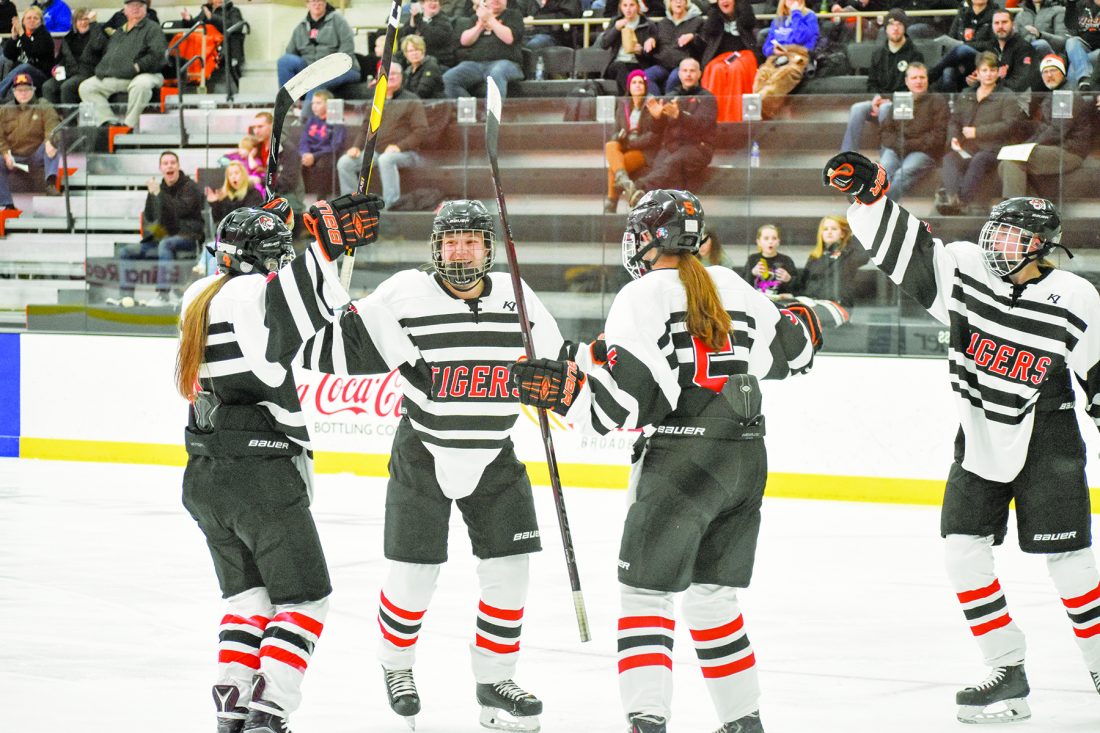 Independent file photo Members of the Marshall girls hockey team celebrate after scoring a goal against Hutchinson during their game on Nov. 13, 2018.

MARSHALL — For Marshall girls hockey captains Logan Sherman and Kaitlyn Timm, the transition from tying their volleyball shoes to lacing up their skates for the hockey season had to feel like an overnight process.

The two Tigers, only days removed from their consolation championship match in the Class AA volleyball tournament, will leave the court behind in favor of a fresh sheet of ice at Burich Arena in Hutchinson today for the Marshall girls hockey team’s first game of the season.

Though the shift was a rapid one for the pair of captains, as well as sophomore forward Tessa Gannott, Marshall coach Cassi Weiss is looking at the quick turnaround from a positive standpoint.

“The good news is that they’re in shape if they were in volleyball so they’re definitely prepared for the game (today),” said Weiss. “Now it’s just a matter of getting some lines together, getting them vibing with each other and starting to get that team chemistry.”

The team chemistry will start at the top for the Tigers as this year’s team will be lead by captains Alexis Moat, Timm and Sherman. Sherman, Moat and Mikayla Jones are the only three seniors on this year’s team after Marshall boasted six last season.

In spite of the small number of seniors, Weiss says all three of them possess strong leadership qualities that will make a large impact on this year’s team.

“I think that all of our seniors are natural leaders, Logan especially. Just being on the ice is a really great way for her to lead the team and she doesn’t have to do much because people really look up to her,” said Weiss. “I think that her hard-working attitude is going to come into play huge at practice and (today) in the game as well.”

With a limited number of upperclassmen and large shoes to fill in the absence of graduated seniors Sydney Mauch and Olivia Peterson, the team will count on younger players like forwards Kalyn DeVlieger, Reagan Loft, Leah Schaefer and Gannott to use their experience gained from last season to take another step this season.

If the underclassmen on the team can emerge and contribute, Weiss said one of their two goals will have been met.

“I think state is always the number one goal for us, but not only that just developing those young girls like we talked about,” said Weiss. “We’re a young team, so developing them into varsity-ready players so by mid or end of the season they’re right up there with the top seniors (is our goal).”

Ensuring that the other goal of a state tournament trip is met will come down to the work of the team’s highly-talented upperclassmen. Two-way defensemen Emelia Barker and Sherman, 20-goal scorer Timm, as well as dependable goaltenders Moat and Emma Klenken are poised to build off a successful 2018-2019 season and elevate their game to another level in 2019-2020.

The group will look to get the season started on the right path today with a win over the Hutch Tigers in a rematch of last year’s season-opener. Weiss said the team will simply need to play its game and work hard in order to be successful.