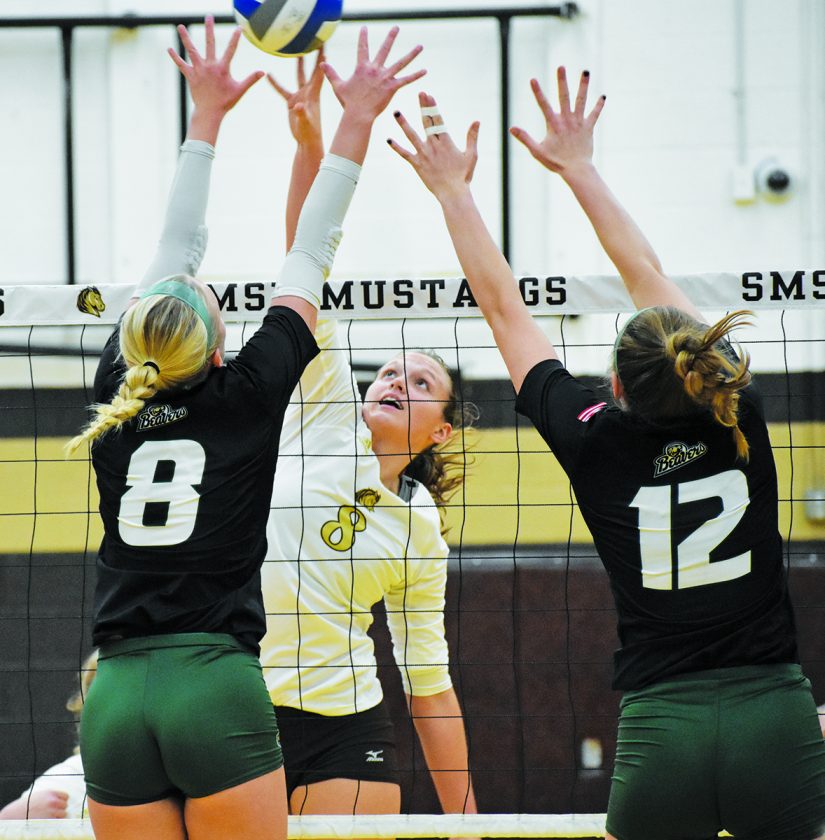 Photo by Sam Thiel SMSU’s Lydia Sussner tips the ball over a pair of Bemidji State University defenders during their match on Friday. The Mustangs defeated BSU 3-0.

MARSHALL – After a tough stretch on the road, the No. 12 Southwest Minnesota State University volleyball team returned home looking to put a four-match losing streak out of sight and mind. The Mustangs would face a Bemidji State University opponent that was also looking to put a lengthy streak of its own to rest, as SMSU held a 26-match win streak going into the match.

SMSU coach Terry Culhane thought that after a long roadtrip, his team was able to come out ready to play and do a lot of good things throughout the match to come away with a key win.

“We just played a tough stretch and we didn’t find ways to win in some of them. You don’t want to make that a habit, so it was good to come back home and play,” Culhane said. “I thought we were mentally ready to play and for the most part I thought we did. There’s always things to improve on, but I thought we did a lot of good things; I thought we were able to move the ball around a little bit and use all of our hitters.”

The Mustangs raced out to an early lead in the opening set, grabbing a 7-3 advantage before BSU climbed back and went on a 7-1 run of its own to go up 10-8. SMSU retaliated quickly, using an Emma Thomssen kill before a service ace from Angela Young put the Mustangs back in front at 14-12. The run didn’t end there for the home team, as SMSU earned the next six straight points to extend its lead to 20-12 before taking Set 1, 25-16.

Just like they did to start the match, the Mustangs got out to another strong beginning in Set 2 with another 7-3 lead. SMSU would maintain a slim advantage throughout the next several points, as a Zoe Lier kill gave the Mustangs a 14-7 edge, but BSU hung around and eventually cut the deficit to just two at 22-20 to force a SMSU timeout.

Coming out of the timeout, the Mustangs were in search of a quick spark and found it through the play of Jenna Walczak and Lydia Sussner, who teamed up for three kills to help give SMSU a 25-21 second-set victory and a commanding lead in the match.

Set 3 was tightly contested in the beginning stages, as the two teams traded points until SMSU created a little breathing room at 8-6. Still looking for more separation, the Mustangs would do just that when Rachel Fink went to the service line and came up with a pair of aces while Lier chipped in a couple of kills to make it 13-8.

Both teams then traded points over the next few possessions, but SMSU continued to keep its distance from BSU with at least a seven-point lead before ultimately taking the final set 25-16 to earn the bounce-back win.

Young said their key on the offensive end was just staying in system and being able to spread the ball around to multiple hitters.

“I think what really worked well for us was just being in system and being able to use everyone,” Young said. “Outside, middles, right side; our middles and Jenna on the right were big parts of that and they did an amazing job. We got good looks and they put the ball away for us.”

Defensively, Payton Hjerleid led in digs with 16 while Erin Corrigan and Young each added 15. SMSU also recorded four total blocks on the evening, with Walczak and Sussner each picking up two block assists. As a team, SMSU held BSU in check, limiting the Beavers to just a .130 hitting percentage, including sub- .100 marks in the first (.075) and third (.029) sets.

Culhane felt their ability to have a solid serving night threw BSU off-balance with its passing and they were able to tighten their defense as a result.

“I think probably (it was) our serve. When teams struggle passing-serve, you don’t have to defend all of the options, both blocking-wise and back row-wise,” Culhane said. “You can kind of make the court smaller, so to speak, and you can get double blocks in places you normally can’t if they’re passing the ball on the setter’s head,” Culhane said. “So I think that was a big thing in our game and we talk a lot about how important serving is and how important serve-receive is. We give each player a score with those and I thought for the most part, it was pretty good.”

SMSU (12-6 overall, 6-4 NSIC) will continue its homestand today with a matchup against the University of Minnesota Crookston at 2 p.m. Young said they know they have to take things one match at a time and just continue to play hard as a team.

“I think just still knowing that we can’t take anyone for granted, it’s shown in our past and we just need to keep playing hard moving forward,” Young said.