PREP VOLLEYBALL: Wabasso comes up short in home tournament over the weekend 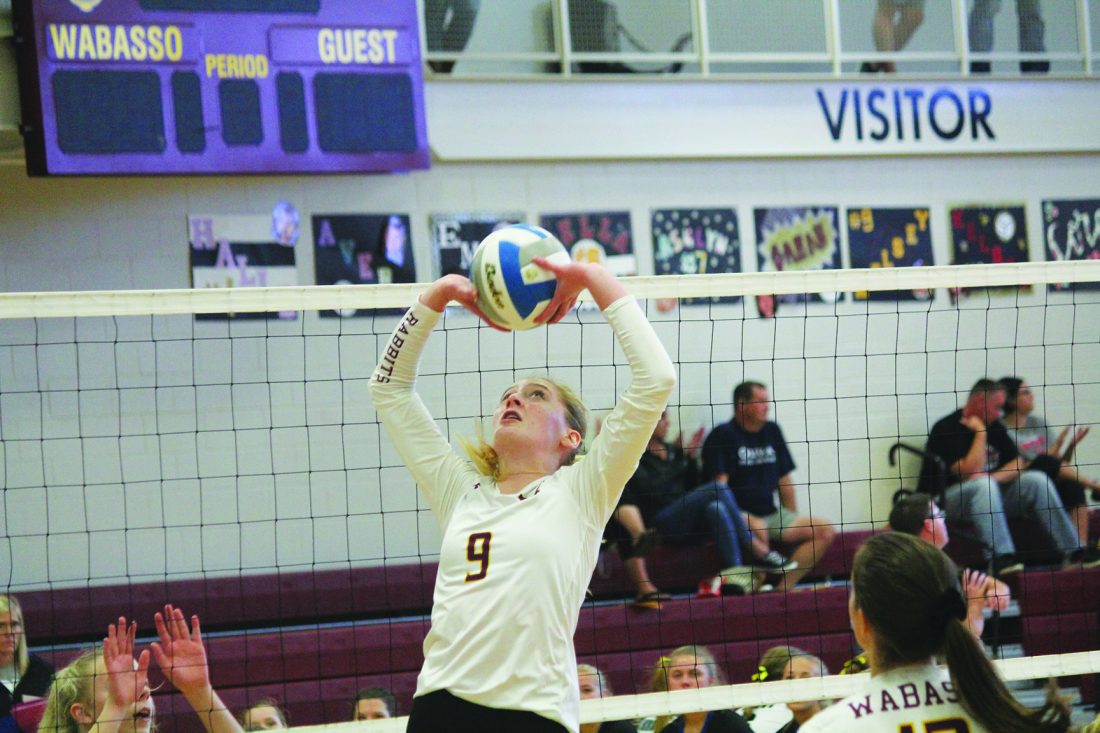 Photo by Jake Przytarski Wabasso’s Kelsey Frank sets the ball during their game against MACCRAY in their home tournament on Saturday.

WABASSO – The Wabasso volleyball team played host to an eight-team tournament on Saturday and finished their slate of matches with an 0-4 record after falling to Redwood Valley, Southwest Minnesota Christian, MACCRAY and Central Minnesota Christian.

Though the Rabbits were unable to find the win column, coach Barb Johnson says there’s a lot of things that the team can take away from the tournament in preparation for upcoming matches.

“I think we had parts of every single game that we looked really good,” said Johnson. “We played well as a team, and then we had parts where we really showed our youth and inexperience out there. Overall, we didn’t get any wins today, but I think we did learn a lot and hopefully improved a lot as a team. So hopefully we can really take this and build now into the playoffs and to our next games.”

The Rabbits dug deep in Set 1 of their first match and went point-for-point with the Cardinals as the two teams traded leads twice before Wabasso took an early 9-6 lead that forced a Redwood Valley timeout. The break would prove to be effective the rest of the way through with the Cardinals able to bounce back via a 6-3 run to retake the lead at 12-11. Redwood Valley would remain in control by outscoring Wabasso 13-5 the rest of the way to take the set in a 25-16 final.

Following a fast start in the previous set, the Rabbits were forced to play catch up to start the second as the Cardinals opened up play with a 6-1 run. An ace by Allison Fenger helped the Rabbits to regroup and climb back in contention with a 8-6 run to cut the deficit to three at 12-9. Redwood Valley responded with a stretch in which they outscored Wabasso 5-2 and continued to stave off the Rabbits comeback attempt by sealing the match win with a 25-22 victory in Set 2.

With continuous struggles behind the service line plaguing the Rabbits, Wabasso was unable to keep pace with the Eagles from start to finish in the opening set. SWC got off to a quick start by taking an 11-4 lead that grew to 21-12 down the stretch. A pair of kills by Cora Eichten and Sarah Franta provided a boost late but it was not enough to take the set as the Eagles held on in a 25-16 final.

Johnson says the serving errors will need to be addressed in upcoming matches if they want to come out on top.

“(It) kind of went with the rest of the day. We had points where we served really good and got some aces and then we’ve had quite a few misses as well and we really have to start eliminating those errors in order to win more games,” said Johnson.

Flipping the script from the first set, Wabasso was able to get a quick 2-0 lead that grew to 7-3 early on. Quick to respond, the Eagles recovered and took their first lead at 8-7 following three consecutive aces. The momentum generated by the run helped carry SWC to a dominant finish in which they outscored Wabasso 17-3 to take the set 25-10, and the match 2-0.

In the final match of pool-play, the Rabbits took on the eventual champions of the tournament, the Wolverines. After struggling in their previous match, Wabasso provided MACCRAY with all they could handle in the opening set by matching their pace to knot the score up at eight apiece early on. MACCRAY responded with a 9-3 run to take a 17-11 lead midway through, but the Rabbits climbed back to cut it to within one at 19-18 following a block by Eichten. The comeback attempt would fall short in the end, though, as the Wolverines took the set 25-21.

The Rabbits once again got off to a fast start in the early goings of the second set by taking a 4-3 lead following a kill by Fenger and retaking the lead again at 5-4 following a kill by Eichten. The Wolverines would recapture the lead at 8-7 and never looked back the rest of the way with an efficient attack proving to be too much for Wabasso to handle in a match-sealing 25-15 victory.

Wabasso will be back in action today when they travel to Granite Falls to take on Yellow Medicine East at 7:15 p.m.