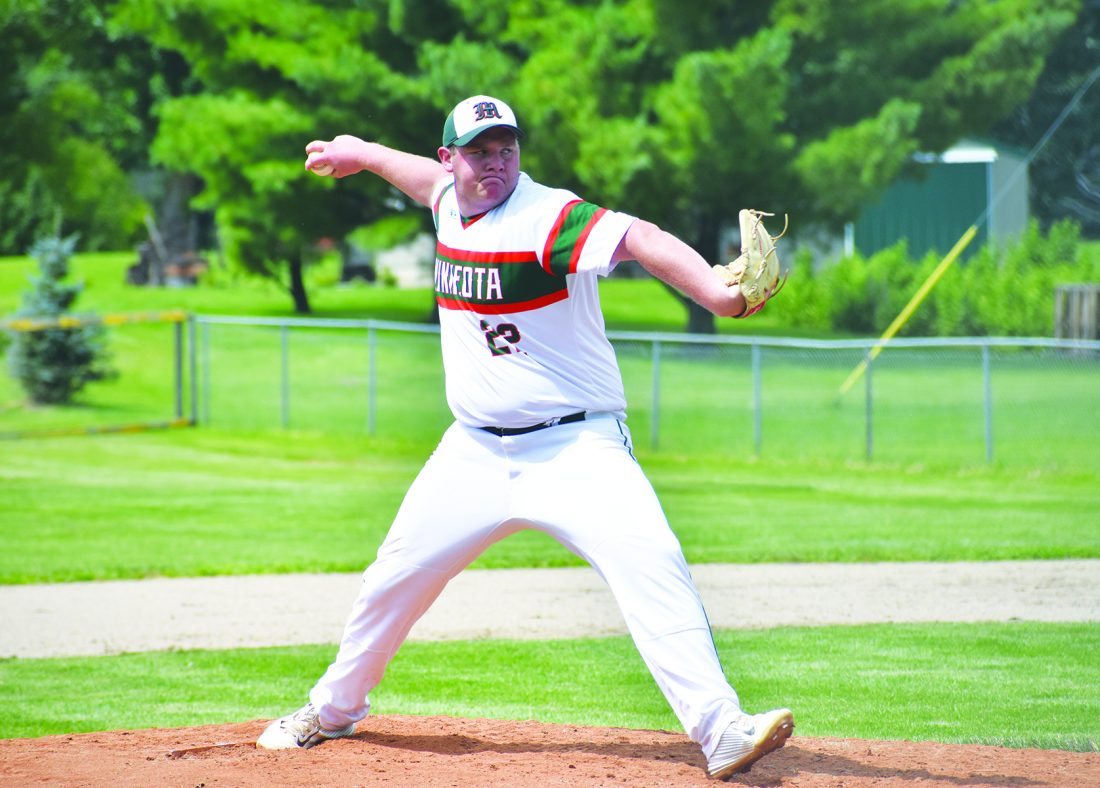 ROSEN – After dropping a tough loss on Friday to Morris, the Minneota amateur baseball team looked to bounce back in order to keep its season alive in the Region 9C tournament. Unfortunately for the Mudhens, they weren’t able to piece together a string of hits enough to produce a run as Minneota fell to Clinton 2-0 on Sunday in Rosen.

Despite the final outcome, Minneota manager Tyson Sonnenburg is proud of the way his team competed all season long.

“We just couldn’t hit the ball; it’s one of those things where we’ve been hitting the ball all year long and putting up runs and then (Sunday) just wasn’t our day,” Sonnenburg said. “It’s the way it goes sometimes, unfortunately it had to be today but we had a nice season. Historically, it’s been the best season we’ve had as a team and we’ll get one of our top players back next year and hopefully we can make a deeper run.”

With both teams on the verge on elimination, the Cards and Mudhens knew a strong start would be a key factor. Clinton was able to strike first in the top half of the second, using a single and a stolen base before a fielder’s choice and an error brought in the game’s first run.

Neither side would be able to get much going on offense throughout the next couple of innings, as Clinton’s Sam Adelman and Minneota’s Peyton Nuy were locked in a pitcher’s duel.

The Cards then took advantage of a leadoff walk in the fifth before capitalizing on a pair of singles to plate a run and extend their lead to 2-0, which would hold the remainder of the afternoon.

Beau Buysse, Alex Pohlen and Danny Hennen led the way for Minneota with a hit apiece.

Nuy finished his outing on the mound by going all nine innings while allowing just two runs on nine hits and striking out four. Sonnenburg said he was pleased with Nuy’s performance on the hill and felt he did a great job of keeping their team within striking distance all game.

“Peyton pitched a great game, very proud of him,” Sonnenburg said. “He’s been a great guy to have around this season and he’s pitched really well for us and here he was getting up in the count often and was keeping the hitter’s off-balance. He pitched awesome and kept us in the game and that’s all we can ask from him.”

Minneota finishes its season with a 20-7 overall record. Sonnenburg said their biggest takeaway is they’re still a young team and was proud to see the growth they’ve had as a group and knows they’ll be ready to make another run next year.

“I think we’re one of the better teams in the league and we just have to come through during playoff time and I think we’re still growing together,” Sonnenburg said. “We’re still a pretty young team and hopefully next year everybody’s ready to come back and get it going and make a deeper run. I’m proud of the guys, they had all-around an awesome year and hopefully we can come back and do it again next year.”