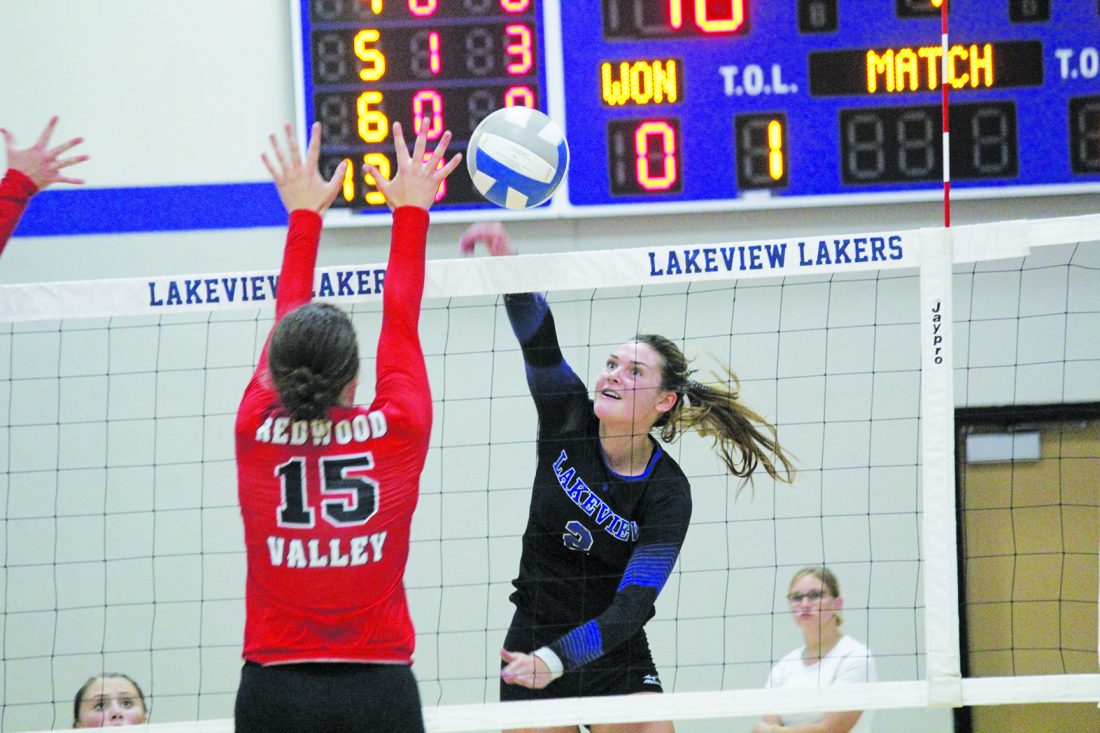 Photo by Jake Przytarski Lakeview’s Savanna Louwagie follows through on an attack during their match against Redwood Valley on Thursday. The Lakers defeated the Cardinals 3-1.

COTTONWOOD – The Lakeview volleyball team earned a statement win over Class AA Redwood Valley in Thursday’s season opener matchup at home as the Lakers were able to rebound from a tightly-contested first set loss to sweep the final three sets and take the match 3-1.

After falling to the Cardinals weeks earlier in a lopsided scrimmage, coach Stephanie Hennen identified their improvement in communication as a big factor in the win.

“I thought we talked a lot more (Thursday). We scrimmaged them in Minneota about a week or so ago and we knew that they had strong hitters and we knew we had to play good defense to be able to hang with them,” said Hennen. “I thought our kids did a nice job of sticking to our gameplan and staying home on defense. We missed a few more serves than we wanted to but it’s early in the year that’s to be expected.”

Hennen says the victory provides a nice boost to the team’s confidence that sets the tone for the rest of the season.

“It’s a good confidence booster. You always want to win the first one of the year so that’s great,” said Hennen. “It was a good win for us.”

The Lakers ran into a bit of trouble early on in the opening set as the Cardinals seized control and jumped out to a 9-4 lead. Guided by strong hitting displays by Bradlyn Gniffke and LeAnn Stensrud, Lakeview was able to recover and chip away at the deficit by outscoring the Cardinals 14-9 and knot the score up at 18 apiece. It would not be enough, however, as Redwood Valley held on to take Set 1, 25-23.

Between sets, Hennen encouraged her team to put it behind them and focus on winning the second set.

“First games are always hard. Everybody’s nervous, coaches too,” said Hennen. “We just talked about one set does not define us, we’ve got a lot of volleyball left here to play so let’s just go out there and get after it. We knew we were right with them. I think knowing that after scrimmaging them and getting beat so bad by them at the scrimmage I think that knowing that we can hang with them really helped us.”

Flipping the script to open the next set, it was the Lakers that came out of the gates red-hot by taking a commanding 12-6 lead to force a Cardinals timeout. Savanna Louwagie kept the momentum going with a service ace out of the break, but Redwood Valley slowly but surely mounted a comeback that brought them to within two with the score 18-16. Unfazed, the Lakers re-established the momentum and took Set 2, 25-18.

After winning the third set 25-20 to pull ahead two sets to one, the Lakers were forced to dig deep in order to stave off the Cardinals attempt to force a fifth set in a back and forth thriller. The two teams tied five times before they were once again all square at 19-19. Showing their grit, the Lakers kept battling and came away with a 25-20 set win to take the match 3-1.

Leading the way for the Lakers in kills were Stensrud (15), Louwagie (12), Savannah Rausch (9) and Gniffke (8), while Sidney Geistfeld and Kiana Imes paced the club in digs with 20 and 10 respectively. Kaitlin Fischer finished the game with 43 set assists, and Louwagie (2), Geistfeld (1) and Stensrud (2) provided the team’s five service aces.

Next up for the Lakers is a Camden Conference matchup with Dawson-Boyd on Tuesday at 7:30 p.m. in Cottonwood.