‘He lives on through that court’ 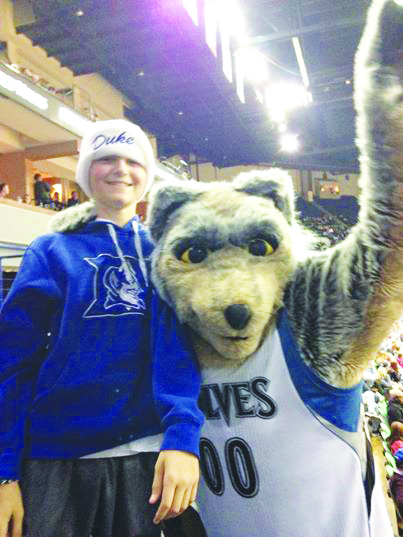 MARSHALL - It’s been a little over four years since the community of Marshall was grief-stricken by the passing of 14-year old Carter Boerboom after a year and a half-long battle with Ewings Sarcoma, a rare bone and soft tissue cancer.

Though he’s no longer with us, his messages of optimism and living life to the absolute fullest has continued to inspire and live on through the CarterStrong foundation. CarterStrong has been seen all over Marshall, including most recently at Tiger basketball games, where members of the team wore warmup jerseys with CarterStrong printed across the chest in remembrance of Carter, who would’ve been a senior that season.

Today, the love and support that the community has for Carter will be put into action once more with the unveiling of Carter’s Court, a renovated basketball court in Independence Park established as a result of winning the Minnesota Timberwolves’ “Our Courts. Our Future.”

Here’s how CarterStrong and Carter’s Court became a reality:

During his courageous fight, a story shared by Carter’s father Wade Boerboom about his son’s positive outlook on life made the newspaper and inspired the community to reach out and help the family in their time of need.

“He was at the Mayo Clinic and I asked him to rate his quality of life and he said a 10,” said Boerboom. “You know the kid has cancer and he says 10 and the newspaper ran that story and I think that really moved a lot of people. How a kid sick with cancer still is enjoying life to the fullest the best he can. He still lived a great life up until he couldn’t anymore so I think some of those stories really touched the city. As far as support from the city it was incredible.”

After Carter’s long battle with Ewings Sarcoma came to an end, the community immediately stepped in to assist financially with donations made to Carter’s school, Holy Redeemer. Soon after, an unknown member of the community set up an account at Bremer Bank that helped establish the CarterStrong foundation.

“We got a lot of donations and things to help out with the cost of the funeral. He went to Holy Redeemer School so we’re telling people just do donations to Holy Redeemer,” said Boerboom. “I’m not 100% sure who originally set it up, it wasn’t even us, but somebody put up a thing at Bremer downtown here and today if you want to do donations to Carter’s family there’s an account that we opened up at Bremer so all of a sudden that account has $4,000 in it and we’re like wow.”

With the money raised, the Boerboom family soon began holding events like the 5K color run and 3 on 3 basketball tournaments before selling Team Carter shirts that eventually became CarterStrong. Before long, the foundation had enough money to award a scholarship in Carter’s name.

Though CarterStrong was making great strides, the family had a bigger goal set in mind to commemorate Carter in the most fitting way possible.

During the most challenging periods of Carter’s treatment, the Boerboom family could always find solace through their love of sports, especially basketball.

“Even when he was sick in the hospital and didn’t feel the greatest we could always flip a game on and talk sports,” said Boerboom. “Sports is just a way that him and I always connected and you could always no matter how bad a day you were having talk about sports.”

On multiple trips to the hospital located in Sioux Falls, S.D., the Boerboom family would drive past Pipestone where they came across numerous basketball courts. Given his passion for the sport, an idea was born that helped set Carter’s Court in motion.

“Carter and the rest of the family went to Sioux Falls to the doctor a lot and we always drove by these basketball courts in Pipestone,” said Boerboom. “So it just got me thinking that would be really cool if there was a court named after Carter because that’s one of the things that he loved to do and we used to do all the time. We’d sit in the driveway and the kids would play hoops in the driveway all night long. And of course he was a Timberwolves fan and a Duke fan.”

With the goal now set, the Boerboom family sought to find out what it would cost to turn their idea into reality. After a few financial roadblocks upon finding out what the cost would be, they turned to the Timberwolves and the “Our Courts. Our Future.” program that takes nominations for courts around the state to be refurbished. The rest is history.

“This year Preston (Stensrud) at the city said ‘Hey I’m going to nominate Marshall and you guys should nominate Marshall so we probably nominated Marshall 20 times to try and get on that Timberwolves/U.S. Bank Our Courts. Our Future,” said Boerboom. “So Marshall qualified for it and then we actually won it of course, but there was so much support in the community and everybody voting on their phone and on their computer and on their work computer and voting as many places as they possibly could and we won it by quite a bit from all the support in the city.”

After winning the vote, progress stalled before ramping up again in the weeks leading up to today’s unveiling in order to get it all done in time.

Now that the day has finally arrived and the court is officially open, Geske calls it a blessing that her son will love on through the memories made on it for years to come.