AMATEUR BASEBALL: Buttermakers get tripped up by Cologne in opening round of state tournament 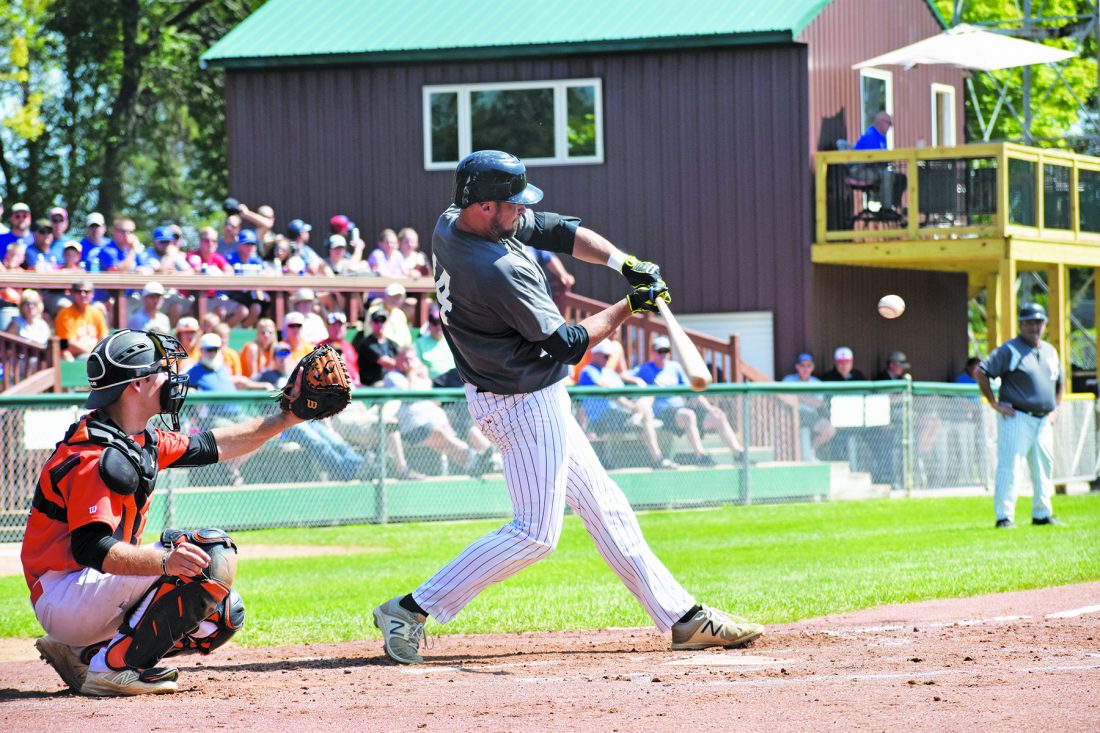 Photo by Sam Thiel Hadley’s Nick Bruning swings at a pitch during their Class C tournament game against Cologne on Saturday in Delano. The Buttermakers fell to the Hollanders 5-2.

DELANO – It was a battle of experience against youth between the Hadley Buttermakers and the Cologne Hollanders in the opening round of the Class C tournament on Saturday. With Hadley making its fifth consecutive trip to state on one side and Cologne reaching the tournament for the first time in 47 years, both ballclubs looked to start its state quests on the right foot.

Unfortunately for the Buttermakers, a four-run seventh inning by Cologne ended up being the difference, with the Hollanders earning a 5-2 victory.

Despite the final outcome, Hadley manager Myron Bennett said they had opportunities to take advantage and just couldn’t capitalize but knows they have to hold their heads high for making it to this stage of the season.

“A very tough way to end the season, we battled back and finally got the score tied and then we got a little sloppy in the field and had a couple of chances there at the end, but it just didn’t work out our way,” Bennett said. “But it’s been a good year; early in the season, if you would’ve told me our last game of the year was going to be in Delano, we’ll take that anytime. Anytime we’ll take our last game at the state tournament, you’ve got nothing to be ashamed of doing that.”

The Hollanders looked like they were going to strike right away in their opening at-bat, as a leadoff double and stolen base put a runner on third with no outs but Hadley starter Sam Erickson was able to keep them right there by getting three quick outs to escape the early-inning jam.

Cologne would waste little time getting on the scoreboard, though, as a walk led off the second inning before a sacrifice bunt and an RBI single quickly put the Hollanders up 1-0. Hadley had a chance of its own to respond in the bottom half of the frame by loading the bases, but a strikeout ended the threat for the Buttermakers.

After the early offense, both teams turned to their pitching and defense throughout the next several innings. Erickson and Cologne starter Christian Johnson traded scoreless frames, as the two pitchers settled into their respective zones.

With just two hits on the board, Hadley entered the bottom of the sixth in search of a spark. The Buttermakers were able to capitalize, as Joe Larson got things started with a single before Nick Bruning got aboard with a single of his own. After a strikeout, Max Zwart stepped up and reached on a fielder’s choice, with an error on the play bringing in a run to even things up at 1-1.

After Hadley fought back to tie the game, both sides looked to get the momentum back in their control. Cologne would get the first opportunity in the top half of the seventh, using a leadoff single before a wild pitch, a sacrifice fly and a walk to put runners on the corners with two outs. An ensuing error on a pickoff attempt plated a run before another error and a walk loaded the bases for Cologne. The Hollanders weren’t done there, however, as back-to-back singles produced three runs to give Cologne the lead back at 5-1.

Despite the deficit, Hadley continued to put together a rally in the late innings, as singles from Larson and Eric Wieneke and a walk from Zwart loaded the bases before a fielder’s choice from Blake Rogers brought it to within three at 5-2 in the bottom of the eighth. An inning later, Hadley would get a baserunner aboard when Justin Benda was hit by a pitch with one out, but a flyout and a groundout ended the Buttermakers’ comeback hopes and ultimately their season.

Erickson took the loss on the mound, tossing the first six innings while giving up just two runs on eight hits and striking out two.

Bennett said Erickson did a good job of keeping the Cologne hitters guessing throughout the afternoon.

“Sam was keeping them off balance, he was mixing his curveball well and once in a while, he’d sneak a fastball by them,” Bennett said. “He’ll do that to you every time; he just got a little tired there at the end.”

Larson led the way for Hadley with two hits while Benda, Bruning, Wieneke and Trent Carlson all added one and Rogers collecting an RBI.

Going into next year, Bennett said their biggest takeaway will be hopefully having their core players returning and was proud of the way his team continued to fight all season.

“I think we’ve got some young guys coming around, Justin Benda had a good game and he’s played well for us all year and most of our older guys will hopefully stick with it,” Bennett said. “We started slow and kept battling away, and I’m proud of the way the guys played all year.”