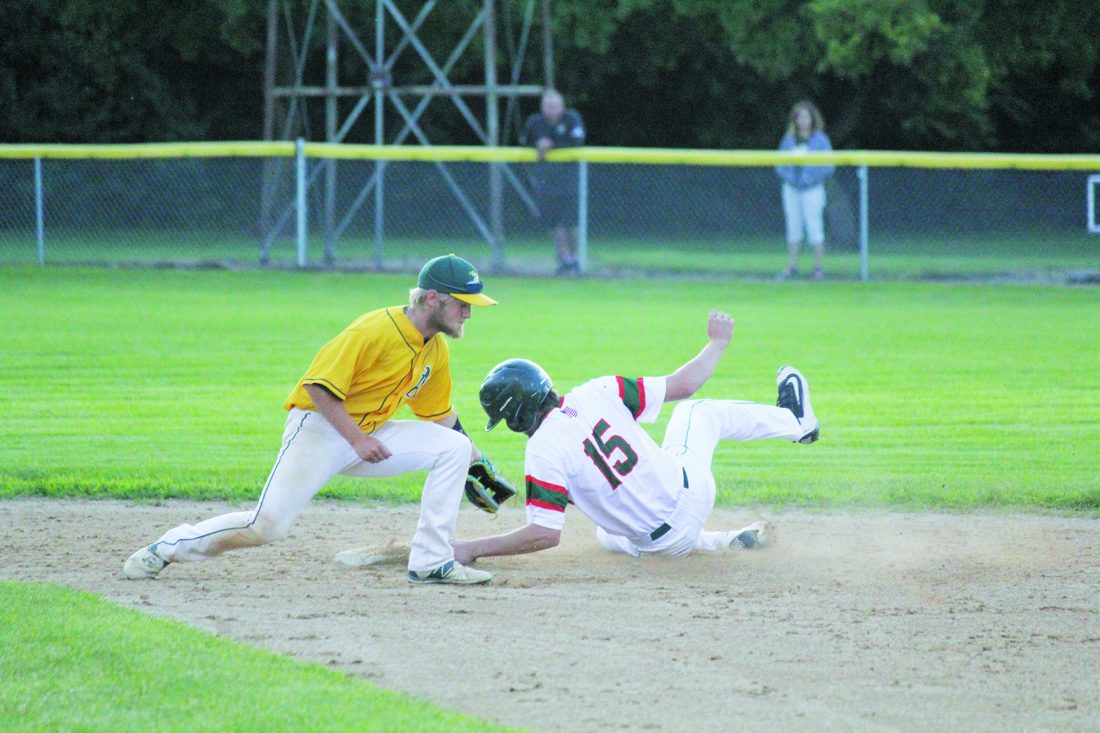 Photo by Jake Przytarski Marshall’s Alex Thompson tries to tag Minneota’s Brant Buysse during their game on Wednesday. The Mudhens defeated the A’s 8-7.

MINNEOTA – The Minneota Mudhens (17-4) extended their winning streak to five games on Wednesday with a down-to-the-wire 8-7 victory over the Corn Belt League-leading Marshall A’s (12-3).

With the win, the Mudhens have now won 10 of their last 11 games, while the loss for Marshall snaps a six-game unbeaten streak.

Marshall’s leading hitter in the contest, Peyton Grant, got the A’s on the board in the top of the first inning with his first of three hits. An error in the ensuing at-bat scored the second run for Marshall and another RBI single, this time by Zach Olson, pushed the third run across to give the A’s a 3-0 lead after an inning and a half.

The Mudhens were quick to respond with a three-run frame of their own to follow as Preston Nuy got the inning started with a single and later scored on a bases-loaded walk to Austin Devlaeminck. Minneota’s leading hitter Jake Leighton concluded the scoring with a two-RBI single to knot the game up at three apiece. Leighton would finish with a game-high four RBIs.

In the bottom of the fourth inning, Minneota took its first lead of the game after Jesse Drager led off with a single and later scored on an error in the field by Marshall to make it 4-3.

In Marshall’s next time up to the plate, the deficit was erased with a single swing by Jordan Mernaugh, who drove in two with a single to give Marshall the lead once more at 5-4.

After the Mudhens tied the game up at five in the latter half of the inning, Marshall scored its final two runs of the game in the top of the sixth inning on an RBI single by Connor Winkelman and another by Alex Thompson.

Now trailing by a pair of runs, the Mudhens punched in their sixth of the game on an extra-base hit by Austin Buysse. In the following inning, Leighton drove in a pair to give the Mudhens the 8-7 victory.

A total of four pitchers took the mound for Marshall in the contest beginning with Nick Macchio, who remained on the hill for three innings giving up three earned runs on two hits and recording one strikeout. Logan Terfehr took over for an inning and gave up one unearned run on one hit.

Mernaugh pitched two innings for the A’s giving up a pair of earned runs on four hits. Winkelman finished the game for Marshall and gave up one earned run on one hit and tallied two strikeouts.

The A’s will return to Legion Field on Friday for HOF/Bremer Bank Night in which they’ll take on the Milroy Yankees at 7:30 p.m.

Next up for the Mudhens is a road matchup with the Dumont Saints on Saturday at 4 p.m. Minneota and Dumont are currently the only two teams without a loss in the Land O’ Ducks League.