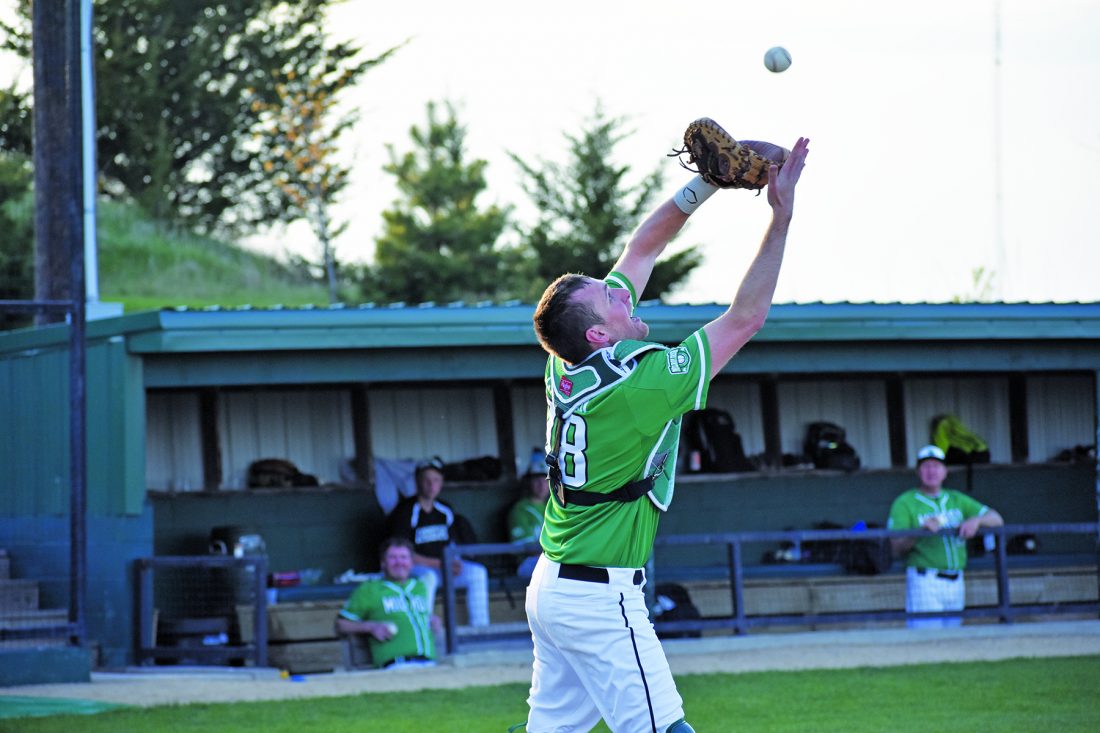 Photo by Sam Thiel Milroy’s Luke Dolan catches a popup during their game against Hadley on Wednesday. The Irish defeated the Buttermakers 12-4.

MILROY – After starting their seasons on a solid note, the Hadley Buttermakers and Milroy Irish looked to continue their early season trends on Wednesday night. The two ballclubs went back-and-forth to start, but it was Milroy who capitalized on a six-run fifth inning to create separation en route to a 12-4 victory at Irish Yard.

The Buttermakers jumped out to an early lead in the top half of the first, as Eric Wieneke connected on a broken-bat RBI single and Trent Carlson had an RBI single of his own to make it 2-0. But the Irish quickly responded with a pair of runs of their own in the bottom of the frame, with Derek Riley smacking a two-run single to tie things at 2-2 after one.

Milroy would take its first lead of the night in the next inning thanks to an infield single by Dominic Dolan but Hadley answered for two more runs in the top of the third. Kellan Johnson led off the frame with a solo home run to left before Chris Halbur connected on an RBI single to give the Buttermakers a 4-3 lead.

In the bottom of the fourth, the Irish used an infield single from Moses Dolan and a sacrifice fly from Dominic Dolan to bring in a run before Tyler Peterson connected on a single to plate another run and put Milroy back in front.

An inning later, the Irish were able to break out the bats, getting a leadoff walk from Anthony Dolan and a single from Riley to put runners on first and second before a two-run single from Tyler Patterson made it 7-4. Dominic Dolan would get a single to bring in a run before Brady Lanoue lined a triple off the wall that plated three more runs and push the Irish lead to 11-4. Milroy would add a run in the bottom of the eighth to bring it to the 12-4 final.

Peterson earned the win on the mound, going six innings while allowing four runs on seven hits and striking out seven.

Johnson led the way for Hadley with a 2 for 5 day at the plate, including the home run, and one RBI while Wieneke, Carlson and Halbur all added RBI base hits.

Carlson took the loss on the mound, going 4.1 innings while allowing seven runs on seven hits and striking out two.

The Irish will face Brookings (S.D.) on Friday at 7:30 p.m. while Hadley will face Luverne on Sunday at 2 p.m.