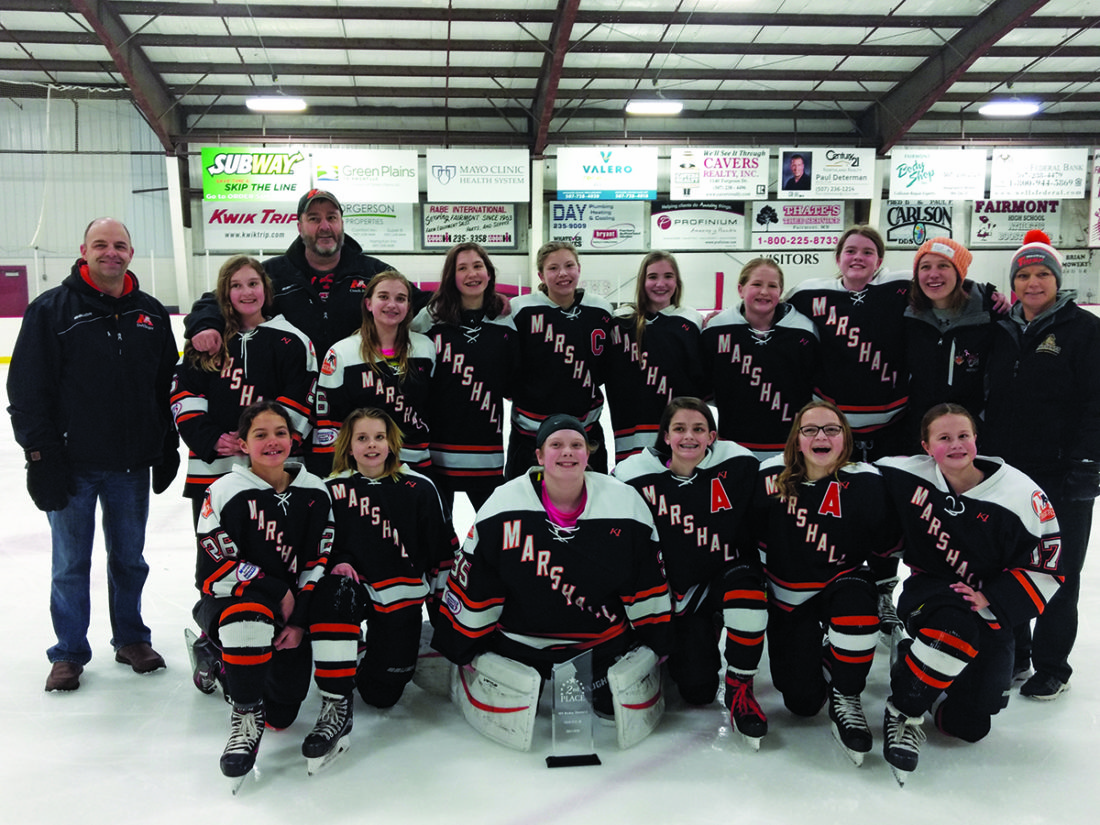 Photo courtesy of Marshall 12U Girls Hockey The MAHA 12U Girls hockey team poses with their second place trophy after defeating Worthington 9-0 to advance to the Minnesota Hockey Regional Tournament for the first time in program history.

MARSHALL – The Marshall Area Hockey Association had a successful weekend with two teams advancing to Minnesota Hockey Regional Tournaments. The 12U Girls are making their first-ever appearance in a regional tournament while the Pee Wee A team is making their third consecutive trip.

The 12U Girls team went 3-1 over the weekend in Fairmont, defeating Windom 9-1 and Worthington 7-1 before falling to New Ulm/Sleepy Eye 6-3 on Sunday. The Tigers came back to defeat Worthington 9-0 to capture the second seed, advancing to the National Regional Tournament.

Paige Christianson was solid in goal, recording 53 goals over the four games. Offensively, Kayln DeVlieger led the way with 13 goals and four assists while Piper Mellenthin added five goals and six assists. Regan Loft pitched in four goals and three assists to go with a two goal, two assist performance from Olivia Penske. Jessica Stucker came away with 2 goals and an assist on the weekend while Kylin Kooima and Kayta Waltz scored 1 goal and five assists and one assist respectively.

The 12U team will be in action again on March 2-4 when they travel to Luverne for the regional tournament.

The Pee Wee A team overcame an early loss in the District 4 tournament to earn the second seed for the Pee Wee A South Regional Tournament. The Tigers went 4-2 over the weekend, defeating Redwood Area 3-0 before suffering a 3-1 loss to New Ulm/Sleepy Eye. Pee Wee A then won three straight, defeating Lakes Area 9-1, Fairmont 4-1 and a payback 4-1 win over NU/SE to advance to the championship game, where they fell to Luverne 10-0.

Lincoln Mellenthin had 100 saves over the first five games for the Tigers and Jared Reinsma led all scorers with 12 goals and an assist, which included three hat tricks, one of which was a four-goal performance. Andrew Seanor pitched in with three goals and an assist while Corbin Beernaert and Sam Schwarz had two goals, three assists and two goals, two assists respectively. Chace Mellenthin added a pair of goals and an assist on the weekend while Malachi Klemm and Talan Plante each tallied a goal and five assists. Parker Schmitt (three assists), Zachary Kramer (two assists) and Joey Fossum (1 assist) added valuable help.

The Tigers will advance to the regional tournament for the third straight time, going as the second seed from District four to the South Regional, which will be held in Hastings March 2-4.

A 6-1 win over Lakes Area on Thursday for the Pee Wee B team was the lone win in the District 4 tournament as the Tigers fell to NU/SE 7-4 on Friday and to Luverne 7-4 on Saturday.

The Bantam B hockey team went 2-2 in the District 4 tournament, defeating Windom and NU/SE while falling To Redwood Area and Worthington.

Brittany Howard looks past and forward ahead of the Grammys