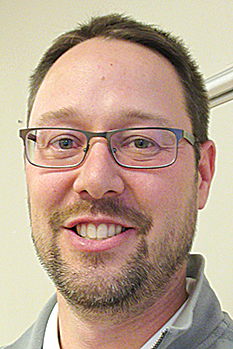 MARSHALL — The city of Marshall is facing a big year for construction as an extensive renovation project at the city hall building is about to start. It’s one of the reasons why it was a good thing Public Works Director Glenn Olson gave plenty of advance notice about his plans to retire, city staff said Tuesday. While Olson is planning to stay with the city until June, the city had a chance to get a new public works director and city engineer in place before construction season begins.

“We are transitioning this plan well ahead of the June 12 resignation date,” said City Administrator Sharon Hanson. “There was discussion on the timing of this. And the complexity of the job, the many projects the city is going to take on this year, and including not doing a transition in the middle of construction season, we felt there was an advantage in putting (assistant city engineer) Jason Anderson into the position in February, rather than waiting until later.”

Marshall City Council members voted to appoint Anderson as public works director, effective Feb. 3. Olson will still be working through the transition, and will serve as an owner’s representative for the city hall building until June 12.

Hanson said the city personnel committee met last week to discuss transition plans with Olson’s retirement. Anderson has had experience working with Olson, and has done a good job in his time with the city, she said.

“Glenn leaves quite a void in the process, and it’s going to take some time to bring anyone on,” said council member John DeCramer. “I think we’re very fortunate that we have Jason well on track to take care of this.”

Marshall Mayor Bob Byrnes said he wanted to thank Olson both for his service to the city and for thinking about how the city would continue those services as he retired. Before Olson was hired as public works director, Byrnes said, the city had a hard time filling the position.

“This is a difficult position to recruit for,” one that requires both good engineering and communication skills, he said.

Council member Glenn Bayerkohler asked what would happen to Anderson’s position as city planning and zoning administrator if he was appointed public works director.

“Right now, the assistant engineer oversees that department. Under the proposed structure, we’re looking at having the public works director oversee that department for now,” Hanson said. Anderson was put in charge of the city’s community planning division after a restructuring of the city building department.

“I’m wondering, why is it that we changed it, and now we’re changing it back?” Bayerkohler said.

“Ideally, we would continue to have the same structure,” Hanson said. But a new assistant engineer would not have the same level of experience in that department as Anderson. For now, Hanson said, the city will keep the continuity of having Anderson oversee the planning division.

Bayerkohler also questioned the need to have Anderson become city engineer right away in February.

“Jason is very informed. I don’t see the need for a big transition here,” he said.

“I did feel it was important for me and for the city to have extra time,” Olson said to council members. “I know it’s a really big job.”

In separate actions, council members also voted to advertise for a new assistant city engineer; and to approve an employment agreement with Anderson, to go along with his appointment to public works director. Under the agreement, Anderson will be paid a salary of $111,072 a year starting Feb. 3.

Taking in a movie

US court dismisses suit by youths over climate change